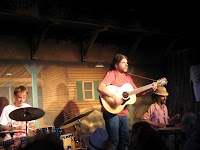 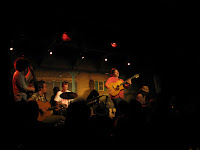 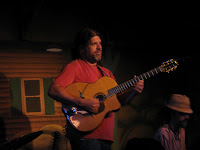 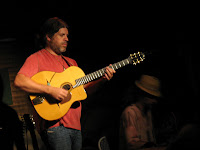 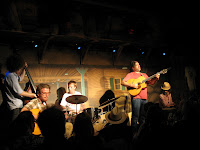 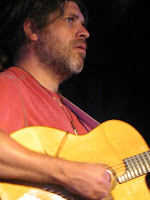 I've seen some really good shows this year, but on Wednesday I saw what was probably the best concert of the year so far - Stephane Wrembel at The Coffee Gallery Backstage in Altadena.

The Coffee Gallery Backstage is an intimate and strange venue. When you enter, you actually pass right by another stage, which is a bit awkward when someone is performing. Then you head to the back where there is a sign that says "Backstage." It's pretty warm in the hallway there, but fortunately the room was actually cooler (important in Los Angeles in the summer). There are large model planes hanging from the ceiling, and the wall behind the stage is painted to look like a feed store, or grain storage. There is certainly a casual atmosphere, which I appreciate. I also appreciated that all the chairs had cushions.  The place seems to seat fewer than a hundred people, and it was mostly an older crowd. Before the show, Stephane told me that the sound is pretty good in this venue, and he wasn't kidding. It sounded perfect.

The band took the stage promptly at eight o'clock (actually, they were on stage at 7:59).  "We're here to take you on a journey," Stephane Wrembel told the crowd before launching into the first tune of the night, "The Voice From The Desert," the opening track from his new release, Origins.  And indeed, he took the crowd on many journeys.  Each song had its own path, and sometimes within a song there were many different locations or destinations.  The band then went right into "Momentum."  This song featured a wild, wonderful jam with some incredible energy and fantastic drumming by Nick Anderson.  And it was the first time of the night that I became completely mesmerized by Stephane Wrembel's playing.

After "Momentum," Stephane talked a bit about the road, about the tour. By the way, he spoke without a microphone, which was one more thing that added to the casual and intimate atmosphere.

"The Edge" was another highlight of the first set. It's a fast-paced, wonderful tune with some cool stuff on percussion and some absolutely wonderful work by Dave Speranza on bass. And of course Stephane Wrembel was glorious on guitar.

The band ended the first set with an excellent version of "Prometheus." The song began with a nice long guitar solo by Stephane Wrembel. Then there was some amazing stuff on drums by Nick Anderson. And Roy Williams, the other guitarist, did a lead section, which was seriously impressive. And David Langlois did some amazing work on percussion.  Just an all-round wonderful rendition.

The first set was just under an hour.

After a fifteen-minute break, the band started the second set with a short piece called "Back To The Light." Stephane played the 12-string on that one. That led into "A Child's Dream."  Both of those songs are from Terre Des Hommes. And then they played "Bistro Fada," that wonderful tune that Stephane composed for Woody Allen's Midnight In Paris.  This version featured a nice section with the bass as the lead instrument.

The second set also featured an absolutely amazing rendition of "Water Is Life," as well as "The Selfish Gene"  (a song inspired by the book by Richard Dawkins) which was a lot of fun, particularly the section where the percussionist and Stephane Wrembel went wild.

But the song which featured a serious drum solo was "Train D'enfer" (which Stephane Wrembel said means "frantic pace" before they started). This song started with some crazy percussion, and then was almost wonderfully chaotic at moments. This was the song where each member of the band was really given a chance to shine. There was a section with just the bass player and drummer (Nick using his hands rather than sticks or brushes), and then a section with just the two guitarists and bass player. And then Stephane Wrembel did a wonderful guitar solo. The song didn't end there, however. It was after that that we got the fantastic drum solo.

"Train D'enfer" led right into "Carbon 14" to close out the night. Stephane Wrembel did band introductions during this song.

If you get the chance to see this band perform, don't pass it up. They have several more dates in California and then Oregon before heading east to Massachusetts.

Posted by Michael Doherty at 7:45 PM