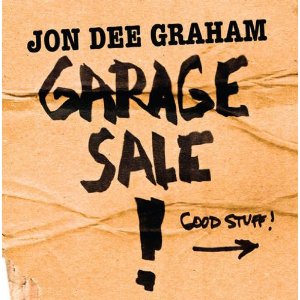 Jon Dee Graham is known for his work with The Skunks and The True Believers, and most recently with The Hobart Brothers And Lil' Sis Hobart.  He's also played with John Doe, Patty Griffin, James McMurtry, Michelle Shocked and John Hiatt (among others). In addition to all of that, he's released several solo albums.

Jon Dee Graham's new release, Garage Sale, has a great indie acoustic rough sound. Of course it's his wonderfully gruff voice that really drives the tunes and creates the atmosphere. And it's an atmosphere with some positive vibes, with often uplifting lyrics, like "If you need some help, some help to see you through/Then stand next to me, and I'll stand next to you/Well, it could be all right/It can be all right/I will be your brother for tonight" in "The Orphan's Song."

There are obvious comparisons to Tom Waits - not just in his voice, but in his fearless determination to let each song develop in its own natural way, without imposing a structure that wouldn't fit (listen to "Bobby Dunbar," for example; or "Collapse").  Also, the songs on this album feature some great lyrics, creating vivid images, emotions and worlds.

All of the songs on Garage Sale were written by Jon Dee Graham. (By the way, I'm not sure quite what to make of the album's last track, but I dig it.)

Garage Sale opens with "Unafraid," which starts with organ, giving the impression of being in church. And there is a simple, steady drum beat.  Then that great rough voice comes in to deliver a strange sort of personal sermon, with lines like "I've pulled the thorn from the paw of the lion" and "I put myself beyond human aid/I have been placed in a position of neutrality/And now I, I am unafraid."  This song has a wonderful, slow build, as other voices join in.  The song does have a sort of garage feel, as it is delightfully unpolished, like a makeshift church for revealing personal truth.

"Yes Yes" is a strangely sweet tune with a quasi-ethereal quality, like a song half in light, half earthbound. It feels like memories. Here is a taste of the lyrics: "The swimsuit girls, they look away/And everything holds its breath/Yes, yes."  I love the simple, repeated bit on piano.

"Yes Yes" at one point takes me back to my late teens when I'd go see musicians in Harvard Square in Cambridge.

"O Dearest One" is a sweet duet with Erin Ivey. (A different version of "O Dearest One" was included on Jon Dee Graham's 2006 release, Full.)  This song is vocals and acoustic guitar. And the guitar work is mostly simple strumming, nothing showy or ostentatious, but perfectly effective. The focus is on the vocals.

Erin's voice is a wonderful contrast to Graham's - hers is a light, clear, pretty voice. The two together create this wonderfully honest and true feel of a relationship, of real people, real emotions. It begins, "O dearest one/The dark is on us now/The day is done/And far beyond us now/Just this once let's pretend that we won/Let's feel lucky/Dearest one." This is a wonderful song.

"Just Like That" is probably my favorite track on this album, partly because of its strong emotional impact. This song really just got to me, and I can't shake it (not that I necessarily want to). These lyrics are excellent: "It's just a little piece broken off from my memory/A little piece held tenderly/Tenderly and tight/Well, you think you know, but you'd be wrong/How the time will go, and how you blink, it's gone/And when it's gone, it don't come back/Yeah, when it goes, it goes just like that/Like that." This song is beautiful (and yes, sad).

"Perfect moments, they come and go/Like days and weeks and months, you know/Even if you hold on tight."

The song's sole instrumental track, "#19," is a cool tune with a sort of Hawaiian feel and a jazzy vibe. It really dig it. It's a nice little surprise (on an album full of surprises).

CD Track List
Garage Sale is scheduled to be released on July 17, 2012 through Freedom Records.
Posted by Michael Doherty at 2:37 PM