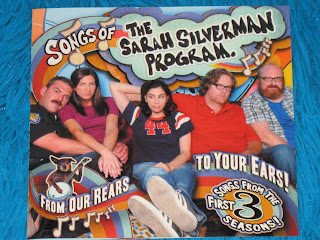 One of my favorite aspects of The Sarah Silverman Program is the songs. The musical numbers lifted the show into an even higher realm of the absurd. Plus, they were damn funny. And, yes, several are about poop, including "Doody Song" and the wonderful "Poop Song" (in which Sarah joyously sings, with her new daughter, "we pooped at the mall today").  Well, they're all collected on the CD Songs Of The Sarah Silverman Program.

This CD contains ninety-nine tracks, and this isn't like that Cracker album where most of them are blank (just so "Eurotrash Girl" could be track #69 - sheesh). But of course not all of them are songs. Many are bits of dialogue from the show. I'm glad the dialogue is on separate tracks from the songs (I can't listen to the Pulp Fiction soundtrack anymore).

The tracks are presented basically in the order of the episodes, except for the "Goodnight" segments, which are all presented together at the end. Those are the funny morals that ended most episodes, with Sarah telling her dog what she learned during the course of the show. Some of these are completely hilarious, especially when Sarah tells her dog, "Good night, Dougie, I hope you die in your sleep tonight. I'm just kidding. But if it had to be one of us, I hope it's you."

Some of my favorite bits of dialogue are on here, like "Auschwitz? You'll be saying Wowschwitz" (on the "You're Gonna Wish The Holocaust Never Happened" track). And probably my favorite excerpt on this CD is "Abortion Speech," and includes this: "About ten years ago I got pregnant and everyone around me wanted me to give up and have the baby. And for about eight and a half months I listened to them."

A few bits, like "Lochness Animation" and "Charge Of The Nerds," don't quite work, because they're primarily visual jokes. But the rest of the excerpts do totally work.

But of course it's the songs that really make the album.  Here are a few of my favorites:

"That's What I Wish" - I love the serious, beautiful feel of this song, juxtaposed with the lyrics about how Sarah wishes she hadn't pooped. The track before this is the lead-in to the song, in which Sarah tries to fart, but poops instead.  By the way, I love the line, "I wish the retarded were re-smarted." This is the song that made even God stand up and take notice.

"Humanitarian Song" - Sarah sings about how she is such a good person for taking in a homeless man. When he starts to sing, she says, "Sshh, this isn't a duet."

"Le Blanc Doodie" - This is a pretty song asking that important question, "Whatever happened to that white dog poop from the seventies?" Remember that?  I do, and I don't know why.

"Believe In Dreams"  -  There are two tracks dedicated to the wonderful children's song "Believe In Dreams" (a song that puts The Little Mermaid to shame).  The second begins with dialogue from the show (one of the only times a song track has dialogue), and then goes into a short refrain of the song.

"Glad You Hurt Your Hand" - This is the dance classic sung by Steve Agee ("I'm glad you hurt you hand/I'm singing in this band/Because you hurt your hand"), with bits from Brian Posehn ("My hand really hurts"). And of course there is the response, "Glad I Hurt My Hand," sung by Brian Posehn. It begins as folk, then goes hardcore.

"Pancakes Please"  -  Hurrah for a fun country hoedown about pancakes!

"Baby Penis In Your Mind" - This is a gorgeous and moving duet sung by Sarah Silverman and Laura Silverman. "The baby penis in your mind/Gives you the courage to be what you need to be."

Posted by Michael Doherty at 3:30 PM