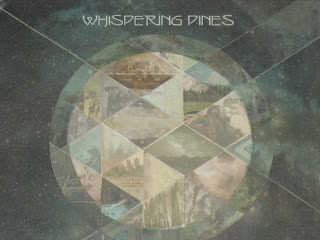 The second album from Los Angeles band Whispering Pines is a self-titled release, featuring all original songs. Of the band's five members, four are songwriters. They tackle a variety of genres, and are pretty successful in each of them. There are elements of country, blues and folk, but the overall feel is one of 1970s rock (listen especially to tracks like "Love Is Free" and "Fine Time"). There are some good vocals, but sometimes it's the instrumental sections that really do it for me. These guys can seriously play. I haven't seen them in concert yet, but if this record is any indication, I'm guessing their live shows are pretty awesome.

And yes, it's surprising to learn this band is based in Los Angeles, as their music seems to come from the heart of the country. Could it be that L.A. is the heart of America after all?

This albums opens with "Move On." Its intro is some great low-down blues. It then kicks in like glorious good ol' rock - just listen to that harmonica. That's when the song really begins for me, with that harmonica. And then the vocals take the song up another notch - and man, I'm sold. Like the best bar band in a roadhouse somewhere you never heard of just blasting away in the night. This is great fun. "Move On" ends with the line, "You know this ain't the first time/I know this ain't the last time."

"Move On" was written by David Burden.

The band slows the pace a bit for "Come & Play," a country tune with an easy groove. Though it's slower, there is nothing timid or too tame here. And the song is not totally country. I really dig the instrumental section that begins with great simple lines from bass and drums, with a bit of organ over them, that then grows into something bigger before returning to that easy goove. It's a really nice section.

It then leads to these lines, "I took you out riding but you weren't impressed with my car/But then I played my family guitar/I knew we were going to go far/When you told me that's fun/When you're done just roll another one and bring it on home."  I really love this song.

"GA Highway" has a folky country-rock feel which I love. It's a good driving song, and at moments it might remind you of The Band. (The album is dedicated to Levon Helm, who died in April.) This is one of my favorite tracks, and it features nice work on guitar. Here is a taste of the lyrics: "Not sure where this road's gonna take me/I'm just looking for a place to settle down/See the foothills glowing in the distance/It's getting harder to make the lines out on the ground/And the rain is the only sound."

"Sunrise To Sunset" is a nice positive country rock tune about music and traveling. It has a sweet vibe, with lines like "We've been on the outside/We've been through the best of times/It's just the beginning of our time to shine."  "Sunrise To Sunset" was written by Brian Filosa and Joe Bourdet.

Oh yeah, "Fine Time" is some pure rock and roll. This is the one that sounds the most like '70s rock and roll.  I've never been to a wet T-shirt contest, but if I ever hold one, I'll make sure this song is playing. "We're going to have a fine time."  And again that instrumental section toward the end is one of my favorite parts, mostly as I love that harmonica.

Whispering Pines is scheduled to be released on September 18, 2012.

Posted by Michael Doherty at 4:53 PM