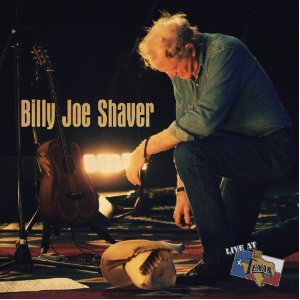 Billy Joe Shaver is releasing a new 2-disc live album (the second disc is a DVD of the performance). The songs are often in the honky tonk country rock vein, but the album also features some tunes closer to folk, and those are my favorites.  Particularly "Live Forever," "Old Five And Dimers" and "I Couldn't Be Me Without You."  I also really like "Old Chunk Of Coal," about a chunk of coal that aims to be a diamond some day. It's got a great feel about it.  I could, however, do without the overt, direct religious references in other songs.

This album was recorded at Billy Bob's Texas on September 17, 2011. All the songs are originals. Billy Joe Shaver throws in a good dose of humor; like in "Honky Tonk Heroes," there are the lines, "There's one in every crowd/For crying out loud, why was it always turning out to be me?" Some of the humor is less effective, like in "That's What She Said Last Night" (one of my least favorite tunes from this collection).  And how serious is he during "Good Old USA" when he says the United States is the best place on Earth and so on? He seems serious.

He plays songs from throughout his long career.  The DVD has the same songs (except the two bonus tracks), but includes song introductions not on the CD, as well as short bits of interviews with Willie Nelson and Pat Green, sprinkled throughout the disc.  Also, you can tell on the DVD that either the order of the songs has been changed, or that tunes have been cut from this release. Because after "Old Chunk Of Coal," Billy Joe Shaver picks up his guitar. But then after we come back from Pat Green's interview, he doesn't have it.

Billy Joe Shaver opens the show with "Heart Of Texas," which is basically a fun song, though there is only so much I can take of that Texas pride stuff (lines like "I'm proud to say the Lone Star state's where I'm coming from" don't do much for me). And there are some of the dumb country trappings, shouts of "yee haw" and the line "Remember the Alamo" (the audience cheers that line).

But he makes up for that with some good lyrics. I particularly like the verse about an old girlfriend, when he sings, "And when my sweetheart listened to the songs I played/She said, I love you honey, but there ain't much money in a serenade/I need a man with a real job/Now she's back here where I left her/God knows I still think about her now and then." That section leads into a nice lead guitar bit.   The song has good energy, and I was surprised to see on the DVD that the audience is seated.

"Georgia On A Fast Train"

More fun is the album's second track, "Georgia On A Fast Train," a tune from his 1973 debut, Old Five And Dimers Like Me. (On that album the song is called "I Been To Georgia On A Fast Train" - for some reason, some of the song titles have been shortened on the track list for this new release). I assume he's poking fun at the dumb redneck stereotype with the lines, "Had a good Christian raisin'/And an eighth grade education." It reminds me a bit of Merle Haggard.

One of my favorites is "Wacko From Waco," a new tune co-written by Willie Nelson. This is a silly tune with a good mean groove. And of course as it's about Waco, someone is going to get hurt, and it doesn't take long. The song opens, "I'm a wacko from Waco/Ain't no doubt about it/Shot a man there in the head/But can't talk much about it."  And then, "Living down in Waco made a wacko out of me."  The thing is, this song is about an actual incident from the spring of 2007, when Billy Joe Shaver was arrested for shooting a man outside a tavern. On the one hand, it's great that he's able to poke a bit of fun at his situation. On the other hand, he's a guy who took a gun to a tavern.

On the DVD, he talks about the shooting before the song, about how the guy shot at him twice before he shot back. Is that the truth?  Who knows? There are conflicting reports.

There is another version of "Wacko From Waco" included as a bonus track - a studio version, with some nice work on harmonica, and a bit of fiddle. And that's Willie Nelson on vocals near the end. I actually prefer this version.  By the way, after the closing credits on the DVD, Willie Nelson says a few words about this song.

"Star In My Heart"

"Star In My Heart" is performed a cappella on this album. It's an insanely short rendition. On the DVD Billy Joe Shaver gives a long intro to it, in which he talks about how his son Eddy died of a drug overdose. He also talks about his own earlier drug problem, and says, "I got out of it with the help of the lord Jesus Christ," to which people in the audience cheer.  And the end of the song he says, "I love you, folks. I love you, Eddy."

The absolute best song in this collection is "Live Forever." This is a softer tune, closer to folk. Here is a taste of the lyrics: "You're gonna want to hold me/Just like I always told you/You're gonna miss me when I'm gone/Nobody here will ever find me/But I will always be around/Just like the songs I leave behind me." It's a truly beautiful and sweet song  This song was co-written by his son Eddy Shaver, and was included in the film Crazy Heart. I love this song. The crowd clearly loves this song too.

"Thunderbird" is an excellent tune that keeps reminding me of "In the Year 2525" for some reason. It features some nice work on guitar by Jeremy Lynn Woodall. However, there is an annoyingly protracted ending.  In this one, Billy Joe Shaver sings, "Society is just slavery/And security is killing me/I worked hard for it, but I'd give it all away/If I could go back to yesterday/When the word was Thunderbird."

On the DVD, after this song, Willie Nelson talks about Shaver as a songwriter, and about covering his material.

"I Couldn't Be Me With You"

"I Couldn't Be Me Without You" is closer to folk. I definitely prefer these acoustic tunes. His delivery on this song is so honest, even vulnerable, in lines like "I realize now after all those hard times/And lord knows we've had us a few/Together forever wherever we are/I couldn't be me without you." Unfortunately, it's so short - only a minute and a half. I wish he'd stretch this one out a bit more, instead of stuff like "Hottest Thing In Town" (which is pretty dull and goes on too long).

"The Git Go" is another new tune, co-written by Gary Nicholson. It has a darker, acoustic feel, which I totally dig. I love these lines: "Now high rollers crap out every time/Rolling soldiers' bones like loaded dice/War is the beast that makes every mother cry."  I love the negative, pessimistic (read as realistic) feel, though I could personally do without the religious angle (there's an early verse about Adam and Eve, which is fine because that is obviously just a story that no one takes literally, but then there's a later verse of the crucifixion). I like the verse about politicians, with these lines: "It's the same old lesson they never learn/They're too busy working on their next term/Politicians keep making fools out of you and me/It's been that way since the git go."

Oddly, in the introduction to this song on the DVD he says, "You gotta know that I'm still writing great songs." You rarely hear a songwriter toot his horn like that. There is a second version of this tune included as a bonus track.

"Old Five And Dimers" is another of the best tracks, presented with such wonderful honesty. There is just his vocals and acoustic guitar to begin it (it's one of the rare moments when Billy Joe Shaver plays guitar on this disc). I love the sadness in his voice on this one. The song ends with these lines: "All that I do or say is all I ever will be/Too much ain't enough for old five and dimers like me/Too far, too high and too deep ain't too much to be."

"Old Five And Dimers" is the title track from his first album, released in 1973.

When people say "my lord and savior Jesus Christ," my instinct is to get far away. Billy Joe Shaver says it in his introduction to "You Can't Beat Jesus Christ," a song in which he sings about how he's been saved - "Praise the lord." It's such a turn-off, and it's the final song of the live portion of the album. This is what he wants to leave us with.

Singing about Jesus at the end of your concert is like if a pitcher came out in the ninth inning and tried to sell you a used car or a set of knives. You'd be like, What happened to the game?  It's a shame, because as I said, there are some fantastic songs on here, but you're left with the image of a religious nut (and don't forget, he also has a gun).

It's weird, but if you put any other name after the phrase "my lord and savior" people would think you were nuts. My lord and savior Melanie Zabrinski. I encourage singers to try this.

The musicians on this CD include Billy Joe Shaver on vocals and guitar, Jeremy Lynn Woodall on guitar and vocals, Matt Davis on bass, and Jason McKenzie on drums.

Live At Billy Bob's Texas is scheduled to be released on July 17, 2012 through Smith Music Group.

Posted by Michael Doherty at 12:37 PM