Friends, life is fine. Paul Kelly says so, and I believe him. At least, it’s fine while listening to some great music. Music really has a magical way of putting things into a brighter, more positive perspective. Paul Kelly & Charlie Owen put on a wonderful concert last night at The Hotel Café in Los Angeles, with a little help from Paul’s daughters, Memphis and Madeleine. The show was sold out, and the audience was definitely into the music. Crowds at The Hotel Café are not always the most attentive, but last night’s audience was there to listen and enjoy the music, and these folks were respectful. The music put me in a ridiculously good and positive mood, and it seemed to do the same for the others present.

After a seriously good opening set by Cat Clyde (I should pick up her CD at some point), Paul Kelly took the stage at 7:47 p.m., opening with one of Shakespeare’s sonnets, Sonnet 30. Paul Kelly released a Shakespeare-themed album last year titled Seven Sonnets & A Song, which combines my two biggest passions in life: Shakespeare and music (okay, the Red Sox are up there too, a close third). Interestingly, Sonnet 30 is not included on that disc, but it’s certainly a good one. Here is its closing couplet: “But if the while I think on thee, dear friend,/All losses are restor’d, and sorrows end” (though Paul delivered it as “All losses are restor’d, all sorrows end”). He performed it a cappella. Then Charlie Owen joined him on keys for “Hard Times,” the lead-off track from their CD Death’s Dateless Night, which was also released last year. Toward the end of the song, Paul played harmonica.

Memphis and Madeleine Kelly then joined them on stage, Paul mentioning it was their first time performing in Los Angeles. He then talked about his two 2016 releases, indicating that the focus of the first half of the concert would be music from those two CDs. He said they would also do “some older songs that we think fit the mood of the night.” They then did Townes Van Zandt’s “To Live Is To Fly,” which follows “Hard Times” on Death’s Dateless Night. Memphis sang backing vocals. Madeleine played keys on this song, as well as providing backing vocals, while Charlie switched to dobro. I love this song, and they did an excellent, moving rendition of it at this show.

Charlie switched back to keys for “Pretty Bird Tree,” also from Death’s Dateless Night. Interestingly, they basically played the songs in the order they’re in on the album (though didn’t do every song from it). Paul played electric guitar on this one, and Memphis and Maddy provided backing vocals. In introducing “Pallet On The Floor,” Paul said: “Some people say it was written by W.C. Handy, father of the blues. It’s ‘Pallet On The Floor.’ But I think it goes farther back than him.” He also mentioned it was one of the first songs he learned to pick on the guitar, joking “I’m still learning how to pick it.” And there is certainly humor to this song, as he sings, “Make it soft, make it low/I swear he’ll never know/When your good man comes, I swear he’ll never know.” The audience appreciatively applauded Charlie’s work on dobro.

Paul introduced “Nukkanya” by saying, “This next song I wrote my very own self.” It’s a song that was originally on his Wanted Man album, as well as on Death’s Dateless Night. Memphis and Maddy sang backup, but it was on the next song, Cole Porter’s “Don’t Fence Me In,” that they really had a chance to shine, and their wonderful voices helped make this tune one of the set’s highlights. My favorite songwriter is Leonard Cohen, and Paul Kelly and Charlie Owen covered “Bird On The Wire” on the CD, and performed it last night. In introducing it, Paul said: “I had the honor and the pleasure of working with this gentleman, the gentleman who wrote it, a few years back, and what a gentleman he was. He says, ‘There’s a crack in everything, that’s how the light gets in.’” I had the great pleasure of meeting Leonard Cohen once, and I too found him to be a gentleman. I was struck by how kind and courteous he was. Anyway, Paul Kelly and Charlie Owen did a great job with “Bird On The Wire” last night, Charlie on keys. They followed that with “Let It Be,” featuring more wonderful work by Paul’s daughters on backing vocals. Charlie’s synthesizer sometimes was a bit overpowering, but it was otherwise a good rendition.

Paul Kelly and Charlie Owen then switched from Death’s Dateless Night to Seven Sonnets & A Song, performing three sonnets in a row, beginning with Sonnet 60. In this rendition, he sang the sonnet twice, the second time through with Madeleine echoing him. It was a compelling interpretation. They followed that with Sonnet 73, with Memphis providing backing vocals. This one has a much happier and brighter sound. They then did Sonnet 18, which is probably the most famous of all the sonnets. It’s like Shakespeare’s hit single. You know it; it’s the one that begins, “Shall I compare thee to a summer’s day?/Thou art more lovely and more temperate.” Paul sang it twice through, jokingly referring to Herman’s Hermits, “Second verse, same as the first.”

They then dipped into some of Paul Kelly’s older material. The moment he began “To Her Door,” the audience went wild, and sang along. Charlie delivered some really nice work on dobro. Charlie switched to keys for “The Pretty Place,” and at one point was cracking me up, playing a single note then lifting his hands as if to say, “There.” Paul played harmonica on this one. They followed that with “Deeper Water,” another of his well-known songs. One of my favorite Paul Kelly albums is 2012’s Spring And Fall, and last night they did one of that album’s best tracks (maybe the very best, actually), “Time And Tide.” On the album, Vika and Linda Bull provide backing vocals. Last night Paul’s daughters did a wonderful job with it. Then, in introducing “Careless,” Paul said it was now “one of my favorite parts of the night – potato and avocado time.” And his daughters held up shakers that looked like a potato and an avocado. This was another that the audience recognized immediately. It’s on his Greatest Hits: Songs From The South Volumes 1 & 2.

They then played a new song, “Life Is Fine,” which Paul told the crowd was based on the Langston Hughes poem. As he had set some of Shakespeare’s sonnets to music, here Paul Kelly set a Langston Hughes poem to music. “Life is fine! Fine as wine! Life is fine!” Indeed it is. At least it certainly seemed so while I was at this show. And they followed that with two audience favorites, “How To Make Gravy” and “Dumb Things.” "In the middle of a dream/I lost my shirt, I pawned my rings/I've done all the dumb things." They then wrapped up the set with “Meet Me In The Middle Of The Air,” a song that was included on both Foggy Highway and Death’s Dateless Night.

Paul Kelly came back on stage to begin the encore by himself, playing “Little Aches And Pains” without Charlie or his daughters. “Little Aches And Pains” is from the beautiful Spring And Fall. Charlie, Memphis and Madeleine then returned for “Cities Of Texas” and “From Little Things Big Things Grow.” I love “From Little Things Big Things Grow,” and from the audience’s reaction, it seems I am far from alone. A lot of the crowd sang along, and cheered certain lines at the end. “How power and privilege cannot move a people/Who know where they stand and stand in the law.” The show ended at 9:23 p.m.

And here is a shot from Cat Clyde’s set: 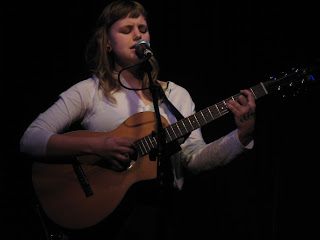 The Hotel Café is located at 1623 N. Cahuenga Blvd. in Los Angeles.
Posted by Michael Doherty at 11:50 AM