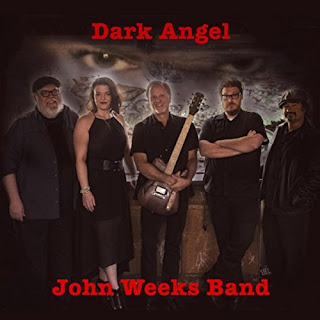 John Weeks Band, based in Denver, delivers some good blues on Dark Angel, the band’s second release, which follows the 2014 self-titled debut. The album features all original material, written by John Weeks, Stacey Turpenoff and Danny Haynes, and these songs feature both male and female lead vocals. The band is made up of John Weeks on guitar and vocals, Stacey Turpenoff on vocals, Danny Haynes on keyboards and vocals, Stephen Whitfield on bass, and Robert Fiorino on drums and percussion.

This album grabbed my attention with its very first line, which is, “I’ve got a body in the back seat, I’m going to move it on down the road.” And the way Stacey delivers this line, kind of matter-of-factly, makes me believe her. Don’t get me wrong – she belts out certain lines in this song, including the very next line, and hell, that makes me believe her all the more. She’s a bit unhinged, this one, and might be calm one moment, and then scratching at the ceiling the next. Makes for an interesting song, I can tell you. And besides, this character may have a very good reason for doing what she’s done. The electric guitar matches that sort of energy, screaming at a certain point toward the end. There are several other lines that stand out, like “I’m driving with the top down, but I guess you can’t feel it anymore” and “Your face and my frying pan sure make a mighty fine snack.” “The Hole” was written by Stacey Turpenoff and John Weeks.

Then the second song, “The Blues Just Got More Blue,” starts with some cool, relaxed playing on piano, and Stacey’s voice is more controlled, more beautiful at the start. Of course, the energy in her voice builds from there, in volume and power, but she is starting from a very different place. And perhaps it was because of that very difference, but it was during this song that I became more interested in this album. “I never thought you’d go/And leave me so alone/But now suddenly/Since you’ve gone, it’s just me/We had so much to do/But you left too soon/The blues just got more blue.” And I like the part with the backing vocals toward the end. This is a wonderful bluesy number, and ended up being one of my favorite tracks on this album, in part because of Danny Haynes’ work on keys. Danny Haynes wrote this one. It’s followed by another that Haynes composed, “Closer To Home,” the first song of the disc to feature male lead vocals. This one has a fun, somewhat relaxed vibe, and some more nice work on keys. “Sometimes I even have no regret.”

“How Can You Love Me?” is so bloody cool right from the start. I love that bass, as well as that great work on keys, setting the stage perfectly for Stacey Turpenoff’s entrance more than a minute into the song. Her vocal delivery is so sexy. “How can you love me/When you don’t like anything that I do or that I say.” A valid question. This is another personal favorite, in large part because of Stacey’s powerful and moving vocal performance. “My friends, they don’t come over anymore/Because they all think that I’ve lost my mind.” Also, there is a great lead part on guitar in the second half of the song. And I like that this song is in no hurry. “How Can You Love Me?” was written by John Weeks. A different version of the song was included on the first John Weeks Band CD.

A song that has really grown on me is “Impossible,” written by Stacey Turpenoff and John Weeks. It has a bittersweet feel. Here is a taste of the lyrics: “And the world seems so impossible/We’re cutting time in half/We’re bringing your love back/I don’t see things your way/You don’t see things my way/Everything is so impossible.” It’s followed by “What Does It Take?” which has a peppy, fun vibe. It’s a bit goofy, a bit silly, but totally enjoyable. It was written by Danny Haynes, as was “The One,” another of the disc’s highlight. This one is interesting from the beginning, with a kind of urgent feel to the work on keys at the song’s start. Things settle down a bit when Stacey’s vocals come in. And check out these lyrics: “I’ve been trying to express myself/But each time I try, I become someone else/I’m not the one who goes to work/I’m not the one who comes home/Sometimes I’m not even the one who sits alone.” The album then concludes with its title track, “Dark Angel,” a cool blues tune written by John Weeks and featuring another really good vocal performance by Stacey Turpenoff. “Stop trying to take me back, you know that I can’t go there anymore/You make me feel so good, I just can’t let you through the door.”