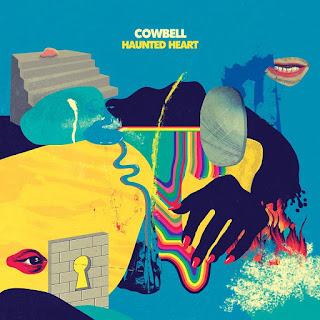 Cowbell is the London-based duo of Jack Sandham and Wednesday Lyle. On their new album, Haunted Heart, they deliver some fantastic tunes, mixing rock and roll and rockabilly and soul, garage and 1960s sounds. Though there is a classic feel to some of these tracks, the songs here are all originals, written by Sandham and Lyle. Jack Sandham plays guitar and keys, and Wednesday Lyle is on drums and percussion. Both provide vocals. They have several guest musicians joining them on various tracks. This is the group’s third full-length CD.

The album opens with its title track, “Haunted Heart,” which eases in, then suddenly takes on a great rockabilly rhythm, and we are on our way. “You feel him standing there/But he’s gone/And it’s been so long/And now you know/It was a lie/He said girl, I’m gonna love you until the day that I die/You’ve got a haunted heart/Until death do us part/Girl, you’ve got a haunted heart.” There is some delicious work on guitar on this track. And Simon Trought joins the duo on autoharp. There are also some wonderful backing vocals by Amie Tridgell, Ali Murphy, Reid Morrison, Sam Ford, Mitzi Trought, Bruna Magor and Pablo Millan, adding to the fun of this song. That’s followed by “None Of Your Business,” a tune to get you on your feet. Yes, as the news from Washington, D.C. gets weirder, and while we wait in hope that Robert Mueller will help bring an end to the horror, this music should keep us relatively sane. That work on keys has a cool 1960s feel. Richard Coulson is on keys on this track. Pour yourself a drink and turn your home into a club, even if you’re alone. Close your eyes, spin around, and imagine the world is better than it is.

They crank up the energy on “Downlow,” with Wednesday Lyle on lead vocals. This is one of my favorite tracks. Don’t you love songs you can dance angrily to? The fuck-you dance is one I’ve turned to often since my early childhood, and, boy, these days it’s needed on a daily basis. “You’d better have eyes in the back of your head/Keep one eye open when you sleep in your bed/Don’t drag your heels, you’d better disappear/Never come back, nothing for you here.” And yes, I want to shout those last two lines to Donald Trump as he ventures forth on his first overseas trip. That’s followed by “Doom Train,” a fun, loose number with a great rhythm.

Cowbell dips into blues with “Neon Blue.” Man, everyone I know has a serious case of the blues these days. I love the blending of their voices on “Didn’t want to lie, didn’t want to lie to you.” This song has a delicious vibe and features some great work on guitar. That’s followed by another of my personal favorites, “Something’s Gotta Give.” “You don’t want to give up/But enough is enough/Something’s gotta give/Yes, it has/Something’s gotta give.” Oh yes, I’ve been saying this for months. Of course, this song is not about the current political state of the United States, but about deciding what to do in a troubled relationship (so, okay, it could very well be about our situation here in the states). And it features some good work on horn by Chuchi Malapersona. Sam Beer joins Cowbell on guitar for this song.

Things then get rocking again with “Nothing But Trouble,” with a 1960s sound. “She’ll break your heart, she’ll take your soul/You might never recover.” That’s followed by “What Am I Supposed To Do?” This is a good rock song about being a total fucking mess and not knowing what to do about it. “Ain’t the man that I used to be/I’m a shadow of what I was before/Look in the mirror and what I see/It don’t look like me no more.” And I love these lines: “I’ve got a bit part in my life/My baby’s playing the lead.” Richard Coulson provides more wonderful work on keys on this track, and I love the backing vocals, “Room service, woo, room service.”  The fun continues with “New Kinda Love,” which has kind of a 1960s loose vibe and is another of this CD’s highlights. Wednesday Lyle is on lead vocals. “When I look into my baby’s eyes/I get a feeling I don’t recognize/I’m sure/I never had it before.” Richard Coulson is on keys on this track too.  “It feels so good/Yeah, it feels so good.” As does this song.

“Stop Breaking Your Own Heart” has a garage rock sound, with a 1960s flavor, particularly in the chorus. The CD then concludes with “No Wrong,” a mellower, soulful number featuring a really good vocal performance by Jack Sandham. Joining Cowbell on this track are Richard Coulson on keys, Chuchi Malapersona on horn, Sam Beer on organ, and Reid Morrison on backing vocals. “When it feels like nobody’s on your side/Feels like nobody is true/I’ll find you no matter where you hide/Yes, I’ll come running, running, running, running to you.”

CD Track List
Haunted Heart is scheduled to be released on June 2, 2017 on Damaged Goods Records.
Posted by Michael Doherty at 3:50 PM