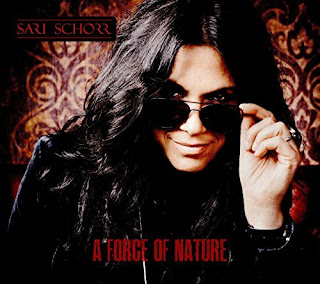 I love loud, ballsy female blues singers, and Sari Schorr sounds like she could tear giant holes in the surface of the Earth with her voice, shake the towers, rattle the bones of those who might foolishly stand in her way. Her debut full-length CD is titled A Force Of Nature, and it is an apt title. Don’t try to control her, don’t try to coax her to aid your business, just stand by and admire the power. Most of the tracks here are originals, written or co-written by Sari Schorr, and the few covers she does on this disc have been given an unusual spin, Sari certainly adding her own touch to those familiar songs. She is joined by Innes Sibun on guitar, Oli Brown on guitar, Quique Bonal on guitar, Julian Maeso on keys, Jesus Lavillas on keys, John Baggot on organ, Nani Conde on bass, Jose Mena on drums, and Mike Vernon on percussion.

She opens the album with a song tackling one of those perennial blues subjects, being broke. In “Ain’t Got No Money,” she sings, “Well, I ain’t got no money/But I still got bills to pay.” We’ve all been there, eh? But this song isn’t simply about needing money. It takes the whole idea of money and all that surrounds it into consideration here. The lines that stand out for me are, “You’ve got everything you’ll ever need/You’re a slave to your greed.” It’s a good song, but it’s the following track, “Aunt Hazel,” that really got me interested in this CD. After a 1970s-like rock intro (with guitar and cowbell), it comes on strong, like an angry ball of fire hurtling toward you, impossible to ignore. The first time I put on the CD, this is the song that made me put away what I was doing and focus entirely on the music. It was demanded of me, you understand. Listen to her rip as she sings, “Just one hit to clear my mind/I’ll pay the rent another time/I’m in trouble, I’m in trouble again.” And this tune just builds from there.

If there is one thing that blues music knows all about, it is relationships that are just no damn good for us, relationships we may crave, relationships we may enjoy on some level, but which ultimately destroy us if we don’t get untangled from them relatively quickly. In “Damn The Reason,” Sari sings, “Gonna leave you as soon as I can/If I break your heart, take it like a man/I’ll pretend I never knew your touch/I don’t want to see myself in your eyes/I don’t want to see myself in your eyes.” And then in the somewhat funky “Cat And Mouse,” she tells us, “I ain’t looking for nobody who’s gonna sell me another lie.” Ah, then it’s best to avoid Washington, D.C. Dishonesty has basically become patriotic.

The first cover of the album is Lead Belly’s “Black Betty,” and it is an interesting rendition (quite a bit different from that famous Ram Jam version), starting as from a distance, like Sari is gathering her forces, getting ready to attack,  and soon the song bursts forth, but is still a bit slow. She is in no rush, she’ll take her time ripping into your heart and guts, removing them to feed her wolves. Ah yes, this is wonderful. This version then returns to the opening, like, perhaps sated, she is returning to her lair in the distance. That’s followed by another of the album’s covers, Walter Trout’s “Work No More.” Of the disc’s three covers, this is the one that remains closest to feel of the original, and that is likely due in no small part to Walter Trout playing lead guitar on it. Dave Keyes plays piano on this track. The final of the album’s covers is an unusual rendition of The Supremes’ “Stop! In The Name Of Love.” It is interesting in its approach, taking a familiar hit and giving it a great, raw blues energy. I didn’t even recognize it at first, except by the lyrics, but I ended up really enjoying it. Rietta Austin provides backing vocals on this track.

“Demolition Man” is a fun powerhouse of blues grooves and feeling. “You’ll never quit your sinning ways/You’re just the man I need.” Oh yes, this is a blues love song (well, maybe not love, but certainly lust), with lines like, “My heart is beating strongly/But you know my flesh is weak.” I also really like “Letting Go,” despite its use of the cliché image “the sea of my tears.” I love the feel, the groove of this one. There is something of an early ‘60s pop song happening here, but dripping in blues. The results are gorgeous. And check out these lines: “Let me go, let me go/I can’t bear my heavy soul/Only shadows have open arms for me.” This is an excellent song. At the end of this album, Sari Schorr takes off her boxing gloves to deliver a mellow, though passionate song of thanks, of gratitude at the end of a life, titled “Ordinary Life.”

CD Track List
A Force Of Nature was released on September 16, 2016 on Manhaton Records.
Posted by Michael Doherty at 8:24 PM