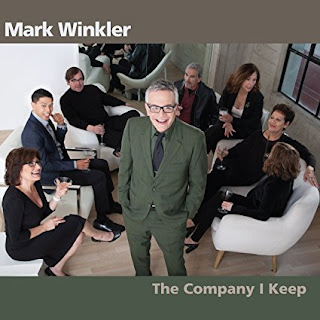 Lyricist and vocalist Mark Winkler’s new album, The Company I Keep, includes some interesting choices of covers as well as lots of good original material. And the company Mark Winkler chooses to keep on this CD includes some excellent musicians and vocalists, many of whom worked with him on his 2015 release Jazz And Other Four Letter Words, the album that turned me on to this artist. Several of these songs are delivered as duets, Winkler accompanied on vocals by folks like Jackie Ryan, Cheryl Bentyne, Steve Tyrell, Claire Martin and Sara Gazarek. The musicians backing him on this release include Jamieson Trotter on piano, Rich Eames on piano, Eric Reed on piano, Josh Nelson on piano, John Beasley on piano, David Benoit on piano, Larry Koonse on guitar, Bob Mann on guitar, Lyman Medeiros on bass, John Clayton on bass, Mike Shapiro on drums, Jeff Hamilton on drums, Kevin Winard on drums, Bob Sheppard on saxophone and clarinet, Don Shelton on clarinet, Bob McChesney on trombone, Ron Blake on trumpet, Brian Swartz on trumpet, and Paul Cartwright on violin. The music on this disc is largely positive and uplifting, which of course is something we all need these days, regardless of our personal set of circumstances. The whole world needs a lift. The whole world needs a reminder of what is really important.

The album opens with a cover of Donald Fagen’s “Walk Between Raindrops” (here written as “Walk Between The Raindrops”). I absolutely love the wonderful work on bass by Lyman Medeiros that begins this rendition. This song is presented as a duet with Jackie Ryan, and their vocals are a reason why I prefer this version to the original. And then the horns sound like they’re about to sweep us off our feet and transport us to a magical land where leaders tell the truth and hatred is a rare emotion. The horn section is made up of Bob McChesney, Ron Blake, Brian Swartz and Bob Sheppard. I’ve never been a Steely Dan fan (though I love the band’s name), but I really dig this song, which was included on Fagen’s first solo album, 1982’s The Nightfly (it was also covered by Mel Tormé). Mark Winkler includes a little nod to “Singing In The Rain” at the end of this rendition. He follows that with a Prince cover, “Strollin’” (from Prince’s 1991 album Diamonds And Pearls). This one is also presented as a duet, this time with Cheryl Bentyne (of The Manhattan Transfer), who sang on a couple of tracks on Jazz And Other Four Letter Words. This is a delicious tune (sometimes I forget just how many excellent songs Prince is responsible for). “Let’s forget about the time/Let’s relax and ease and our mind/We deserve to just feel fine.” Oddly, Mark Winkler changes the line from “Buy some dirty magazine” to “Buy some arty magazine.” Halfway through, there is a great instrumental section featuring piano and bass and percussion.

“Midnight In Paris” is a delightful tune, and yes, it seems to take its inspiration from the Woody Allen film, mentioning those folks from the 1920s – F. Scott Fitzgerald, Ernest Hemingway, Pablo Picasso, Cole Porter, Gertrude Stein, Man Ray and so on. Mark Winkler and Phil Swann wrote the lyrics, and Bill Cantos wrote the music. This track features good work on clarinet by Don Shelton, and some pretty work on violin by Paul Cartwright. I particularly love the moments when they engage each other. “What is old is strangely new again/When I’m with you again.” That’s followed by “But It Still Ain’t So,” another of the disc’s highlights, written by Louis Durra and Mark Winkler, and performed as a duet with Steve Tyrell. I love Bob Sheppard’s bright work on saxophone.

I’ve said it before, and I’m sure I’ll say it again, but you can’t go wrong with Gershwin. On Jazz And Other Four Letter Words, Mark Winkler covered “Nice Work If You Can Get It,” and on this album he does “They Can’t Take That Away From Me.” This rendition features some good work on bass by Lyman Medeiros. “Love Comes Quietly” is a tender, sweet, late-night love song with some very positive, yet honest lyrics. “You and I are captured in its spell/Like in a fairytale, we only know too well/There are no ringing bells or violins/When loves come in.” It was written by Mike Mish and Mark Winkler, and features a good bass lead by John Clayton.

“Rainproof” is done as a duet with Sara Gazarek. It has a sweet and playful tone. “We’re not rainproof, but we’re stronger than the rain.” I love Bob Sheppard’s work on saxophone. “Rainproof” was written by Angela Parrish and Mark Winkler. Mark Winkler delivers a wonderful cover of “Lucky To Be Me,” a song written by Leonard Bernstein, Betty Comden and Adolf Greene for the musical On The Town. I love the moment when the clarinet comes in, and the song takes on a happier tone. This song should put a smile on your face, and we can all use a reason to smile these days, right? The album then concludes with a gentle, heartfelt and positive song titled “Here’s To Life,” written by Artie Butler and Phyllis Molinary, and most famously done by Shirley Horn. On this recording, Mark Winkler is accompanied only by Rich Eames on piano. “No complaints and no regrets/I still believe in chasing dreams and placing bets/And I have learned that all you give is all you get/So give it all you’ve got.”

CD Track List
The Company I Keep is scheduled to be released on May 25, 2017.
Posted by Michael Doherty at 7:31 PM