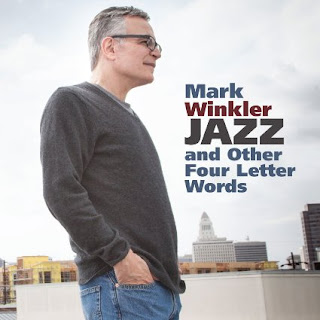 You might be familiar with Mark Winkler as a co-writer for the musical Naked Boys Singing! (which was also made into a film) and Too Old For The Chorus ... But Not Too Old To Be A Star!, as well as for Play It Cool. He’s also a well-known lyricist, having written many songs recorded by other artists. And of course he’s released many albums of his own. Jazz And Other Four Letter Words, the new CD from this talented jazz vocalist and lyricist, includes a mix of original material and some nice choices of covers. There are two duets with Manhattan Transfer’s Cheryl Bentyne, whom Winkler teamed up with on the 2013 release West Coast Cool.

Jazz And Other Four Letter Words opens with “My Idea Of A Good Time,” a song Mark Winkler wrote with Greg Gordon Smith. The first lines of this one are: “Some say that I dream too much/My head up in the clouds/I’m out of touch.” Ah, we’ve all been told that at one point or another, right? I know I have. And I like any jazz song that makes reference to King Kong (“And the world’s in my palm”). I also dig these lines: “Yes, fleeing from the scene of a perfect crime/I guess that’s my idea of a good time.” In addition to these good lyrics, there is a nice lead on piano by Jamieson Trotter.

Mark Winkler follows that one with a humorous tune titled “I’m Hip,” written by Dave Frishberg and Bob Dorough in 1965 (by the way, Dave Frishberg also wrote the lyrics for “I’m Just A Bill,” for you Schoolhouse Rock fans). This is the first of the two duets with Cheryl Bentyne. I love the way they sing together on phrases like “my shades on.” I also love the way the song sort of pauses for a moment when she says she’s into Zen, as if the song itself is meditating. This track has quite a few nice little touches like that. Plus, it has a cool bass solo by John Clayton. This is one of my personal favorites. The other duet with Cheryl Bentyne is Rodgers and Hart’s “I Wish I Were In Love Again,” from the 1937 musical Babes In Arms. The lines that always amuse me in this song are “The conversation with the flying plates/I wish I were in love again.”

You can really never go wrong with Gershwin, and on this release Mark Winkler does a nice, slow rendition of “Nice Work If You Can Get It” – just vocals, piano and guitar, giving it a groovy, mellow feel. There is a good lead spot on guitar by Pat Kelley halfway through. Mark also does a Paul Simon cover, “Have A Good Time.” I really dig how the bass dominates the beginning of this track, and then there is a delightful surprise when the pace suddenly picks up. Check out that lead on trombone by Bob McChesney. And Walt Fowler is on trumpet.

This album includes two songs with music by Bill Cantos. The first, “Your Cat Plays Piano,” has a piano part that at times reminds me of Dave Brubeck’s “Take Five.”  This cool tune has some funny lines, like “And I could swear he’s a jazzer, because he will not play the melody” and “And though I can’t say what your poetry’s about, I know it’s very deep.” There is a spoken word section, delivered over some cool work on bass and drums. The second song with music by Bill Cantos is “I Chose The Moon,” a sweet, romantic song that is going to make you want to reach out to embrace your loved one (one verse reminds me of when I met my girlfriend).

Mark Winkler co-wrote the album’s title track, “Jazz And Other Four Letter Words” with Jamieson Trotter. This song takes a kind of humorous (and loving) look at the current state of jazz, from the perspective of a musician. “Today you dare not use the word/It’s like something bad, they say/It’s not commercial, man/But they don’t understand.” And it refers to some of the most famous jazz musicians – “Bird, Monk, Chet, Prez” (whose names, or nicknames, coincidentally have four letters).

This CD concludes with “Stay Hip,” which Mark co-wrote with Rich Eames, who also arranged the track and plays piano on it. It's a love letter to jazz and its fans. “Stay true, stay young, stay hip.” This song features a cool guitar lead by Larry Koonse.

CD Track List
Jazz And Other Four Letter Words is scheduled to be released on August 1, 2015 on Café Pacific Records (though Amazon has the release date as July 21, 2015).
Posted by Michael Doherty at 10:29 PM