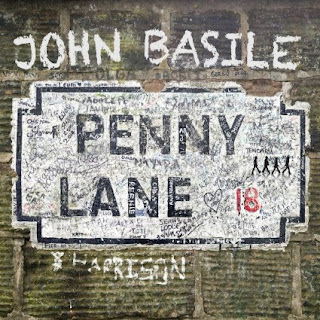 Every once in a while I meet someone who claims not to be a Beatles fan, and I immediately stab that person in the chest because obviously he’s a member of an alien race bent on the destruction of humanity, and I just don’t stand for that kind of thing, you understand. There have been an incredible amount of Beatles covers done over the years, and for good reason: those guys wrote quite a few phenomenal songs. Beatles tunes have been done in just about every musical style you can think of, and that of course includes a lot of jazz covers. Jazz guitarist John Basile’s new CD, Penny Lane, dedicates itself entirely to Beatles material. This album has lots of mellow vibes, often with a bit of a Latin flavor. It focuses on the band’s middle period (there is nothing from Abbey Road or Let It Be), and the majority of the tracks are Paul McCartney songs. John Basile is the only musician on this album, using midi programing on the guitar to create all the other sounds.

This CD opens with “Eleanor Rigby,” and John Basile goes in some interesting directions with this one, while maintaining the basic structure and heart of the song. The main guitar follows the vocal line, and it’s hard not to sing along with it. John follows that with “The Fool On The Hill,” which here is titled “A Fool On The Hill” for some reason, and then “Penny Lane.” It’s with “Penny Lane” that this CD begins to get really interesting. There is some wonderful and joyous guitar playing on this track. It kind of carries you along, with uplifting vibes. I actually wish it were a little longer, because as it fades out it seems to be going in a different direction. He also finds some interesting places to take the largely mellow “And I Love Her,” especially in the middle of the track.

The only song that John Basile covers from Sgt. Pepper’s Lonely Hearts Club Band is “A Day In The Life,” and oddly this jazz cover is shorter than The Beatles’ original version. It has quite a different feel from the original, sounding brighter, which I’m not sure works. And it’s lacking that incredible build and final note from the original. But there is some great guitar work here. The only song from The White Album covered here is George Harrison’s “While My Guitar Gently Weeps,” on the CD case erroneously attributed to Lennon and McCartney. This is the only Harrison composition on this CD, and here it’s given a Latin rhythm.

John Basile delivers a sweet rendition of “Here, There And Everywhere,” following it with an interesting version of “I Want To Hold Your Hand,” the only early Beatles song on this album. Here John Basile stretches out, more than doubling the length of the original, and gives the song a very different tone and vibe. It’s perhaps the most surprising track on this release, as I wouldn’t have guessed this would be the song that would get the longer treatment. The way “Can’t Buy Me Love” is handled also comes as a surprise. It opens with some funky guitar that catches you off guard at first, and maybe seems a bit misplaced, but as the tune gets going, it begins to work and make sense. Though at times this track feels a bit odd to me, there is some seriously good guitar playing.

Penny Lane concludes with two of my favorite Beatles tunes: “Norwegian Wood (This Bird Has Flown)” (here simply titled “Norwegian Wood”) and “In My Life.” This version of “Norwegian Wood” has a bit of swing to it, which actually works quite well. And this is another track that goes in some interesting territory, with lots of space to move, as it’s more than twice the length of the original. This is one of my personal favorites from this CD. “In My Life” is fairly faithful to the feel and spirit of the original, and is probably the prettiest track on this release. There is a lot of heart and love in the playing, making it quite effective.

CD Track List
Penny Lane is scheduled to be released on August 7, 2015 through StringTime Jazz.
Posted by Michael Doherty at 3:54 PM