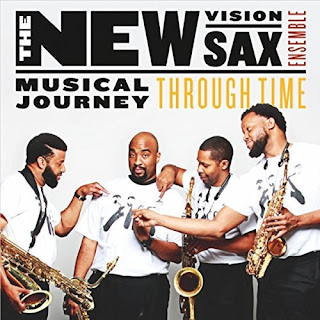 I was certainly curious about The New Vision Sax Ensemble’s release, Musical Journey Through Time. After all, the group is a saxophone quartet, so while most of the material might be familiar – “A Night In Tunisia,” “Round Midnight,” “My Favorite Things,” etc. – the approach was going to be different from other renditions I’ve heard. Of course, as this CD clearly demonstrates, there are a lot of different sounds that can come from the various types of saxophones. Diron Holloway plays soprano, clarinet and alto saxophone; James Lockhart is on alto saxophone; Jason Hainsworth is on tenor saxophone; and Melton R. Mustafa plays baritone sax. And together they create some gorgeous sounds. But what really struck me was the joy of their playing. It’s clear in every note, and it makes this album a delight to listen to. The group is based in Florida.

They kick off the CD with “Conservation,” written by Bobby Watson (who himself was a member of a saxophone quartet, The 29th Street Saxophone Quartet). And what a joyful way to start the album. Seriously, there were at least two moments when I laughed aloud out of sheer joy while listening to this track. This is a playful, delicious rendition. The group follows that with Dizzy Gillespie’s “A Night In Tunisia.” This is a good rendition, and it’s interesting how the different saxophones work together here, with the baritone sax working as the bass. Both Diron Holloway and Jason Hainsworth take leads on this track. But most of my favorites on this disc are the more playful, lighter numbers, like “Won’t You Come Home, Bill Bailey,” which is a total delight. That is followed by a cool rendition of Thelonious Monk’s “‘Round Midnight.”

I’ve said it many times, but you can never go wrong with Gershwin. Oddly, I think the first time I actually heard the name Gershwin was when I was a child watching WKRP In Cincinnati. In one episode, Mrs. Carlson asks Johnny Fever to play some Gershwin. Johnny replies, “On the air?” So I was of course immediately curious as to who this Gershwin person might be. Turns out it was two people, but you know that. (If you’re curious, Johnny Fever plays “Someone To Watch Over Me” in that episode.) Anyway, here The New Vision Sax Ensemble does Bill Holcombe’s arrangement of “Selections From Porgy And Bess,” which begins with a bit of “Catfish Row” and also includes a wonderful, beautiful rendition of “Summertime.” Interestingly, this group also does Bill Holcombe’s arrangement of Scott Joplin’s music for saxophone quartet, titled “Scott Joplin Portrait.” My first taste of Scott Joplin came with a cassette of the soundtrack for The Sting, and touches of much of that music are contained in this track. I was shocked at just how great this track is. Don’t get me wrong, I love Scott Joplin, but I wasn’t thinking a rendition without piano would work quite this well. But these guys do a tremendous job with the material, and this ended up being my favorite track.

It’s funny. I had just been talking with my girlfriend about “My Favorite Things.” She was in the middle of watching The Sound Of Music, a movie I’ve never been able to sit through, and I told her how I just really don’t like much of the music I’ve heard from that film, and picked “My Favorite Things” as a prime example. I just can’t stand that song, but mainly because of the lyrics, which I think are among the worst ever written. I told her the only versions of the song I like are instrumental jazz renditions, and there certainly are plenty of those to choose from. Moments later, I popped in this CD for the first time, and of course it contains yet another rendition of this song. But hey, no lyrics, so it’s enjoyable (though it’s still difficult for me to keep those lines out of my head when listening to an instrumental version).

They follow that with another song from a musical, this time from West Side Story, a film I did manage to get through, but mainly because of my love of Shakespeare. From this musical, they selected “I Feel Pretty,” which is a goofy, playful choice, to be sure. But it’s kind of delightful. These guys are clearly having fun with it, and I found myself smiling while listening to this rendition. They end the album with a moving rendition of “Amazing Grace.” Maybe I’m mad, but at a few moments the saxophones sound very much like bagpipes to me. This track is another of the disc’s highlights.

CD Track List
Musical Journey Through Time is scheduled to be released on June 12, 2017.
Posted by Michael Doherty at 1:53 AM