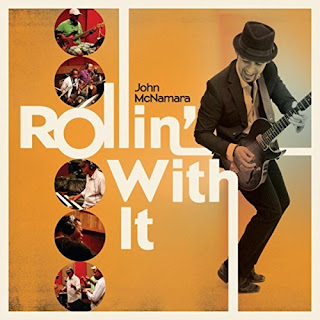 Australian blues artist John McNamara released his debut album in the summer of 2014. A track from that CD, “Burn, Burn, Burn,” won the Australian Blues Music Award for Song of the Year. And now he has a new album out, Rollin’ With It. It was released in Australia on March 1st, and is now getting a wide release. It features mostly original material, written by John McNamara, but also a few really good covers. I love the combination of soul and blues, and his voice has just the right sound, the right quality, to make it real and true. I saw a promotional video that he did, and was shocked by how young he looks. Must have an old soul, as they say, because that voice is coming from some deep experience. Though John McNamara is from Australia, this album was recorded at Ardent Studios in Memphis, Tennessee, and John is joined by some accomplished and familiar musicians, including Steve Potts on drums, Michael Toles on guitar, James “Jimi” Kinard on bass, Lester Snell on piano and organ (he also co-produced the CD), Marc Franklin on trumpet and flugelhorn, Lannie McMillan on tenor saxophone and Jim Spake on baritone saxophone. Backing vocals are provided by Iseula Hingano and Nicole Nehemia.

He kicks off the album with “One, Two Of A Kind,” a good song with something of a classic soul sound to his vocals, especially on certain lines like “Build it on up just to tear it on down,” while his lead guitar says blues all the way. The horns also help give the song that great Stax feel. “One, Two Of A Kind” is followed by “Bad Reputation,” a fun song with a catchy bass line. It’s a song about leaving his questionable past behind to focus on being a good man to his woman. “That’s all done, that’s all over/I’m all about loving you/Yes, I’m all about loving you.” Do you think by repeating that line he is more convincing? Or is it a case of protesting too much? Ah, let’s give him the benefit of the doubt.

The first time I listened to this album, the song that started getting me really interested was John McNamara’s cover of “Ask Me ‘Bout Nothing (But The Blues”), here titled “Ask Me Nothing (But About The Blues).” It was written by Don Robey and Henry Boozier, and originally recorded by Bobby Bland. John McNamara delivers an excellent rendition, with the perfect amount of ache in his voice. “Ask me why does a tree have to shed its leaves/I don’t know, oh I don’t know/But ask me how does a man feel when he’s got the blues/I’d say, misused, abused, oh, downhearted and blue/The reason that I know this/Is ‘cause the blues is all I was left with.” Everything comes together here to create a powerful and moving version of this song. And it’s followed by another seriously good track, “Wild Out There,” written by John McNamara. I love songs like this that have something of a classic R&B quality, both in the music and the vocal delivery. I love Sam Cooke and Otis Redding, and this song could keep company with the work of those artists. Something about this kind of music always works for me. “And the city ain’t been kind/And I’ve seen a thing or two/I’ve been down so long/Could really use some time with you.” Yes. And yes, it is certainly wild out there. I love John McNamara’s vocal performance here, and of course the horns are excellent. This is one of my favorites.

“Under The Weight Of The Moon” has such a cool vibe right from the start, with those finger snaps and that delicious organ, with that blues guitar adding comments, all before the vocals even come in. “I’m just gonna lie here, baby/You know it feels so good, feels so good.” Yes, it does. And the following lines give the CD its title, “Gonna roll with it, roll with it/I’m gonna roll with it.” This is another of my favorites. It’s followed by another tune with a good groove, “One Impossible Night.”

As I mentioned, songs from this album would feel at home in the company of the work of Sam Cooke and Otis Redding. Well, John McNamara actually covers an Otis Redding tune, “Security,” delivering a good rendition. How can you help but dig that groove, those horns, those excellent vocals? John McNamara follows that with another cover, and actually another song done by Bobby Bland, “Blind Man,” written by Don Robey and Joe Scott. He also ends the CD with a cover, this time a song written by Lloyd Pemberton and Teddy Conyers, “Suffering With The Blues.” This one has been recorded by several artists over the years, including Joe Medlin, Little Willie John, Nancy Wilson, James Brown and Lou Rawls.  On this CD’s version, John McNamara gives us a heartfelt, passionate vocal performance. Listen to that heartache. “Why does your love taunt me/And haunt me through the night/’Cause I know you don’t want me/If you did, you’d be right here by my side.” Come on, lady, go see the guy already!

CD Track List
Rollin’ With It is available now on Bahool Records.
Posted by Michael Doherty at 3:21 PM