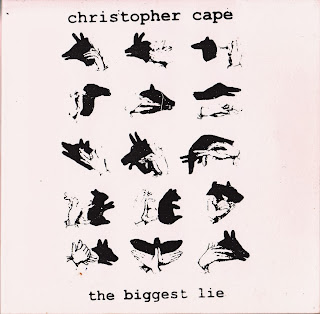 A couple of years ago I was sent a CD by a group called Modern Field Recordings. The album was We Got Ur Back, and it was really unlike anything else I was hearing at the time – a cool mix of folk, pop and punk with a sense of humor. The album had its own peculiar vibe and personality, and I was immediately a fan. The bad news is that band broke up. The good news is Christopher Cape has released a new batch of tunes on his first solo album, The Biggest Lie.

This album is full of thoughtful, acoustic yet powerful songs. All are originals, written by Christopher Cape. This is an excellent album that seems to affect me more each time I listen to it.

The album kicks off with “In Berlin,” a song that he softly counts off at the beginning, in just a whisper. Christopher Cape has an unusual and distinct voice – a voice full of emotion without affectation or effort. In some ways, it’s the voice of an outsider, but an outsider we relate to, or want to relate to. There is something sweet and beautiful about this song. Here is a taste of the lyrics: “Believe in anything you want, and nothing else/Leaving on the next train/You’re too romantic, but I love you all the same.” I also really like this line: “And how you prayed the sunrise would at last bring some relief into this city.” There is a moving instrumental section to conclude this song.

I also really love the instrumental ending to “Stockholm Syndrome,” a song that is oddly delightful. You’ll know what I mean when you hear it.

The rhythm is more at the fore in “Divorcee,” which is an interesting choice, for it seems the beat or rhythm drives the main character of this song, that it’s something beyond her or below her, a strong force in her life. “We are two actors in the very last play/Let’s just forgive and forget the past few days/And I will tell them in the morning that it was an accident.”  Then the beat suddenly stops for the line, “And they’re bored to the bones today/And the hero speaks, and they’re not listening.” The rhythm returns on, “They’re oh so bored to the bones today/And the villain speaks and they’re not listening.”

“Work All Day” is one of my favorites. I love the acoustic guitar part, and the song also does interesting things with percussion. And of course, like all of Christopher Cape’s songs, the vocals and lyrics will grab you. He creates interesting characters in his songs. “You’re a baby in a grown woman’s skin/And at twenty-five you want to start to win/You lose two boys or you lose two men/You’re tired of playing games with all of them/’Cause they don’t feel the same about you as I do.”

“Crash” is another of my favorites. This tune has such a good groove. That bluesy electric guitar hook is wonderful, even comforting in a way. I just love this song. “I wish I was alone/I wish I wasn’t driving you home/On these streets I’ve been down thousands of times/I want to take your hand and not your life.”

“Feel The Same” is an excellent song whose connection between characters feels so true. It’s like they’re united in their uncertainty. When we feel like things are uncertain, or beyond our control, it can be bearable if we’re with someone. In this song, Christopher sings, “Open books to pray and sing hymns/But you’re not sure if anyone’s really listening/I feel the same/And I want to stay.” In another verse he sings, “You understand we’re all in a cage/So how can anyone evoke real change/I feel the same/And I want to stay.” Nice, eh? On top of that, the instrumental sections are beautiful.

“Edmund & Georgia” is a moving love song that gets into you, then bursts open toward the end, and you feel it’s you breaking open. “See you again when we leave this mortal world.”

“Forgiveness” is a pretty acoustic song that in some ways reminds me of some of the best of 1960s folk tunes. Sure, part of that might be the scratchy record effect that’s used partway through the song – which is unnecessary, by the way. It begins, “Thief in the night, won’t you please just listen/In the prison where you’re kept/And while your friends are still sleeping/And for years and years, what’s the use in shed tears/For the crimes you’ve committed/There’s no point to ask for forgiveness.”

Like on the first track, he counts off the beginning of the album’s final track, “Need Some Space.” This one has a very different feel. It’s a really interesting song, with some jazzy elements and unexpected changes, particularly at the end. Though he is asking for some space, the repeated line here is simple and direct: “I will miss your pretty face.”

The Biggest Lie was released on August 1, 2013. You can check out Christopher Cape here.
Posted by Michael Doherty at 11:20 AM