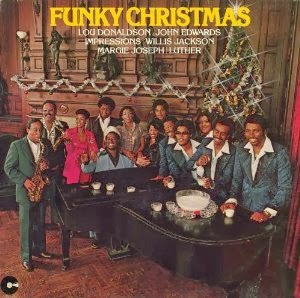 Every year I have a personal battle with Christmas music. It’s inescapable. There is Christmas music everywhere you go for the last two months of the year. The problem is that so much of the Christmas music is just bloody awful. And generally it’s the worst of it that most folks choose to play. Why? It’s not like there isn’t excellent Christmas music. There is. It turns out, there’s quite a bit of it. So every year it’s my mission to let folks know about the good Christmas music that’s available, in the selfish hope that they’ll stop assaulting me with that other shit.

This year another weapon on my side is the re-issue of Funky Christmas, a compilation of tunes by 1970s R&B artists. Not all of these tracks are great, mind you. There is definitely a cheesy element that often finds its way into holiday compositions. But there is enough good stuff here to add to your Christmas play lists.

The opening track is titled “May Christmas Bring You Happiness,” and it definitely embodies a lot of that obligatory holiday cheer. But it also has a delicious disco element that’s difficult not to enjoy. And the joy in Luther Vandross’ voice seems genuine, which helps make the song grow on you. There are some at-times glorious backing vocals too. This is an original track, written by Luther Vandross.

John Edwards tackles that Christmas staple, “The Christmas Song,” written by Mel Torme and Robert Wells. It begins promisingly with some cool jazzy work on piano. The guitar added to it is really nice. The problem is those familiar lyrics bring to mind other versions. But if you can forget those, you can get into the smooth, kind of bluesy delivery in this rendition. The vocals are very cool, and I dig the horns.

John Edwards also tackles “White Christmas,” and does some wonderful stuff with it, particularly in the vocals. And again, I dig the horn.

Often, instrumental is the way to go to avoid the pitfalls of the Christmas covers, and Willis Jackson does a beautiful instrumental rendition of “I’ll Be Home For Christmas.”

Conversely, “Silent Night” only starts to get good when the vocals come in. The Impressions really bring something to these lyrics. I’d cut the instrumental intro to this version. As the song goes on, it turns to something of a gospel tune, and oddly begins to drag at that time.

The Impressions do a disco version of “I Saw Mommy Kissing Santa Claus,” which isn’t all that interesting, though I dig that section at the end with the basic funk rhythm and the vocals playing over it.

It’s really difficult to do anything interesting with “Jingle Bells,” and rarely does that song shine. It’s just an inherently terrible song. Lou Donaldson does his best to bring some funk and life to it, but generally fails. It works only when he strays from the main line of the tune.

“Have Yourself A Merry Little Christmas”

This compilation concludes with Willis Jackson’s instrumental version of “Have Yourself A Merry Little Christmas,” a song I’ve never really cared much for. And holy moly, this is the first time I’ve ever totally enjoyed it. Willis Jackson finds something delicious and wonderful in it, and I actually wish it went on a bit longer, as the horn is excellent at the end. There is a disco element to it, but it doesn’t overpower the song. It’s the lead sections on saxophone that really make this rendition something special. This is definitely one that’s going on my Christmas play list.

Funky Christmas is scheduled to be released on November 12, 2013 through Real Gone Music.
Posted by Michael Doherty at 11:52 AM