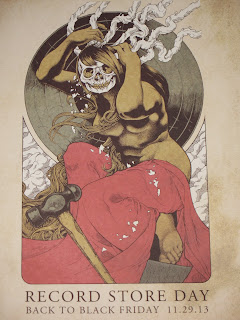 Yesterday was Black Friday (or, for those who care to be politically correct, African-American Friday), and that meant insane people stomping each other to save a few dollars at Walmart and other arenas. Every year I try to avoid leaving my apartment on this day. Black Friday signifies the beginning of the worst part of the year, when we’re assaulted by horrible music everywhere we go, when everything suddenly turns red and green and gold (hey, aren’t those Karma Chameleon’s dream colors?), when the same old crap is given sparkly new packaging, when trees are sacrificed for the good of seasonal décor, when just going out to buy some batteries becomes an ordeal, and when you’re miraculously supposed to be filled with good cheer. Ugh.

A few years ago, Record Store Day expanded, getting in on the Black Friday mayhem. I skipped it until this year when I learned a special Grateful Dead album was going to be released. While 1973 is my favorite year for Grateful Dead concert tapes, I’ve always had a soft spot for the acoustic sets of 1970 (and, to a lesser extent, those of 1980). Some of the first tapes I acquired were from 1970. And this year, as part of Record Store Day’s Black Friday fun, the Grateful Dead released Family Dog At The Great Highway, San Francisco, CA 4/18/70. I had to have it.

As soon as I’d made the decision to brave leaving the apartment and being out among the lunatics, I took a look at the full list of record (and CD) releases. And there was a second record I had to have: the double LP expanded edition of the Zabriskie Point soundtrack. The second album includes three tracks by Jerry Garcia that I’d never heard (all of which, by the way, were recorded in 1970). And on the first record is a snippet of the Grateful Dead doing “Dark Star” (also from 1970). In addition to that, this soundtrack includes a tune from John Fahey, which excites me as I just saw the documentary on him, In Search Of Blind Joe Death, and as a result am interested in hearing as much of his material as possible.

Beyond that, there was a special 7-inch by Uncle Tupelo and a live album by Nick Cave And The Bad Seeds that I was quite interested in. So, certainly enough worth waiting in line for.

Freakbeat opens at 11 a.m., so I got up at 8 a.m., and was on the road by 8:35 am. There was a very light rain, which sucks for those who are going to be standing in line. Plus, I didn’t want my purchases to get wet, so I packed a giant plastic bag into my backpack. Fortunately, Freakbeat is not that far away. Parking is an issue, because all the spots in the immediate area are two-hour spots, and I was going to need more time than that. On Record Store Day in April I found a spot on Moorpark, but this time that side of the street was closed for street cleaning. I wasn’t sure whether street cleaning happened the day after Thanksgiving, but I certainly wasn’t taking any chances (California will take money from you any way it can). I drove around for ten or fifteen minutes, and then a spot opened up on the other side of Moorpark. By then, it was raining steadily.

I got to the store just after 9 a.m., and there were only like eight or nine people there, all huddled in the doorway, where it was dry. There was enough room for me there as well, which was great. I introduced myself to a few of the other folks, and we ended up getting into a great conversation about music and about baseball (two of my chief passions). The time flew by.

As on the April Record Store Day, one of the Freakbeat’s employees came out a half hour or so before the store opened, and wrote down our number one choices. That way, everyone in line was certain to get at least one item he or she really wants. It’s a very cool way of doing it. I wasn’t sure which of my top two choices I should request. So I asked, “How many of the Grateful Dead record did you get in?” “A lot.” “And what about the Zabriskie Point soundtrack?” “We got five.” “Okay, I’ll take the Zabriskie Point soundtrack.” My new friends were getting the Bob Dylan 3-LP set and the Nirvana album as their number one choices. I, of course, also wanted the Dylan records, but as usual just didn’t have all that much money.

I then wrote on a scrap of paper: “Zabriskie Point, Grateful Dead, Uncle Tupelo 7-inch, Nick Cave And The Bad Seeds CD.” This time I was able to get all four things on my list, the total being $82.36. Holy shit! The Grateful Dead record was $37, a little more than I’d guessed it would be. But no matter – it’s an acoustic set from 1970 and includes a couple of songs I’ve never heard the Grateful Dead do. Totally worth it.

I slipped the store bag into the larger bag I’d brought for a little extra protection from the rain (which had become lighter but was still coming down). In my car, I took a look in the bag. The only free item this time around was a special poster – no CDs or records. Anyway, the whole thing was a relatively stress-free endeavor, thanks mainly to Freakbeat being such a cool store. These new records will help get me through the rest of this insane season. And come April, I’ll be ready for the next Record Store Day as well as baseball season. Go Red Sox!
Posted by Michael Doherty at 11:07 AM