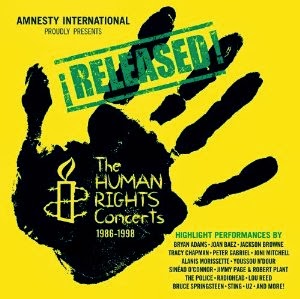 For the most part, I agree with the choices. A lot of the best material is included here, including U2’s “Pride,” Bruce Springsteen’s “No Surrender” and that fantastic version of Peter Gabriel’s “In Your Eyes.” The artists are presented in a somewhat different order from that of the DVDs. For example, on the CD, Bryan Adams is placed between Peter, Paul & Mary and Joan Armatrading.

A lot of music is packed onto these two CDs – thirty tracks, totaling more than two and a half hours. And as with the DVD box set, all net proceeds from this CD benefit Amnesty International.

This two-disc focuses mostly on the first concert, from New Jersey in 1986. This show marked and celebrated the 25th anniversary of Amnesty International. It opens with Bob Geldof and Steven Van Zandt doing Bob Marley’s “Redemption Song” (one of my favorite Bob Marley songs, and the song that also opens the DVD set).

Peter, Paul & Mary sound great, their vocals still quite strong at this point on the always-effective (and always-needed) “Blowin’ In The Wind.” And listen to the crowd singing out the first several lines of Bryan Adams’ “Summer Of ’69.” I still love that song.

We get Joan Armatrading’s “Love And Affection.” I would have chosen the other song from her set, “Steppin’ Out,” which for me was one of the highlights of the first DVD. From Jackson Browne’s set, we get “For America.”

Lou Reed’s set is one of the highlights of the 1986 concert, and from his set we get that wonderful version of “Walk On The Wild Side.” I love the work on bass in this version, and Lou Reed’s performance has great energy.

I really like Joan Baez’s version of “No Woman, No Cry,” backed by The Neville Brothers. That’s followed by “Hejira,” a very cool tune by Joni Mitchell.

The CD picks the best song from Peter Gabriel’s set, “Biko,” which is a powerful song. This version is particularly moving, and it’s followed by a highlight of U2’s amazing set – “MLK” into “Pride.” You have to see this footage on the DVD. But the CD definitely gives you a feel for the incredible energy and joy of the performance. That is matched, actually exceeded, by the absolutely fantastic version of “Message In A Bottle.” The set by The Police is one of the reasons to own the DVD set.

This CD also includes “I Shall Be Released,” performed by all the artists.

This concert in Argentina marked the 40th anniversary of the signing of The Universal Declaration of Human Rights. It opens with “N’Dobine,” a wonderful track by Youssou N’Dour, which has a great rhythm. For some reason, I’m appreciating it even more listening to it on CD. I love that percussion section.

Bruce Springsteen joins Sting for a really good version of “Every Breath You Take.” And Tracy Chapman does a solo acoustic version of “Talkin’ ‘Bout A Revolution.” But it is that great energetic version of “Born In The U.S.A.” by Bruce Springsteen & The E Street Band that makes this show something really special. It’s one of the major highlights. You can hear the audience singing the title line. (On the DVD, you can see the audience jumping in unison.) All the artists join Bruce for a nice rendition of Bob Dylan’s “Chimes Of Freedom.”

They had wanted to play Chile on the 1988 tour, but were not allowed. So when in 1990 it became possible, they put together a show, celebrating the end of a dictatorship. This CD set includes four songs from that concert. Sadly, the best track from the DVD – Wynton Marsalis performing “Jungle Blues” – is not featured on the CD. But we do get the wonderful “Bailando Bailando” performed by Inti-Illimani. The disc also includes that really good version of “Lives In The Balance” by Jackson Browne.

Sinead O’Connor does a strong performance of “Nothing Compares 2 U,” and then Sting plays “They Dance Alone,” joined by the other artists. That’s another of this show’s stand-out numbers.

On the fiftieth anniversary of the signing of The Universal Declaration of Human Rights, this concert was held in Paris, the city where the Declaration was originally signed. The artists from the 1988 tour played at this show, and were joined by several new groups, including a sort of Led Zeppelin reunion.

Tracy Chapman plays “Fast Car,” a song that totally holds up for me. And Youssou N’Dour joins Peter Gabriel for the best version of “In Your Eyes” I’ve ever heard. It’s incredible. After that we have to suffer through an Alanis Morissette song.

The CD includes “Karma Police,” the best song from Radiohead’s set. And after that is one of the best tracks, Bruce Springsteen’s solo acoustic version of “No Surrender.” We also get one song from the set by Jimmy Page and Robert Plant. The song chosen for the CD is “Rock And Roll,” which wouldn’t have been my choice, but is still pretty cool. The CD then ends with “Get Up, Stand Up,” performed by Peter Gabriel, Tracy Chapman, Bruce Springsteen and Youssou N’Dour.

Released! The Human Rights Concerts 1986-1998 was released on November 5, 2013 through Shout! Factory. On that same date, the six-disc DVD box set was also released.
Posted by Michael Doherty at 12:38 PM