In Search Of Blind Joe Death: The Saga Of John Fahey DVD Review 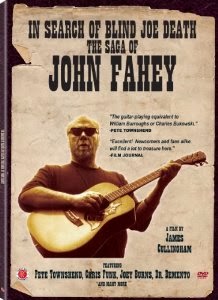 In Search Of Blind Joe Death: The Saga Of John Fahey is a documentary film about the excellent guitarist who has influenced many musicians over the years. The film features several interviews with musicians and musicologists, as well as old footage of John Fahey himself.

In Search Of Blind Joe Death opens with images of railroad tracks and the sweet sound of an acoustic guitar. Pete Townshend (one of the musicians interviewed) then says, “He seemed to me the kind of folk guitar-playing equivalent to sort of William Burroughs or Bukowski, Charles Bukowski.” That’s quite a statement, and one that immediately got me interested. I didn’t know a lot about John Fahey before watching this documentary, but now I want to go out and purchase a good deal of his output. (I’m also kicking myself for not seeing him when I was living in Oregon.)

There is some great old footage of John Fahey being interviewed on a television program. And then he plays an excellent instrumental tune, the camera focusing on the guitar itself. In another, later interview he talks about how he put his name on one side of his record, and the name Blind Joe Death on the other. “I thought it would be a good joke,” playing on the fact that a lot of the old blues performers had “Blind” as part of their name. In another interview excerpt, Fahey touches on some more serious subjects, including sexual abuse as a child: “You’re scared of your family, and that transmits into being afraid of everybody, really.”

Nanci McLean Sunicwick, who dated him in high school, gives some background on his youth. She also says, “John was an outlaw from start to finish. A very gentlemanly outlaw, but outside the strictures of his background.”

Barry Hansen (better known as Dr. Demento) was also a friend of his, and talks about how John was influenced by certain classical composers, particularly Bartok. He also talks about the influence of Charley Patton. One thing I found particularly fascinating was that Barry and John would go door-to-door in black neighborhoods asking if they had any old phonograph records for sale. John then went in search of those musicians, folks like Booker White and Skip James.

Stefan Grossman has some great anecdotes as well, including the time he first met John Fahey. We are then treated to old footage of John on stage talking about Stefan Grossman: “I hate his guts. I also hate his guitar-playing.” John, as a bit of a prank, even composed and recorded a song titled “The Assassination Of Stefan Grossman,” leading Stefan to return the favor with “The Assassination Of John Fahey” (the DVD’s bonus features include a performance of that song).

There are interviews with Pete Townshend (who talks about the letter John sent him regarding Tommy), Chris Funk (of the Decemberists), Joey Burns, Terry Robb, John Monday, Dean Blackwood and Melody Fahey (former wife), among others.

There are also some gorgeous shots of nature, specifically rivers, trees and turtles. And there are a few interesting animated sequences. And of course there is plenty of music.

The DVD contains more than an hour and a half of bonus material.  There are four interviews, including a 31-minute interview with Pete Townshend. He talks about how he considers himself a rhythm player, and says: “In The Who, our drummer, Keith Moon, is regarded as an extraordinarily eccentric and inventive guy, but one thing he could not do was keep time. So I did it.” There is an interview with Chris Funk, who talks about moving to Eugene, Oregon and meeting John Fahey and doing sound for him at Sam Bond’s Garage. The anecdote about John Fahey tuning to the juicer is great. Dean Blackwood tells an interesting story about the 78s. And Joe Bussard plays a record on an old Edison machine, and shows how it works.

The bonus features also include several performances. The first is John Fahey performing two songs at an unspecified location on an unspecified date. The other performances were recorded as part of the interviews for this documentary. Chris Funk plays Fahey’s “The Death Of The Clayton Peacock” and “Poor Boy.” Joe Bussard plays an instrumental tune, plus a Booker White song and a little of “Sittin’ On Top Of The World.” Stefan Grossman performs his song, “The Assassination Of John Fahey.” Jimmy Crosthwait performs “A Tribute To John Fahey.” George Winston talks about Fahey’s “Steamboat Gwine Round Da Bend,” then performs it on harmonica, then on piano. Terry Robb plays Fahey’s “When Springtime Comes Again” on one of John Fahey’s guitars. And Tim Knight plays a bit of his own “Peace For Eden Davis.” Pete Townshend was asked near the end of his interview to play something of Fahey’s, but he politely declined.

Also included in the bonus material are several audio excerpts from John Fahey interviews conducted by Ayal Senior in 1999. In one of those excerpts he talks about collecting records.

In Search Of Blind Joe Death: The Sage Of John Fahey was directed by James Cullingham, and was released on DVD on November 12, 2013 through First Run Features.

(Note: I also posted this review on Pop Culture Beast.)
Posted by Michael Doherty at 6:22 PM