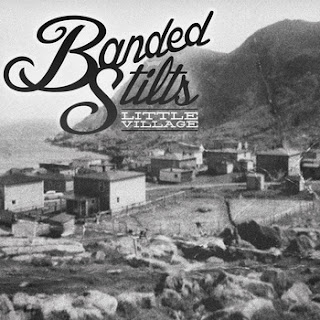 Little Village, the new album from Banded Stilts, is a wonderful blend of folk, country and pop, with some excellent lyrics, and songs that immediately make themselves a part of your world. Sometimes a certain song instantly makes itself part of your consciousness, becomes part of your life, connecting to you right away. Well, that happens several times with this album.

These are all original songs, my favorite being “Leave A Light.” This album features some beautiful blending of voices. Listen to “Gloria,” for example. Or listen to “Stars Go Down,” where their vocals at times remind me of CSN in the mid-1970s. There are a lot of excellent lyrics on this album. I like these lines from “Out On The Sea”: “You look like the portrait of when we first met/When we still had it all/We hadn’t lost a thing yet/But I feel so much older now/Since we moved out of there.” If you dig groups like The Band, then you'll likely enjoy this excellent Canadian band.

By the way, the album’s title comes from “Boy Of Stone,” the closing track: “I’ve been living here so long, can hardly remember when I last saw your little village.”

“The End Of February,” the album’s opening track, begins quietly, prettily, on piano, sounding almost like a sad child’s lullaby from long ago. Then the acoustic rhythm guitar and vocals come in: “If you listen closely in the kitchen, you can hear the pigeons coo/They have made a home inside a home as creatures often do.”  There is a sweetness to this folk tune, with nice country and even pop elements, and a positive vibe, with lines like, “You’ll go on to do great things/When you’ve got courage in your stride.” There are some really nice vocals near the end, joining in on “I never wanted you to go missing/I never wanted you to run and hide/I never wanted you to grow up/But you did.” The backing vocals on “Looking up at the sun” surprised me.

“Cold” has a great, friendly vibe, mostly because of the vocal line and violin. This is a good song for a winter night, so curl up next to your stereo with a cup of hot cocoa and a thick blanket. I love this tune. “And I’ll try not to freeze.”

“Leave A Light” is a gorgeous folk tune, with excellent vocal performances and a catchy guitar part. Check out these lyrics: “We got married in a burning fire/But now I’m lying face-down in the flames/And Marianne won’t leave the light on/I’ll be home again someday.” But it is the instrumental section – the violin and percussion – that really made me completely fall for this tune. This is one of my favorite songs of the year. It ends with this line: “Go fix the porch light, so I can find my way.” Sometimes it can be as simple as that. Or we hope it can.

“Gloria” is driven by piano, and features a pretty instrumental section. It’s a wonderfully sad song. “They said you tried to tear their families apart/They said home-wrecking, you had made it your art.” The vocals have the perfect melancholy tones. “Things ain’t the same since you’ve been gone/Were you in the right, or were you in the wrong?”

On “Wading Bird,” the vocals remind me a bit of early Neil Young. This one starts off nice and slowly, with piano and vocals, creating an interesting vibe. Then a trombone leads the song into a different section, with a change in the percussion, a faster pace, a more urgent feel. This is an unusual song, one I like more each time I listen to this album.

“The Squid And The Ghost Town” begins with brighter, happier tones, but it is a strange sort of waltz. The song creates an interesting atmosphere and tells a good tale. “They were dancing in the street/They were waltzing in the square.”

Little Village was released on October 8, 2013.
Posted by Michael Doherty at 1:49 PM