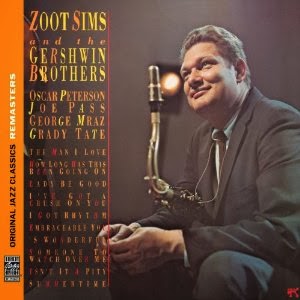 One thing I’ve learned in my life is that you can always count on a Gershwin composition. These songs will never let you down. In 1975, Zoot Sims recorded an album of Gershwin tunes, Zoot Sims And The Gershwin Brothers. Joining Zoot on this record were Oscar Peterson on piano, Joe Pass on guitar, George Mraz on bass and Grady Tate on drums. This album was recently re-issued by Concord Music Group, as part of its Original Jazz Classics Remasters series, with three bonus tracks, two of which were previously unreleased.

The album opens with a fun, sweet rendition of “The Man I Love,” a song written for Lady, Be Good. Zoot Sims is clearly having a great time playing this tune, and playing with it. I also really like the bass line by George Mraz. Oscar Peterson, as always, plays the hell out of his lead spot. Wonderful.

That’s followed with a sexy, slow rendition of “How Long Has This Been Going On?” At moments it’s so smooth. This one is all Zoot, and it’s great.

“Oh, Lady, Be Good!,” the title track from the Broadway comedy, begins with some nice playing by Oscar Peterson, but it’s when the rhythm section kicks in that I really begin to groove on this song. George Mraz and Grady Tate get things cookin’ for Zoot’s entrance. And there is such joy in Zoot’s playing, over that swinging structure. The bonus tracks include an alternate take of this song, a version that was previously unreleased and features some excellent work by Oscar Peterson on piano.

Oscar Peterson opens “I’ve Got A Crush On You” with a sweet, pretty yet playful piano solo. Then Zoot comes in after approximately forty seconds, blowing smoothly on this sweet rendition. A second version of this song is included in the bonus tracks, a version that was previously unreleased and on which Oscar Peterson has a slightly longer solo to start.

Zoot Sims starts off this version of “I Got Rhythm.” And at first, these guys seem to be holding back, giving a slightly muted performance. But it isn’t long before things get going. It feels like George Mraz on bass urges the song off the ground. And soon Zoot is letting loose. And then Joe Pass takes over the lead spot, giving us some delightful stuff, with Oscar Peterson answering him on piano at times – which are some of my favorite moments. Oscar then takes over, and wow. Grady Tate responds on drums to this new energy, and the song becomes a deliriously fun number. Zoot comes back in and everyone keeps up the tempo and energy. This is a great version.

“Someone To Watch Over Me” is one of my favorite Gershwin songs. This version begins with Oscar Peterson on piano before Zoot comes in with the vocal line on his tenor saxophone. And it’s beautiful. When Oscar takes the lead, backed by Mraz on bass, the song certainly has a bit of a swing to it. (Oscar Peterson, along with Joe Pass, would include a version of this song on Skol, which was also re-issued by Concord Music Group.)

The original album concludes with a truly interesting rendition of “Summertime,” which begins with Grady Tate on the drums, and then with an intriguing addition to the rhythm by Joe Pass, George Mraz and Oscar Peterson before Zoot comes in. This is not the typical slow rendition I’m used to. But it works really well at this pace, and there’s a groovy lead section by Joe Pass on guitar. There is also a bass solo that I really like. Oddly, the song fades out.

In addition to alternate takes of “Oh, Lady, Be Good!” and “I’ve Got A Crush On You,” the bonus tracks include “They Can’t Take That Away From Me.” This one begins with a great, fun, mean groove featuring Oscar on piano. Then Zoot comes in, all smooth and sultry. But this is a fun tune with a delicious groove. I love what Grady Tate does on drums. This is actually one of my favorite tracks on the CD.