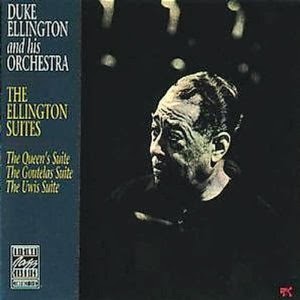 The Ellington Suites is a collection of three suites composed by Duke Ellington and performed by Duke Ellington And His Orchestra. This is truly some excellent music from late in Duke Ellington’s career. The music contained in these pieces is sometimes gorgeous (“Sunset And The Mocking Bird”) and at times exciting (check out “Apes And Peacocks”), but always wonderful. This special re-issue, as part of Concord Music Group’s Original Jazz Classics Remasters series, includes a bonus track, “The Kiss,” which was previously unreleased.

This re-issue contains new liner notes by Ashley Kahn, as well as the original notes by Stanley Dance. The album was remastered by Joe Tarantino.

The Queen’s Suite is music dedicated to Queen Elizabeth II. Duke Ellington had been invited to perform for the queen, and that visit inspired this music. He then pressed a single copy and presented it to the queen. These tracks were recorded in February and April of 1959.

It opens with “Sunset And The Mocking Bird,” which is so beautiful and sweet. And then there is something really fun about “Lightning Bugs And Frogs,” with the instruments interacting and conversing. “Le Sucrier Velours” opens with some nice work on piano by Duke, and then it becomes a very pretty, slow dance.

“Northern Lights” opens with a power, then settles down a bit, but goes in surprising and delightful directions. There is something almost tribal about Jimmy Johnson’s drumming. This track was written by Billy Strayhorn, the only piece in this collection not composed by Duke Ellington.

“Single Petal Of A Rose” is a soft, beautiful song that really focuses on Duke Ellington’s piano-playing. In fact, he is accompanied only by Jimmy Woode on bass. There is something both loving and exciting in the song’s mood. And then “Apes And Peacocks” begins with some wild percussion, soon feeling like a strange procession through a jungle, full of dancers and exotic animals and bursts of light through the trees. This fantastic piece was written by Duke Ellington and Billy Strayhorn.

The Goutelas Suite is a lot different from the first suite, this one inspired by a very different occasion, the restoration of a chateau in France. It begins and ends with bursts of fanfare, and includes some incredibly lively compositions, particularly “Get-With-Itness,” which has a very hip vibe and at times moves like a great, breathing cartoon machine.

“Something” is a calmer and more emotionally moving and charged piece. Just relax and let it carry you like a gentle river. Another lively track is the vibrant and aptly named “Having At It.” The horns really take over here. But also check out that great fast-paced bass line.

The Uwis Suite was recorded on October 5, 1972. The name refers to the University of Wisconsin, where a Duke Ellington festival took place in 1972. “Uwis” early on has a cool groove dominated by the bass, with some bright accents and bursts on horns. It also has some definite and interesting changes throughout, with the horns rising to prominence.

“Klop” is a delightful and comical but sincere polka (yes, seriously). “Loco Madi” moves like a train. It’s the longest track in the collection, at just over nine minutes, so there is lots of room for various leads. This is a really good and fun piece of music, and it never breaks down, but fades out at the end, traveling off into the distance.

This re-issue contains the previously unreleased composition, “The Kiss.” This track was recorded at the same session that gave us The Uwis Suite. This is an interesting ride, with a good, steady rhythm below the song of the horns. At times, it seems to approach a glorious chaos, as its emotions really voice themselves urgently, joyously. And then toward the end, the others bow out, and Rufus Jones takes over on drums. Fantastic.