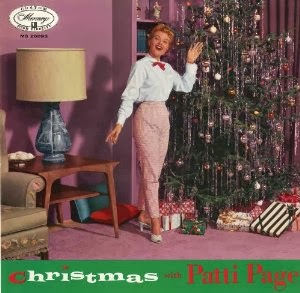 Like everyone else on the planet, I absolute love Patti Page’s rendition of “Tennessee Waltz.” That’s a fantastic song. One thing I didn’t know before – and learned only now while reading the new liner notes for Christmas With Patti Page – is that that song was originally the flip side for “Boogie Woogie Santa Claus.” That’s right – a Christmas song was at least partly responsible for one of my favorite recordings. That Christmas song is included in the bonus tracks of the new special re-issue of Christmas With Patti Page. This re-issue contains five other bonus tracks, including three songs from The Patti Page Show. There are also new liner notes by Tim Akers.

Christmas With Patti Page starts with one of the most popular Christmas songs, “Jingle Bells.” This is one of the best versions I’ve heard, due to its horns and that nice jazzy bass line. That bass line almost succeeds in making this a cool song. The problem, as always, is the song’s lyrics. But Patti Page delivers them with joy, and that’s really all you can ask. She plays around with the title line toward the end of the song.

“Silent Night” begins with the choir before Patti comes in. And their voices do sound beautiful backing her. That’s followed by “Christmas Choir,” in which Patti sings at the beginning, “Listen to the choir.” It’s kind of a sweet tune, driven by some very pretty vocal work. It was written for Patti Page by Kermit Goell and Marty Brown.

One of the catchier tunes on this album is “Christmas Bells,” written by Harry Filler and Leonard Schroeder. It’s got a bit of swing to it, which is cool. It starts, “The Christmas bells are ringing/The holly’s at the window pane/I hear the children singing/It’s Christmas again/The fire place is glowing.” It’s one of those Christmas songs that paint an ideal picture of the world for the holiday, with lines like “Crowds of smiling people greet you everywhere.”

Patti Page and her musicians pump some big band energy into “Santa Claus Is Coming To Town,” and I actually do like the end of this rendition.

“Pretty Snowflakes” is a very playful tune about winter and snow, not about Christmas specifically, and perhaps that’s part of what makes this one of my favorite tracks. It’s really a delightful song. “Pretty snowflakes/Pretty snowflakes/Falling down from the sky/How I wonder where you come from/As you flutter by.” Of course, it does have that overly optimistic portrait of humanity present in so many Christmas songs, with lines like, “The whole world is smiling and bundled up tight/Oh, what a wonderful sight.”

“I Wanna Go Skating With Willie” is another delightful, playful tune. Again, it’s not specifically a Christmas song.

“Where Did My Snowman Go?” is much less fun, due mainly to the harsh screams of the children. It’s too much, and feels relentless, almost like an assault. Seriously. You’ll want to turn the volume down a bit for this one.

“The Mama Doll Song” is so silly (with Patti imitating the doll saying “Mama”) that you can’t help but love it. This song was released as a single, and was actually a top forty hit on the Billboard chart. Wow, what a different world.

This re-issue contains six bonus tracks. The first is “Boogie Woogie Santa Claus,” the single that was sort of responsible for “Tennessee Waltz.” For that alone, it’s an important track. But it’s actually a pretty cool tune, with a good rhythm. It paints a slightly different picture of Santa: “He lives up in the mountains like a hermit in a cave/Never had a haircut, never took a shave.”

“Little Donkey” is a strange song featuring some excellent vocal work from Patti Page. This was released as a single in 1959.

And there is a radio spot in which Patti Page wishes folks a merry Christmas and a happy new year.

This special re-issue of Christmas With Patti Page was released on October 29, 2013 through Real Gone Music.
Posted by Michael Doherty at 12:26 PM