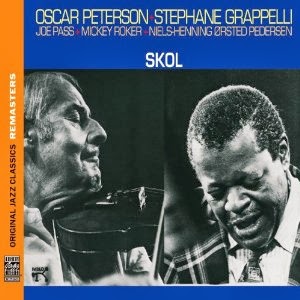 Skol is recording of a concert that Oscar Peterson and Stephane Grappelli performed on July 6, 1979 in Denmark. Joining them for this show were Joe Pass on guitar, Niels-Henning Ørsted Pedersen on bass and Mickey Roker on drums. This a recording of musicians at the top of their game doing what they so clearly love. It’s a total delight listening to this album. And the recording is so clear. It was remastered by Joe Tarantino as part of the Original Jazz Classics Remasters series. This re-issue also contains new liner notes by Tad Hershorn.

By the way, skol means cheers.

Skol opens with a great Django Reinhardt composition, “Nuages.” And as you might guess, there is plenty of great guitar work on this track by Joe Pass, who begins the song, before Stephane Grappelli takes over on violin. And that’s when this rendition becomes so beautiful and moving. Seriously, this is a gorgeous version of the classic tune. The feel certainly changes when Stephane bows out and Oscar Peterson takes over. But his piano-playing is so impressive and delightful. And there is a violin solo toward the end of this track.

“How About You?” is a bright, chipper tune. The first thing that hits me about this track is the great rhythm by Niels-Henning Ørsted Pedersen on bass and Mickey Roker on drums. But then, holy moly, check out that great lead on piano by Oscar Peterson. Joe Pass keeps things cooking on guitar, and then there’s a bass solo by Niels-Henning Ørsted Pedersen.

I love that music can still amaze and surprise me. I would not want to live in a world devoid of music like this.

“Someone To Watch Over Me”

“Someone To Watch Over Me” is one of my favorite Gershwin tunes. Stephane Grappelli takes over the vocal line on violin, and it’s wonderful. Oscar Peterson then comes in where he leaves off. This is a song I always love to hear on piano. It’s a perfect song, and this is a really good rendition. Check out those high notes on violin.

“Makin’ Whoopee” begins with some delicious, mean work on piano, before the violin comes in duplicating that sweet vocal line. This is always a fun song, and I love Joe Pass’ lead guitar section. Oscar Peterson then does some fantastic stuff on piano. This is a joyous rendition.

This CD also includes a sweet recording of “That’s All.” I found myself smiling throughout, and revisiting fond summer memories. It’s interesting that sometimes when something makes you feel so good, your mind automatically draws parallels with other joys from your past, just mixing them up, sort of releasing you from the constraints of time. It’s like a little gift from you to you.

The original album concludes with a seriously cool tune, “Skol Blues,” written by Oscar Peterson. It begins with some wild stuff by Niels-Henning Ørsted Pedersen on bass. And then Peterson comes in on piano. I love the energy of this tune. And hey, it includes an excellent bass solo.

This special re-issue contains three bonus tracks, all of which were previously unreleased. That’s just over nineteen minutes of extra music. The first is a great version of “Honeysuckle Rose,” with some excellent work on violin by Stephane Grappelli, and some tremendous playing by Oscar Peterson on piano.

Things then slow down with a thoughtful, beautiful version of “Solitude.” This track has probably Stephane’s prettiest, smoothest playing on the whole CD.

The last track is another classic Gershwin tune, “I Got Rhythm,” played with great energy. I especially love what Joe Pass does on this one.

This special re-issue of Skol was released on September 17, 2013 through Concord Music Group as part of the Original Jazz Classics Remasters series. Also released on that date, in the Original Jazz Classics Remasters series, were Duke Ellington And His Orchestra: The Ellington Suites; Dizzy Gillespie, Joe Pass, Ray Brown, Mickey Roker: Dizzy’s Big 4; Zoot Sims: Zoot Sims And The Gershwin Brothers; and Art Tatum: The Art Tatum Solo Masterpieces Volume One.
Posted by Michael Doherty at 10:35 AM