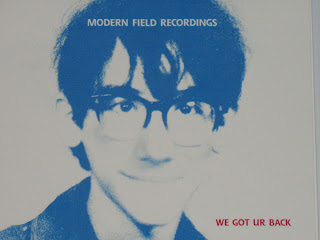 I have to admit, this CD had one strike against it before I even put it in the player. That being its title, We Got Ur Back. People writing "Ur" instead of "your" drives me nuts, and if I ever go on a murderous rampage, you can be be certain that's the cause. So anyway I was a bit hesitant. But the moment the first track started, this band won me over.

Modern Field Recordings are based in Guelph, Ontario (which is a bit west of Toronto, for those unfamiliar with the area) . They formed in early 2009. We Got Ur Back is their second album. The first, a self-titled CD, was released in February of 2010.

They play a weird and wonderful hybrid of folk, indie pop and punk that you can't help but enjoy. It has a sort of timeless feel, but with lyrics that speak to us right now. And there is a subtle sense of humor too, something I always appreciate. In a song titled "Titanic" they include the line, "People make mistakes." (By the way, that's a song you should listen to on headphones.) Also, these songs are really love songs - to one degree or another.

Any album that begins with a few sweet notes on harmonica cannot be bad. "Banana Split," the CD's opening track, has a cool, easy sound. Here is a bit of the lyrics: "Watch out, those of you wearing headphones as an excuse not to say hello/Because you'll never know/What keeps us in at night."

This song, like many on this album, is about communication, about reaching out, with lines like, "And gentle ladies, the answers will arrive if you walk beside each other." And in fact it seems to be about reaching out to the band itself, in the line, "In the three of us you will find hope, so be good to each other."

Despite its poorly spelled title, "We Got Ur Back" is actually a sweet song. It even begins with banjo, which I love. In this one, they sing, "It doesn't matter what you believe or what you need/Because we've got your back." I really love this song. I love the feel of it, its message, its sound. It's a truly beautiful tune.

"Make A Life" is a wonderful sort of uneasy love song. Check out these lines: "We first ended last week/You left, I lied/You were right/I tried not to believe/That I might be feeling the same/And what a mistake we've made."

And yes, the short intense instrumental sections with xylophone remind me a bit of The Submarines.

"Bus Stop" oddly reminds me of some of Jim Infantino's early work - more in the tone than in the lyrics, and more in the verses than in the chorus. This song has the wonderful plea, as the instruments fade: "Just leave some room for romance." And then come these lines: "We'll load stuff into my boss's car/We'll carry on and go too far/About this trip, about our relationships/How we got started and how we ended." This song allows the bass to essentially be the lead instrument at times, which is cool.

I had to ask someone what the letters "TTYL" stood for. It's "Talk To You Later," for those like me who are gleefully ignorant of such things. I detest internet-inspired abbreviations. But the title works, because this song is actually about the internet, and specifically about communication on the internet.

This year Diana Jones also released a song called "I Don't Know" in which she admits not having answers. It's interesting how these uncertain times are reflected in these songs. And in this song by Modern Field Recordings, the uncertainty is stressed in the repetition of "I don't know," a line repeated several times in a row.

Here is a taste of the lyrics: "And what if we were rich and evil/Would we take advantage of all the pretty people/On this earth what do we deserve/Should there even be a rich or a poor/Because I don't know/I don't know."

The album concludes with "Last Month In Korea," another song in which the bass plays a really key part. This song has an intensity, particularly in the sections with the steady beat. And there are also quiet, pretty moments. I really dig this song.