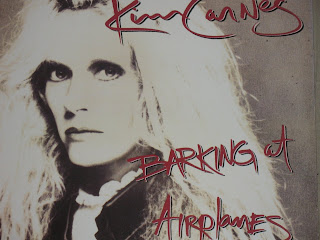 There is a lot of great music associated with Halloween, including fun tunes for a Halloween party. As might be expected, several of these songs are from the early to mid-1980s, a ridiculously fun time for music in general.

Michael Jackson's "Thriller" is an obvious choice for a Halloween mix. But it's also a perfect choice. Not only is it a fun dance song, but it has a great Halloween eerie feel to it. And the lyrics completely fit the mood: "It's close to midnight and something evil's lurking in the dark/Under the moonlight, you see a sight that almost stops your heart/You try to scream but terror takes the sound before you make it/You start to freeze as horror looks you right between the eyes/You're paralyzed."

This song was the title track to Michael Jackson's 1982 release. It wasn't released as a single until January of 1984. It was the seventh and final single from that album. And then there's that incredible music video in which Michael Jackson plays a Teen Wolf and then a zombie. It was directed by John Landis, and features a sort of rap by Vincent Price, placing it as the best music video ever made.

Its lyrics are perfect for Halloween, with references to The Twilight Zone and Psycho. Here is a bit of the lyrics: "When I'm in the shower/I'm afraid to wash my hair/'Cause I might open my eyes/And find someone standing there/People say I'm crazy/Just a little touched/But maybe showers remind me/Of Psycho too much."

Along the same paranoid lines, there is the wonderful "Crazy In The Night (Barking At Airplanes)" by Kim Carnes. This is a seriously fun song from 1985, and it's one that's often overlooked for Halloween. But check out these lyrics and decide for yourself if it fits the bill: "There's a monster on my ceiling/There's a monster on the wall/There are thousands in the closet/Now they're coming down the hall/I'm so hidden they can't find me/But then again they might/What can I do to keep from going/Crazy in the night." Kim Carnes is totally cool. That's all there is to it.

And while on the paranoid bent, why not include "Destroyer" by The Kinks? This is a fun little song that totally works for Halloween. Well, sort of. Here is a bit of the lyrics: "And there's a little green man in my head/And he said, you're not goin' crazy, you're just a bit sad/'Cause there's a man in ya, gnawin' ya, tearin' ya into two."

Also, the song revisits Lola, the transvestite from the most famous of all Kinks songs. And really, what is Halloween without a good dose of transvestism? "Destroyer" is from the 1981 album Give The People What They Want.

"Bark At The Moon" by Ozzy Osbourne is another great choice for a Halloween party. It's the title track from his 1983 record. Ozzy sings, "Years spent in torment/Buried in a nameless grave/Now he has risen/Miracles would have to save/Those that the beast is looking for/Listen in awe and you'll hear him/Bark at the moon."

Sure, werewolves are scary. But don't forget the relatives of werewolves, who should also be invited to Halloween parties. There is "Wolfman's Brother" by Phish. Here is a taste of the lyrics: "Well it was many years ago now/But I really can't be sure/That's when it all began then/I heard that knock upon my door/And the wolfman's brother/The wolfman's brother/Came down on me."

And so it's natural that music from this film would be played at Halloween parties. Most people who choose to include music from The Rocky Horror Picture Show pick "The Time Warp" and "Sweet Transvestite." While those songs certainly work, there are two others from that film that are equally pertinent to Halloween: "Science Fiction Double Feature" and "Over At The Frankenstein Place."

"Science Fiction Double Feature" mentions all sorts of cheesy sci-fi horror classics, like The Day Of The Triffids, The Invisible Man and Tarantula. And "Over At The Frankenstein Place" mentions...well, Frankenstein. So there.

There are a couple of television theme songs that are perfect for a Halloween party. The best is the theme to The Adams Family with lines like, "They're creepy and they're kooky/Mysterious and spooky/They're altogether ooky/The Addams Family."

Other television theme songs that might work include those for The Munsters, Scooby Doo, Alfred Hitchcock Presents, Outer Limits, Dark Shadows and The Twilight Zone.

And while not a theme song, there is always "Twilight Zone" by Golden Earring. This song works for a Halloween party, with these lyrics: "Help I'm steppin' into the twilight zone/The place is a madhouse/Feels like being blown/My beacon's been moved under moon and star/Where am I to go/Now that I've gone too far." This song is from Golden Earring's 1982 record Cut.

There are many other great songs for a Halloween party, including some classic Halloween songs, as well as some more recent, but lesser known songs. There are also many Halloween compilations such as Haunted Hits: An Hour Of Scary Songs & Sounds (1996) and The Monster Mash Rock 'N' Roll Party (2000).