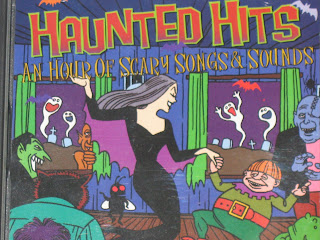 Halloween is the best holiday of the year, and that's partly due to the great music associated with the holiday. Here are some of the classic rock songs related to Halloween.

"Monster Mash" is probably the most famous of all the Halloween-related songs. It was originally recorded by Bobby "Boris" Pickett and released in 1962. It was soon covered by The Beach Boys, and then after that by many other bands.

For the two or three people on the planet who are unfamiliar with this song, here are the first several lines of the lyrics: "I was working in the lab late one night/When my eyes beheld an eerie sight/For my monster from his slab began to rise/And suddenly to my surprise/He did the mash/He did the monster mash." This song is basically a requirement for any Halloween party.

"Haunted House" is a strange song by Jumpin' Gene Simmons (and no, that's not the Gene Simmons from Kiss). It starts off like a normal Halloween haunted house story, with these lyrics: "I just moved in my new house today/Moving was hard but I got squared away/Bells started ringing and chains rattled loud/I knew I'd moved in a haunted house."

But then it gets weird. Check out these lyrics from later in the song: "In the kitchen my stove was a blazing hot/Coffee was a-boiling in the pot/The grease had melted in my pan/I had a hunk of meat in my hand/From out of space there sat a man/On the hot stove was pots and pans/'Say that's hot,' I began to shout/He drank the hot coffee from the spout." What is that about? Well, this is also possibly the only song to contain the word "haint," which means "ghost." The line is, "Ain't no haint gonna run me off."

"I Put A Spell On You" might be the coolest song ever that's become associated with Halloween. The original version is by Screaming Jay Hawkins, and it's just a fantastic song. This song basically defined Jay Hawkins and led to him creating an onstage persona and show that included him emerging from a coffin and holding a skull on a stick.

This song has been covered many times. Some of the covers worth checking out are the ones by Nina Simone, Creedence Clearwater Revival, Joe Cocker, Marilyn Manson and Buddy Guy (Buddy Guy's version features Carlos Santana).

"Werewolves Of London" is another really well known song associated with Halloween, and it's another song that absolutely should be played at any Halloween party. It's by Warren Zevon, and was included on his 1978 release Excitable Boy. It's a fun song with some great lyrics. Really, it's worth it just for the line, "I saw a werewolf drinking a pina colada at Trader Vic's/His hair was perfect."

"Witch Doctor" is one of the silliest and most fun of the Halloween-related songs. It was written and recorded by Ross Bagdasarian, but released under the name David Seville in 1958. This song, like most of the classic Halloween songs, has been covered by many bands over the years. Sha Na Na actually did a really good version of it. Perhaps the most famous version is that by Alvin And The Chipmunks.

These are a few of the classic Halloween-related tunes. There are, of course, many other great songs to choose from for play at a Halloween party, including some more recent, buy perhaps lesser known songs and music from film soundtracks.

"Haunted House," "Monster Mash," "I Put A Spell On You" and "Werewolves Of London" are all included on the compilation Haunted Hits: An Hour Of Scary Songs & Sounds (1996).