The Evangenitals at The Golden Spur 9-24-11 Concert Review 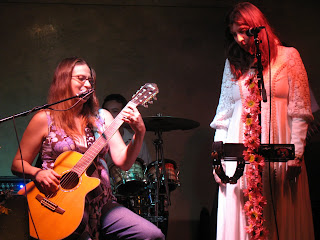 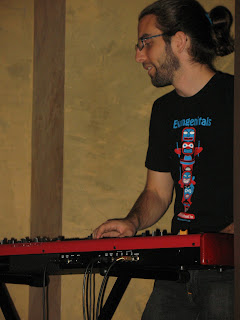 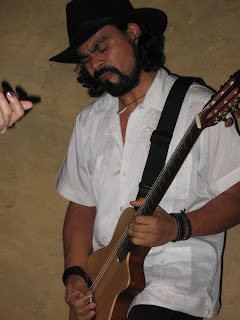 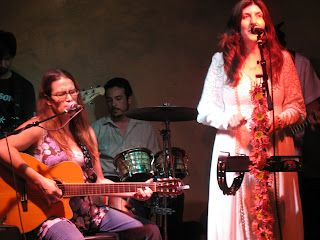 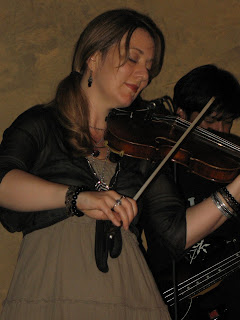 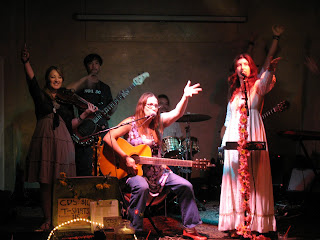 The Evangenitals are one of my favorite bands. They're also a band that always seems to be going through changes. Drummer Kristy McInnis just left the band after getting a gig in Chicago on Rosie O'Donnell's new show. But that's not the biggest change. Lead singer/guitarist/songwriter Juli Crockett is about to give birth to her first child, so there are only a couple of shows left before the band takes a break. She and keyboardist Michael Feldman recently got married. One might think these things would slow a band down, but Saturday night they played three sets at The Golden Spur in Glendora, California. The only indication that the band might be performing at anything less than peak capacity was that Juli was seated for this show.

They opened with a cover of Devo's "Girl U Want" (originally released on that band's 1980 record, Freedom Of Choice). After that, almost the entire rest of the first set was original songs, including the always-pertinent "Hard Luck Song" and the incredibly beautiful and uplifting "Sadie Hawkins." The latter song really showcases fiddler Andrea Baker's talent.

Another song that features some great work on fiddle is "Bad Town." This song also features the impressive talent of guitarist Henry Bermudez. Henry is one of my favorite guitarists. I'm not quite sure how many bands I've seen him play in over the years, but these days he's focused solely on The Evangenitals.

In the middle of "Bad Town," there is that great guitar/fiddle duel, which was particularly wonderful at this show. That led into a short bass solo. The Evangenitals have had many bass players over the years, and last night Joey Maramba did some great stuff with that section - quite different from anything I'd heard before. Juli changed the line "every motherfucker" to "every mother's daughter" because there were children in the audience.

After the song, Lisa Dee said, "We encourage dancing." "Don't be shy," Juli added, "There are nice wood floors."

Lisa took over lead vocals for a section of "Never Too Late," which was wonderful. That song also featured a great fiddle solo by Andrea Baker followed by a cool keyboard solo by Michael Feldman.

The first set ended with the second cover of the night, "Tall Lover Man," a song by June Carter, and one that Juli used to do during her days with Cash'd Out.

The Evangenitals opened the second set with the soft and sweet "Quee Queg," one of several songs related to Moby Dick (a book that Juli has a minor obsession with) that the band plays. Lisa plays guitar on this song. Joey used a bow on his bass for this one. Interestingly, there were no cymbal crashes during the "storm brewing" line. This was only Dominique Rodriguez's second show as the band's drummer (the first being just the night before), so he's still finding his footing. But each drummer in this band has done different things with that line. Kristy's approach was very different from David Hurlin's, for example. It will be interesting to see what direction Dominique takes it.

Henry Bermudez did some wild stuff on guitar on "Ahab's Leg," and that was even before his solo. After the song, someone in the audience shouted out, "That was a great song." Indeed.

"Just Stay Away" had more energy than it used to. It's fuller now, helped by Michael Feldman's work on keys and some cool work on bass by Joey Maramba. I also really dug Dominique's rhythm on this one. It's interesting that this band can find new places to go within so many of these songs. It keeps things fresh for them and for their audience.

One of my favorite songs from the second set was "How Can I Choose." This song is like some insane kick-ass hoedown on amphetamine. Juli introduced the song by saying, "This song is a question. It has no answer."

They also did a fast, happy rendition of "Bury Me Beneath The Willow," a song that most bands perform as a slower number. This version featured a wonderful solo on fiddle, followed by a bass solo.

The band started the third set with two of their best tunes: first, the beautiful "Don't Wake From Dreaming," and then the simply amazing "The Lee Shore." Before that song, Juli turned to the rest of the band, and said, "Let's try a gentle version of 'The Lee Shore.'" But almost right away Henry went mad on guitar - forget gentle - they flew into the tune (probably my favorite song of theirs), and didn't look back. This is their most intricate song, with several distinct sections. It is a powerful and wonderful song, and is another of the band's Moby Dick tunes.

Years ago I heard Martin Sexton do an incredible version of Prince's "Purple Rain." It seriously blew me away, and I thought I'd never hear anyone else do a version to match it. Then The Evangenitals began covering it. You really have to be there to experience this song the way they do it. I'm not even going to attempt to describe it. But suffice it to say they did a terrific rendition at The Golden Spur, and each band member had a turn at a solo during the song.

They then wrapped up the show with their usual closer, the high-energy "Gasoline."

There was no encore.

The Evangenitals are Juli Crockett on vocals and guitar; Lisa Dee on vocals, percussion and guitar; Henry Bermudez on guitar; Andrea Baker on fiddle; Michael Feldman on keyboard; Joey Maramba on bass; and Dominique Rodriguez on drums.

Your next chance to catch The Evangenitals is this Wednesday at The Basement Tavern in Santa Monica. If you haven't seen them perform, and you are in the area, I highly recommend you check these guys out.
Posted by Michael Doherty at 3:37 AM