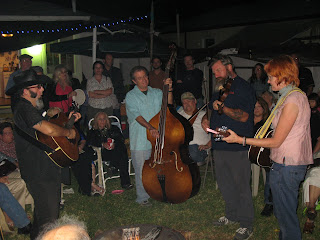 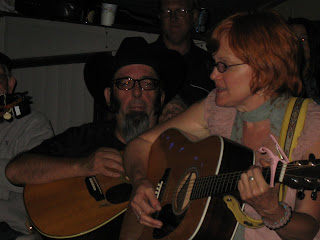 Fur Dixon & Steve Werner announced recently that they're going to record one of their concerts and release it as a live CD. For anyone who has seen this duo in concert, this comes as welcome news. They always put on a great show, and their energy, warmth and humor should translate well to a live disc. For those who still haven't heard them, this album (when it's released) will work as a great introduction. Fur Dixon said that they're going to play songs from each of their full-length CDs, as well as a few other treats, at the concert.

The recording will take place on Sunday, September 18, 2011 at Alvas Showroom in San Pedro. Tickets are twenty dollars. The CD is tentatively scheduled for release in early December.

Fur Dixon & Steve Werner are also known for throwing wonderful back yard parties, at which they and their many talented musician friends play songs around a fire. They announced this live CD at their last party, which was Saturday, September 3, 2011. At the beginning of their set that night Fur said that she was glad of the 500 people they invited that those present were the ones who made it. Steve joked, "We'd rather hang out with you than with the finest people of the world."

They opened their set with "Homesick For The Highway Blues," which has a yodel section, and Steve got the crowd to yodel along with him. That led Fur to say, "Van Nuys - folk capital of the world." Paul Marshall joined them on stand-up acoustic bass halfway through the song. And Cliff Wagner joined them on fiddle just as they were ending the song - so they started it up again.

They then played two songs from their newest release, Songs Of The Open Road: Randall Lamb's "I Like How I Feel" and Woody Guthrie's "Do Re Mi." They rounded out the set with the audience favorite "Backroads And Blue Skies" and "I'll Fly Away," by request.


After those songs, other folks took turns at picking songs and singing lead. Though later in the night, Fur & Steve played "Summer's Gone Again." And Steve did a cool version of "Lovesick Blues."
Posted by Michael Doherty at 2:24 PM