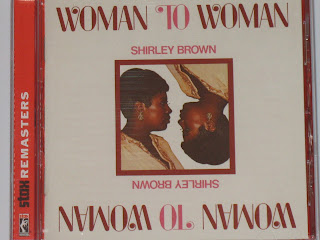 Woman To Woman was Shirley Brown's debut album, originally released in 1974. Its title track was a big hit for Shirley and for Stax, and was in fact the last big hit for that record company, which closed at the end of 1975.

If you're an Aretha Franklin fan (and who isn't?) you should absolutely check out this recording. Shirley gives Aretha a run for her money in the vocals department. And every note, every syllable is so heartfelt, so open, pulsing with emotion. Shirley is in that wonderful territory that Aretha Franklin so often occupies, particularly on a song like "I've Got To Go On Without You" (which has the line "You're the best and the worst thing that I've ever had").

And in the bonus tracks, she actually covers an Aretha Franklin-penned tune, "Rock Steady" (as well as "Ain't No Way" and "Respect," both of which are so closely tied to the Queen of Soul).

"It Ain't No Fun" begins with delicious "mmmm" from Shirley Brown. She then tells us the situation, "We'll sit and talk/And you'll pretend that your love for me is gone." This is a wonderfully emotional song, and it's Shirley Brown's vocals that really propel this song right into your heart. She's amazing. Listen to her on lines like, "I wish I knew the words to say to save the love that's slipping away, away from me."

She has a spoken word part a few minutes in that I could do without. It even mentions a television commercial, which for me weakens the emotional impact of the song. But holy moly, when she gets back to singing, listen to her belt out the lines at the end.

"It Ain't No Fun" was written by Frederick Knight. (Leonard Cohen fans will recognize him as the writer of "Be For Real," which was covered on The Future.)

"Long As You Love Me"

"Stay With Me Baby"

It begins, "Where did you go when things went wrong, baby/And who did you turn to and find a shoulder to lay your head upon." This is a powerful and fantastic song. You feel everything she's feeling when she sings, "I can't believe you're leaving me/Stay with me, baby." I also really like Al Jackson's work on drums on this track.

"Stay With Me Baby" was written by Jerry Ragovoy and George David Weiss, and was originally recorded by Lorraine Ellison in 1966.

"Woman To Woman" is the album's most well known track, and probably still Shirley Brown's most popular song. It was a huge hit, reaching #22 on the Billboard Hot 100, and #1 on the R&B chart. But this is actually my least-favorite song on this album.

It begins with a bit of spoken word, in which she calls another woman and tells her, "You might not know who I am, but the reason I am calling you is because I was going through my old man's pockets this morning. And I just happened to find your name and number." Right then I'm a bit turned off. A suspicious woman is not my favorite choice of protagonist for a song. I just can't get on board with her. She's in love with a man, and she buys his clothes and his food and takes care of his car payments, and he is meanwhile most likely going after this other woman. It's all rather pathetic.

Written by James Banks, Eddie Marion and Henderson Thigpen, "Woman To Woman" was also included on the compilation Stax Number Ones, which was released in March of 2010.

"I Can't Give You Up" is about another troubled love. Shirley sings, "I never know where I stand/Your love is like the shifting sand." But she doesn't want him to leave, so she'll try to be the person he wants. There is some wonderful work by Marvell Thomas on piano toward the end. At that point the song is getting even better, and then it's suddenly (prematurely, to my thinking) over. "I Can't Give You Up" was written by Frederick Knight.

"I Need You Tonight"

"I Need You Tonight" is a gorgeous and sexy tune. The seemingly simple sentiment, "I need you," when repeated by Shirley Brown, is just wonderful. When she sings, "Come to me tonight," I want to go to her. You will too. This is one of the CD's best tracks.

This CD includes five bonus tracks, one of which was never before released, and three others which were never before available in the United States.

Embracing the comparisons to Aretha Franklin, Shirley does a version of "Respect" (though written by Otis Redding, it is Aretha's version that is most well known and loved). I still prefer Aretha's version. I miss the backing vocals when listening to Shirley's version. But this one is still definitely worth listening to it. Shirley gives it her all, especially in the second half of the song. I also like the guitar on this version. And approximately four minutes in, this version takes on a funky edge, which is seriously cool.

Things get even funkier with her rendition of Aretha Franklin's "Rock Steady." Oh yes, "What it is, what it is." Holy moly! This version completely kicked my ass. I feel almost like I was violated in the most delicious way. At the end, she makes references to Sly & The Family Stone, singing, "I want to take you higher," and then "I want to thank you falettinme be mice elf one more time." (Yes, she sings "one more time" rather than "again.")

This CD concludes with a nice long version of "Signed, Sealed, Delivered, I'm Yours." It's actually like two versions put together. The first is slow, with Shirley beginning with some seductive humming before going into a spoken word section. And then four and a half minutes in, a change in the drum beat and tempo announces the second version, a faster, livelier rendition.

This special re-issue of Woman To Woman is scheduled to be released on September 13, 2011 through Concord Music Group as part of their Stax Remasters series. Other titles to be released that day include The Dramatics: Whatcha See Is Whatcha Get and Rufus Thomas: Do The Funky Chicken.
Posted by Michael Doherty at 5:41 PM