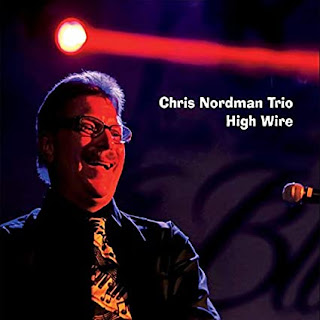 Chris Nordman is a pianist and keyboardist who has performed with a lot of artists over the years, while also leading his own group since the late 1970s. He is based in both Michigan and Florida, and performs often in both states. His latest release, High Wire, features some wonderful takes on well-known jazz, soul and pop songs. The trio is made up of Chris Nordman on piano, electric piano and organ; Ward Dumigan on upright bass and electric bass; and Joe Adcock on drums.

The album kicks off with a sweet rendition of Stevie Wonder’s “Isn’t She Lovely,” a song from Wonder’s 1976 double album Songs In The Key Of Life. Chris Nordman’s playing has a passionate and cheerful sound from the start, as he eases in. Then before you know it things begin to get really cool, with some funky touches, as the piano work becomes even freer and more fluid, and livelier. A little more than halfway through, the song comes to a momentary halt, and then eases back in with a nice lead by Ward Dumigan on bass. Before the end, Joe Adcock gets a chance to let loose on drums with a series of short solos. That’s followed by “High Wire,” the album’s title track. As with Erroll Garner’s original, it is the bass that gets this version going, and it isn’t long before things are popping in this wonderful and fun rendition. This is a piece that feels designed to give a pianist a chance to show his or her talent, and Chris Nordman does an excellent job with it.

Chris Nordman delivers a totally delicious rendition of “Mercy, Mercy, Mercy,” which had been a hit for Cannonball Adderley (and then for The Buckinghams). I particularly love the funky edge this version has. This track is one of the album’s highlights for me, in part because of its ability to sweep away our daily concerns and troubles. Plus, there is a really good and interesting lead on bass. Things really start to build from there, with Chris Nordman a total master of the keyboard, making it bend to his every desire. In addition, this track features a groovy drum solo. What more could you want? That’s followed by “Cold Duck Time,” which simply feels so damn good, like close friends gathering for a drink or two. It has that kind of smooth vibe, and there is plenty of joy in the playing. Music from a world we are eager to have exist again. That sense of joy continues with the Chris Nordman Trio’s rendition of Bobby Hebb’s “Sunny,” with Chris’ hands flying over the piano at times. I love that sense of freedom this track has. In fact, at one point I want him to go even further, to just go wild. But the other musicians deserve a chance to show their chops, and this track features a section with Ward Dumigan leading on bass, and a little later a section with Joe Adcock leading on drums, an unusual and cool part.

Chris Nordman’s rendition of Horace Silver’s “The Preacher” comes strutting in, and is kind of bouncy and totally delightful. And during that bass lead, you might want to add your own finger snaps. That’s followed by the jazz standard “Blue Bossa,” which has a fairly easygoing vibe and features some really nice work on organ. Then we get “Somewhere Over The Rainbow,” a song I’ve been hearing a lot lately. I suppose the appeal of this song has never lessened, but something about it is speaking to people especially now. Is it that we are all looking for a place where troubles vanish? Is it that we want to wake from this strange dream we’ve all been immersed in, to find that we’re at home among our loved ones? I don’t know, but Chris Nordman offers a pretty and thoughtful rendition here. The song itself seems to create the very place it speaks of, that place we’re yearning for. That’s followed by “Summertime.” I have mentioned this many times, but it is still true that you can never go wrong with Gershwin. This version of “Summertime” begins as you might expect it to, then takes on something of a Latin rhythm and vibe, and gets rather exciting, featuring some surprising touches on piano at moments.

When I find myself agreeing with the song title “Things Ain’t What They Used To Be,” I suppose I have to admit to getting older. But then again, seriously, things really aren’t what they used to be. Some of the changes are good, of course, and some of them aren’t. But good music is still good music, and this trio does a fine job with this song, finding that nice groove and then playing within it. I especially enjoy that lead on bass. Joe Adcock offers some playful touches on drums in the second half. That’s followed by a soulful rendition of Wilton Felder’s “Way Back Home” that ought to have you smiling before long. The album then wraps up with a cover of Herbie Hancock’s “Watermelon Man.” It is fun, funky and groovy, and it features some excellent work on keys, as well as an energetic drum solo in the second half. Here is when Joe Adcock really gets a chance to shine, and the results are excellent. This entire track is enjoyable, but it is the drum solo that makes it another highlight for me.

High Wire was released on CD on January 11, 2021, but was apparently made available digitally late last year.

Posted by Michael Doherty at 1:28 PM