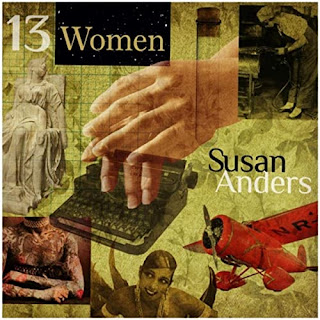 On her new album, 13 Women, singer and songwriter Susan Anders presents thirteen original songs, each one inspired by a different woman. Some of these women are certainly familiar to you, folks such as Helen Keller and Josephine Baker. But others are less well-known, and these songs might inspire you to do a little research on these women, for there are some incredible stories behind these songs. Susan Anders, in addition to providing the lead vocals, plays acoustic guitar, electric guitar, keyboard and percussion on this release. Joining her are Tom Manche on acoustic guitar, electric guitar, keyboard, bass, percussion, and backing vocals; Dave Francis on bass; Maggie Chafee on cello; Jim Hoke on clarinet, flute, harmonica and electric piano; and Mary Rodgers on accordion. There are also several backing vocalists featured on various tracks.

The album opens with “Just Give Me Everything,” a song inspired by Helen Keller, a woman who lost her sight and hearing, yet became a respected author and advocate for those with disabilities. It is also about Annie Sullivan, who taught Helen Keller to communicate. The lines that stand out for me each time I listen to this song are “There’s something out there/Past all this darkness.” That’s followed by “Spell,” about Sarah Wildes, a woman who was hanged for being a witch during the Salem witch trials. This one has a cool sound, with some interesting and powerful use of percussion, and also features some good backing vocal work by Reneé Hayes. Check out these lyrics: “How does a whole town go insane?/How does someone lie then speak my name?/How does a twist of words get me in this cold cell?/In this cold cell/You’re going to think what you’re going to think.”

Lucy Goldthorpe is one of the historical figures on this album with whom I was unfamiliar, and she is the inspiration for “Open Prairie.” She was a teacher who in the early part of the twentieth century moved to North Dakota, taking advantage of the Homestead Act, which provided a way for women to own property. There she made herself a home. “Desolation and cold I may find/But I’ve made up my mind/Yeah, North Dakota is where I’m bound/I will build a shack on my own ground/There’s a life waiting for me there, I hear it calling.” Then “You Healed Me” is a song about Henrietta Lacks and the effect she has had on the world. Henrietta Lacks is one of the women that I ended up researching. Hers is a fascinating story. She unwittingly provided cells for medical research, which are still used to this day. This song is different from the previous tracks, in that its story is not told from the perspective of the woman herself, but from a person who was helped by what she gave. “We never met/Never passed on the street/But you healed me/You healed me.” This track features some really nice work by Jim Hoke on harmonica.

I love the opening line of “Castles,” “I am a failed debutante,” a line that makes me smile each time I listen to this disc. This song is inspired by Julia Morgan, the first licensed female architect in California. Like everyone who visits it, I was astonished by Hearst Castle. It is by far the most impressive structure I’ve ever been inside, and it was one of the buildings designed by Julia Morgan. The song’s title alludes to that place. “Mosaic pools, marble stairs/Sculpted arches everywhere/Let me keep working and I’m fulfilled/I got castles on my mind and they’re going to get built.” Jim Hoke delivers some wonderful work on clarinet on this track. Susan Anders then gives a sweeter sound to “My Life In The Stars,” a song about a female astronomer named Henrietta Swan Leavitt who contributed considerably to the field. There is a crater on the moon named after her. “And how that brightness shifts with time/And how luminous and variable they are/Just like my life in the stars.”

“Girl You Never Knew” isn’t about a specific woman, but about a representation of the working women during World War II, Rosie the Riveter. And it’s about how being an important part of the workforce changed women, and how not all of them were eager to revert to their previous lives once the war was at an end. Check out these lines: “You’re out there fighting like it’s 1943/That world is gone now – it’s changing more each week/I love you, but I am not who I used to be/I pay the bills, I patch the roof, I fix the car.” I seriously dig the cool vibe of this track. This is one of my personal favorites. That’s followed by another song related to World War II, “Witness,” which is about Martha Gellhorn, a respected war correspondent who was the only woman to land at Normandy on D-Day. Her career continued long after that, and she published several books, in addition to covering many important events. “If I cannot fix this, fix this/I will be their/Witness, witness/I’ll let no one miss this, miss this/I will never quit this, quit this/I will be their witness.” “A Little More From Josephine” also touches upon World War II, for Josephine Baker, in addition to being a singer, dancer and civil rights activist, was a spy for the French Resistance. “You’re hypnotized, forgetting that I’ve got ears/You watch my boobies bounce and your brain disappears/I can take you down with one wild swing of my leg up to the balcony/And ooh wee/I will steal your secrets while you are begging for/A little more from Josephine.” This track has an appropriately jazzy vibe, and I particularly love that clarinet.

Maud Stevens Wagner, the source of inspiration for “Under Your Skin,” is another woman I hadn’t heard of. She was the first known female tattoo artist in the U.S. I’m not a fan of tattoos, which might be why I wasn’t familiar with her name, but there is something kind of magical about this song. “Under Your Skin” is followed by “Wave That Rocks Me,” a song inspired by Edmonia Lewis. Hers is a name I feel I should have known, and thanks to this song, I am learning about this sculptor who overcame all sorts of hardships and prejudice. “My life will be my own/I’ll carve it out of stone/I’ll make a work of art.” This song, which features some good percussion, was written by Susan Anders and Renee Hayes. Then “Walk This Freedom” is about Mildred Lisette Norman, a peace activist who adopted the name Peace Pilgrim and walked around the country for nearly three decades, promoting peace. The album concludes with a song inspired by Amelia Earhart, “What A Woman Can Do,” which includes these excellent and memorable lines: “I’m scared, but I’m cocky/So just you watch me/Sailing up over the blue/I’m wild, but I’m careful/I’m courting angels/I’ll do what a woman can do.”