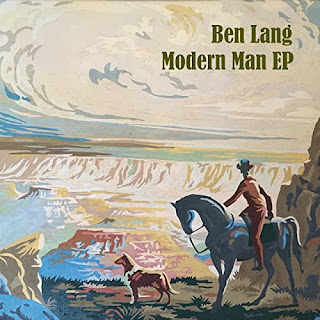 Ben Lang is a singer and songwriter based in San Rafael, California. You might know him from his work in the band Biv And The Mnemonics. Late last year he released his debut solo CD, an EP titled Modern Man EP, featuring mostly original material. And this is truly a solo release, with Ben Lang providing the vocals and playing all the instruments.  The music is folk, sort of, though at times more in line with, say, the early Violent Femmes sound, and with some country elements too.

The disc opens with “Houston-New Orleans,” which came to me as a delightful surprise the first time I popped this disc in. Something about this song had me smiling almost immediately. It has a friendly sort of atmosphere, a hopeful sound, even as he sings about hitchhiking in the rain and whisky washing away his pain. “I was dreaming of the morning when I left my ma and pa/I was just another dreamer who’s been dreaming all along/I only want an open fire on a cloudy summer night out on the range.” That’s followed by the EP’s title track, “Modern Man,” in which he sings, “I will be your modern man.” And the song mentions things like charging phones and chatting online. It’s kind of funny, coming as it does after a song about wanting to live out on the range. And of course the album’s artwork seems to be in wonderful contrast with its title. Anyway, this song is folk, sure, but in the way Lou Reed might have approached it. “And we’re all doing the best that we can.”

As “Modern Man” is ending, we hear Ben say, “I might have nailed it.” Interestingly, that track is followed by a song called “Nailin’ It.” The line from this one that first stood out for me is “I’ve got my alibi, my hands are clean.” That line gets me to thinking about what he might have done. But, you know, there is something wonderfully sweet about the sound of this track. And, hell, if he’s not innocent, he’s innocent enough. “Victory this time is guaranteed.” Maybe, maybe, but you’ll find yourself rooting for him, no question. Then “Hollow Spaces” is rather beautiful right from the start, and there is something hopeful and oddly comforting in the line “To fill the space where you were hollow.” This is a surprisingly striking song. Then “Tee Off With Your Head” kicks in with a good deal of joy and energy to match its playful title. “Sit out back/You know, it’s time to relax/‘Cause we’re only getting old.” It sounds like a folk party. It’s kind of impressive that Ben Lang is playing all the instruments here, because it feels like a fun little folk jam. The EP concludes with “Mr. Moon,” the only song on it not written by Ben Lang. This is a short, adorable sing-along song.

Posted by Michael Doherty at 11:38 AM