The country seems to be moving forward to a more compassionate and sane existence, though clearly without the help of Republicans, who remain tied to that mendacious and soulless sociopath. As we hope to reach a place where we can actually reach out to each other again, musicians continue to put out excellent albums, some of which address our social concerns. Here are some notes on a few new jazz releases you might be interested in. 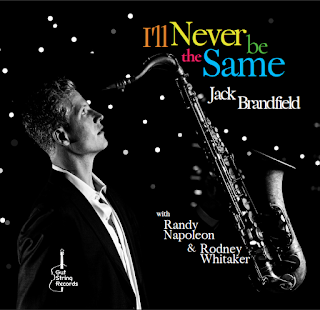 Jack Brandfield: “I’ll Never Be The Same” – Saxophonist Jack Brandfield’s debut album, I’ll Never Be The Same, contains mostly standards, along with one original composition. The tunes chosen are delivered with love and joy by the fantastic trio of Jack Brandfield on tenor saxophone, Randy Napoleon on guitar, and Rodney Whitaker on bass. The album opens with a sweet and romantic rendition of Jerome Kern’s “Nobody Else But Me,” Jack Brandfield’s saxophone singing merrily and warmly. Halfway through there is a vibrant guitar lead, followed by a strong lead on bass. The trio then delivers a delightful rendition of Hank Jones’ “Vignette,” the pleasant work on saxophone at the beginning immediately lifting my spirits. The album’s sole original composition is “Where Leaves Change,” a beautiful piece that has a nostalgic and wistful quality. People here in Los Angeles sometimes say they miss the seasons, and indeed there is something undeniably wonderful about autumn in New England, something romantic about it, that tugs at our hearts. This track captures some of that sensation, some of that warmth. There is a timeless vibe about it, as with the best of the standards. And speaking of that, Jack Brandfield follows his original tune with a rendition of “Lover Come Back To Me” that begins tenderly and gently, then picks up in energy and becomes a joyful number. “I’ll Never Be The Same,” the album’s title track, also has a charming warmth. There is something friendly and endearing about these tracks, particularly on something like “On A Slow Boat To China,” which features some excellent work on guitar. Randy Napoleon sits out “Do Nothing Till You Hear From Me” so the track focuses on Rodney Whitaker’s work on bass, including a good solo, and the way the bass interacts with the saxophone. Then “Over The Rainbow” features just Jack Brandfield and Randy Napoleon, this pretty rendition beginning with a guitar solo and including a saxophone solo near the end. This album is scheduled to be released on April 2, 2021. 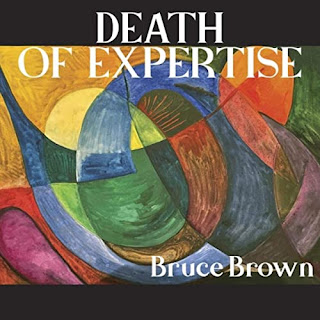 Bruce Brown: “Death Of Expertise” – The title track, which opens vocalist Bruce Brown’s new album, does a perfect job of immediately setting the tone. The song gently swings, and also has a good sense of humor, addressing an amusing and somewhat dangerous aspect of our current culture, its first lines being “I pulled my own teeth out/I replaced my own hips/Just me and Dr. Google/Dishing out some safety tips/Here’s to the death of expertise.” Interestingly, Bruce Brown delivers it in a straightforward manner, without a hint of sarcasm, which makes it all the more effective. It is an original composition, as are all the tracks on this release. “They’re Everywhere” addresses, in a gentle manner and bossa nova style, sexual harassment: “Time’s up, so guys beware/That slightly off remark that led to your excitement/Is now the spark that leads to your indictment.” I like that it also addresses the related subject of the proliferation of cameras and surveillance.  And I love that lead on saxophone. The musicians backing Bruce Brown on this disc are John Harkins on piano, Brendan Clarke on bass, Andrew Dickeson on drums, Steve Brien on guitar, Steve Crum on trumpet, and Glen Berger on saxophone and alto flute. Some of these songs are about different aspects of love. Check out these lines from “Love Makes Us Who We Are”: “But there’s a space in my heart/In the shape of you/No one could ever replace.” That track also features some sweet and pretty work on piano. And in “Love Always Wins,” which was co-written by Roger Frankham, Bruce sings, “With every glorious day that begins/Love always wins.” I appreciate that optimism. “Back In The Day” is a fun number that tackles some of the recent and not-quite-welcome changes we have all been dealing with. I especially like these lines: “Back in the day you hit the road on a bike/You didn’t sit around and hit ‘Like’/And friends were people you actually knew, the way I remember it/Back in the day a phone was up on a wall/When someone gave you a call back then/The conversation wasn’t blasted on full display.” Ah yes. What has happened to us? That track is followed by “Doreen,” which had me laughing out loud several times. The disc concludes with a thoughtful and tender love song, “The Music Plays Again.” “Every heart hears the music that sings to it/And my heart hears the beauty in yours/However far away you are/However long it’s been/I just think of you and the music plays again.” Beautiful. This album is scheduled to be released on CD on February 26, 2021.(It was apparently released digitally last year.) 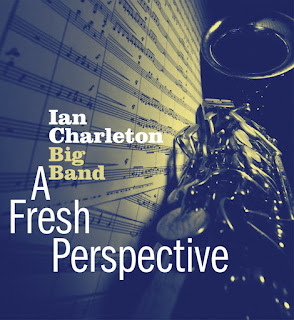 Ian Charleton Big Band: “A Fresh Perspective” – The new release from Ian Charleton Big Band features a good mix of original compositions and beloved standards. It opens with a few original numbers, beginning with “West 67th Street,” which features some wonderful work by Bart Kuebler on piano and a delicious bass line by Ryan Persaud. It has a lively, breezy vibe, and then the horns come in with a bright burst. Then “Sunday Morning” has a more relaxed vibe at its start, fitting with its title. It creates a pleasant atmosphere, one in which we just want to reside for as long as possible. Bart Kuebler again shines on piano, and this track also features a cool bass solo. That’s followed by “A Fresh Perspective,” the album’s title track, which has a strong sense of movement, and highlights the work of Richard Garcia on soprano saxophone and Kerry Moffit on flugelhorn. I love the way this track builds and grows and breathes. And there is a delicious drum solo by Bob Habib in the second half. We then get into the standards with a fun rendition of Richard Rodgers and Lorenz Hart’s “Everything I’ve Got” (often written as “Ev’rything I’ve Got”), featuring Emily Charleton (Ian’s wife) on vocals. Emily’s delivery contains plenty of joy and attitude as she sings lines like “I’m not yours for better, but for worse.” She also joins the group on vocals for an interesting and enjoyable rendition of Irving Berlin’s “Blue Skies.” That’s followed by a fresh take on “Tea For Two,” the song slowed down a bit, featuring some romantic piano work and a good lead on trumpet. The album concludes with its fourth original composition, “Party On Park,” a cheerful number featuring a good groove and a wonderful lead by David Fatek on baritone saxophone. It’s interesting that two of the four original tracks are named after streets in New York. This album is scheduled to be released on March 16, 2021. 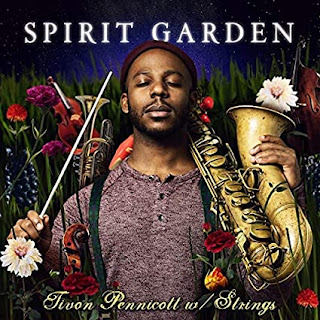 Tivon Pennicott: “Spirit Garden” – These are difficult times, no question. And Tivon Pennicott’s new album provides an otherworldly sojourn, inviting us to step into a different reality. The presence of an orchestral string section greatly contributes to this sense, right from the album’s first track, “Spring Storm,” which has a strangely peaceful, yet dark quality, as if the storm has completely taken over the landscape yet presents no personal danger. And that work on saxophone is gorgeous and captivating. Then “Fermented Grapes” brings us back to a more normal state, the saxophone having a more relaxed vibe. Philip Dizack’s trumpet blends beautifully with Tivon’s sax, and I dig Yasushi Nakamura’s work on bass. I like the way things start to feel loose, particularly with that cool work by Joe Saylor on drums. Interestingly, when the tune feels like it has reached its conclusion, the strings come in, at first presenting a somber tone, then suddenly swelling, carrying us up with the sound. In “Celery Juice,” a good groove is established, and then the strings begin to rise from that groove, and take over at the end. “Shameless Shame” seems to move in the opposite direction, beginning with some intriguing work on strings, then suddenly giving way to the horns, and soon things begin to cook, propelled by that great work on bass. Then there is something sweet and beautiful about “Galatians Five Twenty Two.” I had to look it up, but the passage indicated reads, “But the fruit of the Spirit is love, joy, peace, forbearance, kindness, goodness, faithfulness.” And this track seems to take us there, particularly at the very end. And the joy of “Jump For Joy” is nearly palpable, though it is a relatively calm, gentle sort of joy. There is something playful at times about the pretty “Rain Dance.” It leads right into “If I May Say So Myself,” which has a cool vibe from its start and moves at its own pace. No need to hurry. The album concludes with a short piece on strings titled “Thank You Note.” This album was released on December 30, 2020. 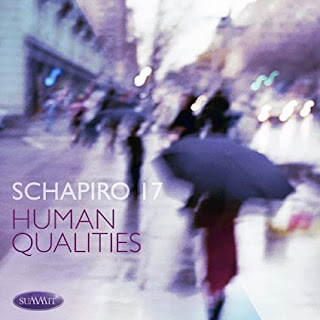 Schapiro 17: “Human Qualities” – Named because there are seventeen band members (in the same way The 14 Jazz Orchestra is named for having fourteen members), Schapiro 17  is a big band based in New York. Human Qualities is the group’s second release, this one consisting of almost entirely original material composed by Jon Schapiro. Its opening track, “Count Me Out,” has a classic sound and vibe at the start, taking us to a different era, or perhaps bringing that era forward to us, and that saxophone lead is totally delicious. There are some interesting, unexpected valleys and turns to this track as well. Then things get sexy at the beginning of the simply named “Tango,” a tune that moves at times with grace, at times with a cool, kind of sly attitude, and then with a surprising excitement. “Hmmm” gets going with a good rhythm, and things start swinging and popping, and – yeah – life is pretty good. I love the way that work on piano feels like it’s holding everything together, keeping it grounded yet moving. The album’s title track tells an engaging tale, creating a vivid atmosphere and taking us down its streets and through its alleys. That’s followed by “Hallelujah,” which has a haunting and compelling quality. “A Bounce In Her Step” is a brighter number, with some cool work on bass. Then “House Money” surprisingly has something of a Bo Diddley rhythm happening, and is a fun track. The album’s only cover is an unusual rendition of Ewan MacColl’s “The First Time Ever I Saw Your Face.” There is an unexpected element of intrigue to this track, and yet it works. This album is scheduled to be released on March 12, 2021.
Posted by Michael Doherty at 10:23 AM