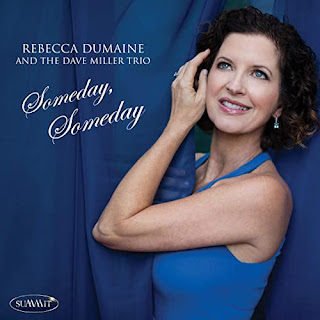 There is a line from the Steve Owen song “Longing To Be” that has always stuck with me: “It’s a different kind of cursing, but someday is the dirtiest word.” A great line, right? The other song that comes to mind when I hear the word someday is, of course, Creedence Clearwater Revival’s “Someday Never Comes,” in which a child learns the disappointments and confusions of life. And yet, for me there is still something hopeful in the word, even if deep down inside we know it will never happen. It is like obstinately hopeful. All of that went through my mind as I first put on Someday, Someday, the new album from Rebecca DuMaine And The Dave Miller Trio. And there is something hopeful and cheerful about the music on this album, even when Rebecca is singing of lost love. The songs chosen for this release are mostly standards, but there are also a couple of original compositions written in the last year during the time of isolation and darkness.

I first listened to this disc at the end of a rather long day at work, when I was not in the best of moods. After like fifteen seconds of the first track, “Just Friends,” all of the little things that annoyed me during the day seemed to just disappear.  Rebecca DuMaine’s voice is friendly and bright and wonderful, and there is some completely delicious work by Dave Miller on piano. And though this is a song about a love that is no longer (with lines like “Two friends drifting apart/Two friends, one broken heart”), I find it rather uplifting. It might be due in part to Bill Belasco’s work on drums, which keeps things moving forward in a light and spirited way. That’s followed by Gilbert O’ Sullivan’s “Alone Again (Naturally),” another song about someone who has suddenly lost love, and in this case is contemplating suicide in the first verse. It had been quite a while since I had thought about this song. I heard it a lot while growing up, and then it sort of disappeared from my life. This version by Rebecca DuMaine is beautiful. It begins gently, her voice supported by Dave Miller on piano. Then on the lines “To think that only yesterday/I was cheerful, bright and gay,” the others join in, an interesting choice, for this rendition at that moment begins to sound a bit more cheerful, bright and gay. It is like we are moving into the past with her. This is such a depressing set of lyrics, but there is a sweetness to this version that keeps us from giving in to despair.

What is it about the French language that makes it so beautiful and sexy? I don’t know, but Rebecca DuMaine sounds fantastic singing in French on “Samba de Mon Coeur Qui Bat,” a song written by Benjamin Biolay and recorded by Coralie Clément. This has a classic, timeless vibe, but is actually a fairly recent song, Coralie Clément’s version having come out in 2001. I love Dave Miller’s work on piano on this new rendition. That is followed by “The Gentleman Is A Dope,” a song written by Richard Rodgers and Oscar Hammerstein II for the musical Allegro. It’s a fun tune, particularly the way Rebecca DuMaine delivers it. She totally sells it, becoming the character. Seriously, her voice takes on a different tone, a different quality here. It’s an excellent performance.

“Someday, Someday,” the album’s title track, is an original number by Rebecca DuMaine, addressing this crazy time when concerts and other social activities have been put on hold because of the pandemic. “Dreaming of a life I had just yesterday/How I long to be/Where my heart was wild and free/Now I sit inside.” Though it is about a longing for a return to that life, this song is a lively, exciting number that moves at a good pace, giving us a sense that that life is still present. This track features some excellent drumming, that great rhythm seeming to take over in the second half for a time. Rebecca DuMaine sings this one with a sense of urgency. “How I long to see/Happy faces smile at me.” That is followed by “Both Sides Now,” my favorite Joni Mitchell song (which was originally listed as “Both Sides, Now”). Her recording of it from Clouds often makes me cry. Rebecca DuMaine offers a personal take on it, this version having a sort of magical sense about it. It is more positive, as if accepting, even embracing, the different things that life throws at us. Then we get the other original composition by Rebecca DuMaine, “Time To Get Unstuck (Happy Little New Song).” This is a delight from the very beginning, the way it inserts that little pause, which works well with the song’s idea of getting unstuck. You feel maybe it happens in that precise moment. This track features a lead on piano that is kind of adorable. Plus, I seriously dig Chuck Bennett’s work on bass. “It’s easy to neglect the simple stuff, baby/Dismiss the magic moments that appear every day/When being in the present seems too much, darling/Don’t shut your ears and eyes and run away.” Ah, we can all relate to the idea of the present seeming to be too much, can’t we? This is a positive, uplifting number, and for me another of the disc’s highlights.

Rebecca DuMaine’s rendition of “As Long I Live” is absolutely wonderful. I love her playful delivery. And that work on piano is equally playful and enjoyable. If this track doesn’t cause you to smile, you may in fact already be dead (and it’s freaking me out a bit that you’re reading this). “Maybe I can’t live to love you as long as I want to/Life isn’t long enough, baby/But I can love you as long as I live.” That’s followed by “On A Clear Day,” which has a pleasant vibe, in large part because of Dave Miller’s work on piano. Then “I Guess I’ll Have To Change My Plan” is a kind of silly and light song, and these musicians get into the spirit of the thing, particularly after it kicks in.

Whenever I hear a cover of “Cry Me A River,” it takes me a few moments to push the Joe Cocker version out of my head so that I can appreciate it on its own merits, without trying to compare it to that one. But this version by Rebecca DuMaine and the Dave Miller Trio immediately sets itself apart by adding a nod to Dave Brubeck’s “Take Five” at the beginning. This is a lively rendition, and the instrumental section halfway through gets exciting. Check out that percussion!  And there is a cool lead on bass. “La Vie En Rose” is a song that always makes me happy, and Rebecca DuMaine delivers an excellent version, combining it with Charlie Parker’s “Au Privave,” which works quite well. Rebecca’s voice is totally gorgeous. Ah, that French! That’s followed by a cheerful, joyful rendition of “Wrap Your Troubles In Dreams.” “Just wrap your troubles in dreams/And dream your troubles away.” Yes, seems like good advice. This is an optimistic number, something we can certainly use, and it features another good, and rather peppy, lead on bass. Toward the end of this song is the line “Just remember that sunshine always follows the rain.” And Rebecca DuMaine chooses to follow that thought with “Sunny,” its first line being “Sunny, yesterday my life was filled with rain.” This is a bright, cheerful rendition, with a good groove. The more I listen to this version, the more I realize just how excellent it is. And that is how this album closes.

Someday, Someday is scheduled to be released on March 12, 2021 on Summit Records.

Posted by Michael Doherty at 6:35 PM