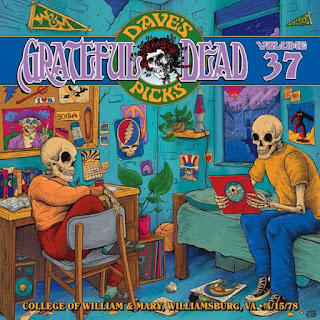 The first extensive series of Grateful Dead concert recordings, titled Dick’s Picks, lasted long enough to include thirty-six volumes. With the new volume in the Dave’s Picks series, Volume 37, that number has been surpassed, a milestone, to be sure. And to mark the occasion, Dave Lemieux has chosen an excellent show from the spring of 1978. Dave’s Picks Volume 37 contains the complete show the Grateful Dead performed on April 15, 1978 at College Of William & Mary in Williamsburg, Virginia, along with a good chunk of the show from April 18th in Pittsburgh, Pennsylvania.

The first disc contains the first set, as well as the first three songs of the second set. The band kicks off the show with “Mississippi Half-Step Uptown Toodeloo.” It is an energetic rendition right out of the gate, though Jerry Garcia’s microphone takes a moment to function. That is soon fixed, and the band is cooking. Listen to Jerry belt out “On my way” just before the jam. Yeah, this is a pretty damn good version of “Mississippi Half-Step.” It just never falters, and its peaks are high ones. The crowd must have known they were in for a good show just by the band’s playing on this first song. The band follows “Half-Step” with “Passenger,” Bob Weir and Donna Jean Godchaux’s vocals sounding good together here, as they keep the energy high, Bill Kreutzmann and Mickey Hart driving everything forward and onward. Things then slow down for a sweet, gentle rendition of “Friend Of The Devil.” This version has such a pleasant vibe about it, I find my face hurting from smiling continuously through it. The jam is rather pretty too. This is a version to make you feel good, no question about it. They follow that with a version of “El Paso” that builds as it goes, and then an excellent “Brown-Eyed Women” that has a bit of a bounce to it at times. This is a pretty joyous set. “Brown-Eyed Women” finishes gently, and Bobby then leads the group into “Let It Grow,” and before he even begins the lyrics, we get some really nice work by Jerry on guitar, which seems to signal this is going to be something special. And indeed, it is. Holy moly, Jerry lets it rip a few minutes in, and it seems nothing can go wrong now. The band is really going for it here, resulting in one of the best versions of this song I’ve heard. The first set concludes with “Deal.” “Deal” is a fun song, but was rarely one to get me overly excited. That being said, this is a spectacular rendition, particularly as it gets close to the end, the band repeating “Don’t you let that deal go down.”

That is how the first set ends, but there is still more music on this first disc. The band opens the second set with the always-fun “Bertha,” and this rendition has all the energy you’d want from the song, and it leads directly into “Good Lovin’,” which feels like a great party itself, and is guaranteed to get you dancing around in your home. The band is clearly having a blast. But we have to save some energy for later, so Jerry follows that with an absolutely wonderful, soulful version of “Candyman” that gets to some nice, quiet spots, then rises at just the right moments. A masterful performance by Jerry. And that wraps up the first disc.

When I was starting to seriously dig into the Grateful Dead’s catalogue in my mid-teens, I found myself playing  “Sunrise” and “Terrapin Station” off of the Terrapin LP a lot, particularly at night with just a strobe light or a few candles lit in my room. It was a great way to reach another place, just the other side of the curtain, you know. Well, this disc begins with Donna delivering a really good version of “Sunrise.” So good to hear this one again. Here it does not lead into “Terrapin,” but rather “Playing In The Band,” and the guys are obviously eager to tear into it, to get it off to a powerful start. And, yes, this one, though a bit awkward at moments early on, really cooks. Then after a few minutes, they get into more interesting territory, that space that most of us were seeking each time we saw the band play. Isn’t it great when they get us there? And then they seem determined to push on right through that space to see what is beyond it, always curious about what is around the next bend, what is visible past the next star. This is a powerful version. Then at the end it drifts off, and interestingly goes into “Rhythm Devils,” never coming back into the main body of the song, so no scream from Donna. It has been explained why this track is labeled “Rhythm Devils” rather than “Drums,” but for those who might be unaware, during this tour, this segment of the show wasn’t just performed by Bill and Mickey, but sometimes by the entire band. It’s a whole big percussion jam, something you might think to find winding its way through the French Quarter in New Orleans. Must have been something to be present to witness that (there’s a photo on the back of the liner notes booklet to give you an idea). That leads into “Not Fade Away,” the drummers first establishing the beat. It begins a bit slowly, but after a few minutes, when they get into the lyrics, the song definitely grows in energy. This is an unusual “Not Fade Away,” the jam going into some stranger territory. And from there the band slides beautifully into “Morning Dew,” the crowd going wild when they hear those first notes. This was the only time the band played this song in 1978, and it’s an excellent version, Jerry’s voice sounding soulful, mournful, even delicate at times. And then his guitar tears into your heart. What a glorious rendition, certainly one of the best, and a highlight of this show. Just fantastic. Bob then ends the second set with “Around And Around.” The encore is “One More Saturday Night.” It was a Saturday, after all.

The second disc then concludes with the final two songs of the first set from April 18, 1978 – “Lazy Lightning” into “Supplication.” Those songs were included on the 1976 self-titled Kingfish album. Bob Weir was a member of that band during the time the Dead was on hiatus, and these two songs found their way into the Dead’s rotation, played somewhat regularly in the late 1970s and early 1980s. I saw the band play “Supplication” at Shoreline in the 1990s, but by then “Lazy Lightning” was long gone.

The third disc contains more music from the show on April 18, 1978, beginning with a couple of songs from the first set – “Sugaree” and “Tennessee Jed.” “Sugaree” was the second song of the set, and it’s a good version, particularly Jerry’s guitar work. Then “Tennessee Jed” was played just before “Lazy Lightning.” I always love hearing this one, and this version has some delightful touches and a good deal of power behind it. And it seems to just get better and better as it goes, ending up being a fairly remarkable rendition before it ends.

The rest of the disc is almost the entire second set. In fact, all that is missing is the complete “Drums” segment. This disc contains a minute of it, just a little tease, enough to work as a transition between songs. As much as I love those versions of “Sugaree” and “Tennessee Jed,” I might prefer to just have the complete second set. Anyway, the second set opens with “Scarlet Begonias,” always a great song to kick off a set. Some minor flubs early on do not much mar this fun version, and I like the loose jam at the end, with the carefree vocal work by Donna. It does not lead into “Fire On The Mountain” this time, but instead the band goes into “Dancing In The Street,” with a beat designed to get you moving. This version is all about the groove, and at the end there is a section of just vocals and drums, and that leads to a bit of “Rhythm Devils,” just over a minute of it. It seems we get the very beginning of it, and the very end of it, as the drummers lead the group into “Samson And Delilah.” After a brief pause, the band eases into a beautiful rendition of “Terrapin Station.” Inspiration, indeed! This version is as close to perfect as any I’ve heard, except for one wildly off note toward the end. The set concludes with “Around And Around,” which begins softly, then kicks in, and by the end is a fiery, rocking rendition.

Posted by Michael Doherty at 6:27 PM