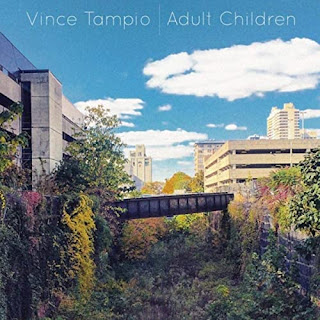 Vince Tampio is a trumpet player and composer based in Philadelphia. His new album, Adult Children, features all original music, a great fusion style with some strong percussion. The last four years have really brought out the very worst in people, to the point where we wonder if certain people even belong to the same species as us, and the music on this disc seems to reflect some of those personalities that we’ve come to know, though does so with a certain sense of humor, apparent even in the titles chosen for the tracks. Vince Tampio, in addition to trumpet, plays guitar and bass on this album. He is joined by Drew Parker on guitar, Joe Heider on guitar, Ben Basile on bass, Corey Mark on percussion, Alec Meltzer on percussion, and Ben Diamond on percussion.

The album begins with “Career Cheerleader.” I love how this track, and thus album, opens with a burst. There is a strange excitement to this music. You get the sense of things in motion, perhaps a busy life. This track features a whole lot of excellent percussion, and a rhythm that at times feels insistent, particularly in that great bass line. But it is Vince Tampio’s work that is at the center here, that is the voice of the piece. Interestingly, it ends with a bit of laughter, dispelling, or releasing us from, the energy and tension of the track. That’s followed by “The Tontin,” which has kind of a dark vibe at first, with progressive rock elements. Is there something angry in the sound at moments? At one point, the trumpet and guitar engage in a conversation while the rhythm is maintained below, that being my favorite section of the track. Then “Soul Food Buddhist” begins with a beat, and when the bass is added, the tune takes on a cool, funky vibe. The groove is steady, even relentless, so that it eventually becomes our rhythm too. The trumpet then slides in and rises over that, at times taking us to higher places, while that groove keeps us grounded. It’s almost mesmerizing, the way that groove works. There is a bit of laughter at the end of this track.

The bass then leads us into “Smug Fit,” a playful title, and one that likely conjures images of several people in the current political realm. The person with whom I most strongly associate the word “smug” is Moscow Mitch McConnell (whenever I see that smug expression on his face, I want to break his nose). There is an intense element to this track which it is easy to get caught up in, and more excellent percussion, but it is Vince Tampio’s wonderful work on trumpet that makes this one of my personal favorites, creating a theme that works its way inside you. That’s followed by “Vapid Transit,” another playful title, which I appreciate, this one having a sharp, fierce sound at the start, kind of unnerving us. But then it quickly takes on some funky elements. There is certainly nothing dull about this music. This track seems to warn of possible danger all around us. Of course, there is danger is using rapid transit in these days of the pandemic.

The mood lightens a bit then with “Tangled Bitties,” with its good groove to get you moving, and some interesting guitar work. A few minutes into the track, thing go in a different direction, creating an eerie atmosphere, like waves crashing on a dark shore. But we are soon back into the main groove again. That’s followed by “Cardinal Rule,” a fun one right from the start. Ah, perhaps the cardinal rule here is to enjoy ourselves, and let everything else follow from that directive. The percussion is king here, but also with some excellent touches on guitar. And they pick up the pace for a moment toward the end, leading to a shout of “You broke the cardinal rule.” After that, the trumpet really sings. The disc then concludes with “Blow Our Minds,” which begins with the remark “Blow our minds, Corey,” perhaps reminding the drummer of which tune they were doing, but more likely a direction, which is met with laughter. And this track does feature some interesting percussion, the kind of percussion that creates a landscape and brings us into it. In fact, it is more than three minutes before the rest of the band comes in. And then things get groovy, the trumpet seeming to welcome us, like now that we’re in this land, we’re being met by its people, even embraced.

Posted by Michael Doherty at 1:25 PM