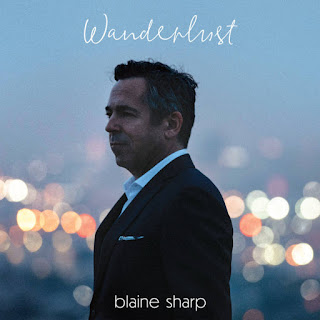 Blaine Sharp is a vocalist and songwriter born in Canada and now based in Los Angeles. His debut release, last year’s Wanderlust, features mostly standards, along with a couple of original compositions. His vocals have warmth, a romantic element, as well as a bright quality, and it all sounds perfectly natural, as if singing were his normal method of communicating. Joining the singer on this album are Mike Bolger on accordion, Alex Frank on bass, Mitchell Long on guitar, Allen Mezquida on saxophone, Robert Perkins on drums, Nolan Shaheed on trumpet, Peter Smith on piano, and James Yoshizawa on percussion.

The album opens with its title track, “Wanderlust,” an original song written by Blaine Sharp and Peter Smith, who also produced the album together. This song has a sweet and gentle vibe. Those of us who have wanderlust haven’t been able to follow our muse or spirit much this year, what with the pandemic and all, but we can take a break from the world’s troubles, at least in our minds, as we enjoy this song. “Dreaming of us no longer apart/An ocean of time/Until with you I’m/Chasing the wave of this vagabond heart.” And I love those touches on saxophone. That’s followed by a cover of “Lullaby Of Birdland,” a song written by George Shearing and George Davis Weiss, and recorded by folks like Ella Fitzgerald, Sarah Vaughan, and Mel Tormé.  Blaine Sharp gives the song a cool Latin rhythm, and delivers a smooth vocal performance. This track features some pretty work on piano and a wonderful lead on trumpet.

“Summer Wind” is a song that was originally written in German by Hans Bradtke and Heinz Meier (or Mayer, as it was sometimes spelled), then had English lyrics written by Johnny Mercer. Now Blaine Sharp writes French lyrics for it, and the song sounds even more romantic. Ah, French has that effect, does it not? Listening to this track, I want to stroll along the Champs-Élysées with my girlfriend. There is some nice work on accordion and piano, helping to transport us away from our cares. This song provides the sort of escape we all want. And speaking of escape, Blaine Sharp delivers a beautiful rendition of “You Belong To Me,” a song that mentions several far-away places. “See the market place in old Algiers/Send me photographs and souvenirs/But remember when a dream appears/You belong to me.” As this rendition goes on, it begins to develop something of an island vibe. Then Alex Frank provides some excellent work on bass to accompany Blaine’s vocals at the beginning of “On A Slow Boat To China.” This is a fantastic rendition, featuring some excellent playing from all the musicians. I particularly love what Peter Smith does on piano, and how the piano and drums work together. Then that lead on guitar is delicious. I wish it went on a little longer. This is my personal favorite track.

There is something both sweet and magical about Blaine Sharp’s approach to “A Journey To A Star,” a song written by Harry Warren and Leo Robin, and recorded by Judy Garland in the 1940s. I just want to drift away on this one. Then halfway through, it takes a different tone, starting to swing, bringing us back to earth, to a jazz club where we are all flawless dancers, sweeping our partners off their feet. This track also features another delightful lead on guitar. This album began with one of its two original compositions, and it concludes with the other, “Road To Nowhere,” also written by Blaine Sharp and Peter Smith. This is a sweet, romantic number, sounding almost like a lullaby. “With you there/With you here/Take me far/Take me near/With miles to spare/And dreams to share/On a road to nowhere.”

Posted by Michael Doherty at 11:34 AM