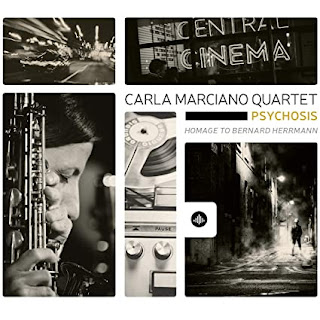 Bernard Herrmann composed some memorable and fantastic film scores, and is known especially for his work with Alfred Hitchcock. He wrote music for Psycho, Vertigo, North By Northwest, The Trouble With Harry, Marnie and The Man Who Knew Too Much (that is, Hitchcock’s second film with the title The Man Who Knew Too Much). He of course wasn’t limited to working with just that director, and also composed music for such films as Taxi Driver, The Day The Earth Stood Still, Twisted Nerve and Citizen Kane. Carla Marciano Quartet pays tribute to Bernard Herrmann’s talent as a composer on the new release, Psychosis: Homage To Bernard Herrmann. The quartet is made up of Carla Marciano on alto saxophone and soprano saxophone, Alessandro La Corte on piano and keyboards, Aldo Vigorito on double bass, and Gaetano Fasano on drums.

The disc opens with a piece from Taxi Driver, “Betsy’s Theme,” the saxophone acting as a lonely voice in the night, crying out in a dark city, and though it is likely that other people hear, it is not likely they will respond. This is a beautiful and sad track, and it takes an interesting turn approximately six minutes in, with the addition of that strong, dark pulse on drums. We then get into the Hitchcock territory with the “Prelude” from Marnie, Hitchcock’s 1964 film starring Sean Connery and Tippi Hedren. This is an exciting and dramatic piece. I am drawn particularly to that work on piano approximately five minutes in, and love that wild, sort of unhinged percussion beneath it. This music feels like it can create suspense in our own lives, whatever it is we might be doing while listening. And then that intense work on saxophone seems ready to drive us right to the edge, and with a sense of urgency, commanding our attention. That leads directly into “From ‘Marnie’ To ‘Twisted Nerve,’” a connecting piece composed by Carla Marciano, and featuring more unrestrained and exciting work from her on saxophone. In the second half, the music begins to mellow and develop into a more haunting theme, with allusions to Twisted Nerve, before relaxing into nothingness. Then the Carla Marciano Quartet ventures into the theme from Twisted Nerve. Twisted Nerve is a movie I have long wanted to see and somehow still not managed to catch. Its plot sounds great. The theme here begins with an intense energy on saxophone. And, hey, even if, like me, you haven’t seen the movie, this music will be familiar to you, because Tarantino used a variation of this in Kill Bill: Volume 1, that piece that everyone was whistling at work for like three years afterward. Things relax a bit after a minute or so, leading into a cool lead on bass. But it’s not long before this track is again growing in intensity, that saxophone tearing holes in whatever fabric holds reality together before the end. This is a phenomenal track. You might need a breather when it’s over.

Usually when someone plays music from Psycho, that person begins straight off with that one familiar theme. It has been included on Halloween and horror music compilations. Carla Marciano Quartet does something a little different here, beginning with an introduction on piano. Then a couple of minutes in, we do get that theme, one of Bernard Herrmann’s most recognizable pieces. This is a seriously cool take on it, a different approach than what I’d heard before. I love what these guys do with this piece, especially Carla Marciano’s work on saxophone, her instrument as unhinged as Norman Bates ever was. And there is a surprising drum solo in the second half, which I love. That is followed by a wonderfully eerie take on the prelude from Vertigo, the first of two pieces of music from that film. This track includes an excellent bass solo, which actually concludes the piece. We then get the second piece of music from Vertigo, “Scene D’Amour,” which, as you might expect, is a prettier piece, but still features some great wailing on saxophone. At one point, does that instrument sound like Chewbacca to you? Maybe it’s just me. Anyway, this track also includes some fantastic work on keys. And that is it for the Bernard Herrmann music.

Interestingly, the album then concludes with a piece composed by John Williams for the first Harry Potter film, “Hedwig’s Theme.” I’m not sure why there is a switch to a different composer for the disc’s final track, especially when there is a lot of other great work from Bernard Herrmann to cover, but it’s a really good approach to the piece. It begins with some nice work on piano, and it isn’t long before Carla Marciano is thrilling us on sax, even mesmerizing us. This track is way more exciting and compelling than any of the Harry Potter movies ever were.

Psychosis: Homage To Bernard Herrmann was originally released on September 6, 2019, and then in the U.S. on November 1, 2020.

Posted by Michael Doherty at 12:39 PM