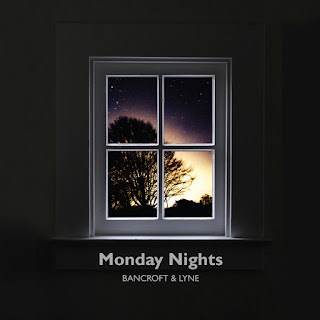 If you live with your musical partner, then being forced to remain at home during a pandemic doesn’t impede your work as much. Such is the case for husband-and-wife duo Bancroft & Lyne, who, like many artists, began performing regularly online when everything shut down in the spring. Singer and guitarist Sophie Bancroft and bass player Tom Lyne put on a series of online concerts, performing every Monday night from their home in Scotland. During those performances, they worked on some original songs, as well as some classic material, and the results can be heard on their new album, Monday Nights. The music here is jazz and folk, delivered with an intimacy and joy.

The disc opens with an excellent cover of “Is You Is Or Is You Ain’t My Baby,” written by Louis Jordan and Billy Austin. Their take on this song is ridiculously cool, particularly Sophie’s vocal performance, which has a playfully sexy quality. There is a joy to it as well. You can hear the smile in Sophie’s voice as she sings the line “The way you’re acting lately, baby, makes me doubt,” for example. And then halfway through she launches into a fun scat section, which is followed by a totally delicious lead on bass. That’s followed by Cole Porter’s “You’d Be So Nice To Come Home To,” which moves at a breezy pace, and features more enjoyable scat, this time in a couple of spots. This song mentions the moon in its lyrics, specifically in the line “Under an August moon burning above.” And I can’t help but wonder if its inclusion on this album had to do with that, what with the concerts being performed on Monday (Monday meaning “the moon’s day”), and with two of the other tracks having “Moon” in their titles. The next song is one of those, “Fragile Moon,” an original song written by Sophie Bancroft. This one has a more serious, somber tone. Its first lines are “I heard your song/A haunting cry,” and this song itself has a haunting quality. It ends with “Never finding peace/Never finding sleep,” lines that most people probably can relate to in these stressful times.

There is a delightfully playful quality to their rendition of “Underneath The Apple Tree,” a sweet number written by Michael Franks and included on his 1979 LP Tiger In The Rain. And when Sophie sings “Guess we’ve really got it made,” I believe it. Listening to this music, I can’t help but believe things might be all right after all. Then that great lead on bass seems to confirm it for us, life is good. “Miles Away” is an original song written by Sophie Bancroft. “You’re miles away/I want to reach out and touch you/But you’re miles away.” Isn’t it interesting how some lines have different connotations during this time of pandemic and social distancing? Anything about wanting to reach out to someone, anything about needing to be touched, take on greater significance these days, don’t they? Anyway, Sophie Bancroft delivers an excellent vocal performance here. And that lead on bass has such a serious sound. This song was included on an earlier release by this duo, used as a title track to an album back in 1999. That is followed by another original number by Sophie Bancroft, “Blue Room,” a captivating song. The lines that really grab me are “And the space between my fingers/Where your fingers once slipped through.” That vocal section in the second half is beautiful.

We then get an original song written by Tom Lyne, “Far From Mars,” which has a cool groove. Hey, how far are we really from Mars? After all, Rudy Giuliani claimed that some ballots in the recent election came from Mars. I’m glad to know that even people from other planets wanted Trump defeated. Anyway, this song relates a good story of a community helping a farmer realize a dream, reminding me a bit of “The Rocket,” a short story by Ray Bradbury in which a father pretends to build a spaceship to take his children to Mars. That’s followed by “Comfort,” a song written by Sophie Bancroft. This one also mentions the moon in the line “The pull of moonbeams comfort you,” a line I really like. And is the line that follows it, “Go sail the ship Serenity,” a reference to the television series Firefly? This track features a pretty vocal section in the second half, Sophie’s voice having an ethereal quality in that part. Sophie Bancroft and Tom Lyne then deliver a groovy, cheerful rendition of “On The Street Where You Live,” written by Frederick Loewe and Alan Jay Lerner. Sophie’s vocal performance is both sweet and seductive. “Because there’s nowhere else on Earth that I would rather be/Let the time go by, I won’t care if I/Can be here on the street where you live.” The album then concludes with a cover of Tom Waits’ “Grapefruit Moon,” the second track of this album with “Moon” in its title. This song was originally included on Tom Waits’ debut release, Closing Time, back in 1973. Here Bancroft & Lyne give us a pretty rendition, featuring another excellent vocal performance.

Posted by Michael Doherty at 9:05 AM