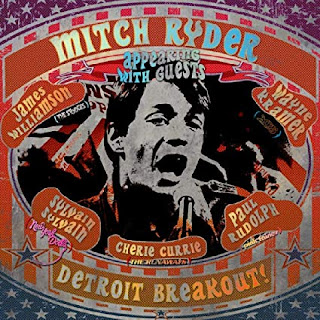 A couple of years ago I saw Mitch Ryder And The Detroit Wheels at the Simi Valley Cajun And Blues Festival, and their set was a highlight of the weekend and reignited my passion for this band. Then late last year, Mitch Ryder released a Christmas record, Christmas (Take A Ride), one of the more enjoyable holiday albums of recent years. Now Mitch Ryder is rocking again, letting loose with Detroit Breakout! This album finds him covering some classic rock and soul numbers, with special guests on each track. The album’s title, of course, brings to mind the 1966 Mitch Ryder And The Detroit Wheels LP Breakout…!!! (the album that included “Devil With A Blue Dress”).

This disc opens with a new rendition of “Devil With A Blue Dress,” a song that was a huge hit for Mitch Ryder And The Detroit Wheels in the sixties. As back then, the song is paired with “Good Golly Miss Molly,” and it rocks, with a true rock and roll sound, and plenty of good guitar work from special guest James Williamson (from The Stooges). Mitch Ryder follows that with a version of “Cool Jerk,” a song that was a hit for The Capitols in 1966. This version is fairly faithful to the original, and features Wayne Kramer (of MC5) on guitar and Brian Auger on piano, and it is their work which elevates this rendition to something special.

I am from Massachusetts, so “Dirty Water” holds a special place in my heart (they still play it at Fenway). It was originally recorded by The Standells, who were from Los Angeles, not Boston, but no worries there. Mitch Ryder’s rendition here is quite a bit different from the original, apparent right from its opening, with that screaming guitar. Mitch Ryder puts his own spin on this one, with the help of Sylvain Sylvain (from the New York Dolls) on guitar and backing vocals. The guitar is certainly more prominent, wailing above that delicious rhythm. Mitch also changes the river, moving it from the Charles to the Detroit, thus taking the song away from Boston. But I still enjoy it. Another track that really rocks is “Have Love, Will Travel,” which features Paul Rudolph (of the Pink Fairies) on guitar and backing vocals. This one has a solid and glorious and raw garage rock sound, and it’s a whole hell of a lot of fun. That’s followed by “(I’m Not Your) Steppin’ Stone,” a song that was a hit for The Monkees (one of my all-time favorite bands). Of course, this song was originally done by Paul Revere And The Raiders. There have been some interesting covers of this one over the years, including versions by Sex Pistols, Minor Threat and Johnny Thunders. Mitch Ryder really sinks his teeth into it, finding the song’s pulse and ripping it open, letting the tune loose. This version owes something to the punk versions, and features Walter Lure, who played with Johnny Thunders in The Heartbreakers, on guitar and backing vocals.

Mitch Ryder delivers a cool, unusual take on “Dream Baby (How Long Must I Dream),” featuring Cherie Currie (of The Runaways) on backing vocals. This is certainly a bit of a departure from Roy Orbison’s original version, having more of a raw sound. There is even some panting audible toward the end. I really dig this version, and like it more each time I listen to it. That’s followed by “(Sittin’ On) The Dock Of A Bay,” a song I love. Mitch Ryder does a good job with it. Here he is joined by Arthur Adams on guitar and backing vocals. Arthur echoes Mitch, and adds some other vocal riffs throughout the track. Mitch Ryder offers a jumping rendition of “Bad, Bad Leroy Brown.”  He is clearly having a good time with this one, and that means a fun time for us too. This track features Joe Louis Walker on guitar and backing vocals.

Mitch Ryder gives us his takes on a couple of Sam Cooke tunes. The first, “You Send Me,” features some really nice work by Linda Gail Lewis on piano. Mitch’s vocals have a sweet, endearing quality here. The second is a fun and lively rendition of “Twistin’ The Night Away,” with Joe Louis Walker again joining Mitch on guitar and backing vocals. I particularly enjoy his guitar lead halfway through the track. Perhaps the oddest choice of songs to cover on this album is Pete Seeger’s “If I Had A Hammer,” but Mitch’s rendition fits right in with the rest of the tracks on this disc. It has a swinging soul groove, and features some wonderful work on piano by Linda Gail Lewis, who also provides backing vocals. This track is a delightful surprise. Linda Gail Lewis joins Mitch again for the album’s closing number, “Shout.”

CD Track List
Detroit Breakout! was released on June 14, 2019 on Cleopatra Records.
Posted by Michael Doherty at 12:39 AM