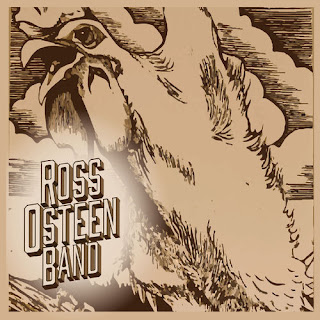 Two thirds of the citizens of this country have the blues (the other third having apparently suffered irreparable brain damage from inbreeding and tainted water, resulting in racism and stupidity beyond measure). We are living in scary and incomprehensible times. So again and again we turn to music, and often it is the blues that speak strongly to us. Ross Osteen Band’s latest release, Williwaw, provides a good dose of blues for us to sink our teeth into. This is the band’s third album, following 2016’s Glenhead Station. The band, by the way, is made up of Ross Osteen on guitar and vocals, Patrick Gaynor on drums, and Jim Vint on bass.

The back of the CD case claims “All songs written and recorded by Ross Osteen Band,” but that just isn’t quite true, is it? For the album opens with a cover of Muddy Waters’ “Mannish Boy.”  And these days I am grateful to hear someone sing, “Everything, everything, everything gonna be all right this morning.” Well, okay! The guitar that follows that line seems to confirm the truth of the statement, and I am eager to believe. And then that familiar riff, that familiar rhythm comes in, and Ross Osteen belts out the lyrics in an honest, powerful way. No bullshit here, just some damn good blues. That’s followed by “Show Her,” electric blues with a bit of attitude in the playing. Guitarist Bill Altman joins the band on this track. Ross draws out certain words, certain syllables. “Well, the stars at night start blinking, there ain’t no one else you can call/My woman, she walks with her head held high/’Cause I show her.”

“Make It” has a more fun vibe, more of a rock flavor. It also has a positive message we can grab onto, in the line “I’m going to make it anyway.” We need to keep telling ourselves just that. Ross Osteen’s vocals at moments go into John Fogerty territory on this track. There is also plenty of delicious guitar work here, helping to make this one a thumping blues rock gem. “Ain’t nobody out there giving me a sign.” Then “Little Rooster” puts Ross Osteen firmly in the company of George Thorogood, particularly the way he delivers the song’s lyrics, the way he tells us the story. This solid blues jam rocks us, making me imagine this tune is a good part of the band’s live performances. That’s followed by “A No. 1,” which also features some cool work on guitar.

“Nighttime” is a loose, enjoyable tune with something of a Bo Diddley beat. It has an air of celebration and excitement at the possibilities, as night falls. “Come on now, we don’t need no car.” That’s followed by “Willie G,” blues with a southern rock flavor, a cool tune that moves along at a good clip with a beat you dance to. On this one too, Ross Osteen’s vocal delivery reminds me a bit of John Fogerty. “Broom” then features some delicious work on drums. “Yeah, they told me that we lost the way/Ain’t nothing like it used to be now.” That’s followed by “Road I’m On.” I’m struck by the energy of his vocals on the entire album, but on this track in particular. The power of his voice seems so natural, almost effortless. The album then concludes with “Jellyfish Jam,” the only instrumental track, a kind of slow jam with a cool bass line and more good work on guitar.