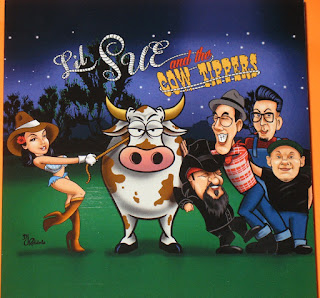 I had an excellent time a few months ago at the Roots Roadhouse Festival, and met some good folks, some who were performing that day and some that were in the audience. Though many of those who were in the audience could have just as easily been on the stage. Such was the case with a couple of folks from the band Lil Sue And The Cow Tippers that I got to talking with between acts. They gave me a copy of their self-titled debut CD, and I finally had a chance to listen to it today (yeah, sometimes work and other things get in the way of music). This EP contains a totally enjoyable group of honky tonk country and rockabilly tunes to raise your spirits and perhaps get you on the dance floor. You all have a dance floor in your homes, right? The band is made up of Susan “Lil Sue” Barrera on vocals, Danny Herrera on lead guitar, Nick Green on steel guitar and acoustic guitar, Tony “T-Mac” Macias on upright bass and backing vocals, and Aaron Fleener on drums.

The disc opens with a lively rendition of Hank Williams’ “Your Cheatin’ Heart,” here titled “Cheatin’ Heart.” Susan Barrera’s vocals have a bright, appealing sound, and it is her voice that drives the song and draws you in. There is also some nice work on guitar, though I think that lead part could have been a bit longer. This track is certainly a good start to the EP. It’s followed by another cover, this one of “Two Long Years,” written by Hugh Ashley and recorded by Janis Martin. This one also features a really good vocal performance that has a delightfully playful quality at times. I really like the way this song moves. And in fact this entire disc has something of a breezy, bopping feel. You know, no time to stand still. If we keep moving, keep grooving, maybe all the other stuff will just fade away and the world will be a brighter, more cheerful place.

We then get the first original number of the CD, “How Can You Love Me,” written by Tony Macias and Susan Barrera. Aaron Fleener gets this one going on drums, establishing a good groove and getting the song off to a fun start. It’s about receiving attention from someone you’re not at all interested in, and wondering what’s up with the guy. I love these lines: “How come you will when I won’t/How come you do when I don’t.” This track features some wonderful work on guitar, and is my personal favorite on the disc. It’s followed by another fun one, a cover of Hank Thompson’s “A Six Pack To Go.” How can you not love a song that opens with the line “Hey, Mr. Bartender, please don’t be so slow”? And I dig Susan’s delivery of the line, drawing it out just a bit. This is about enjoying your Saturday, even if you don’t, say, have money to cover your rent. A song about living in the moment, and not having any cares, even when you know trouble will be heading your way come morning. This track features some delightful work on bass and on steel guitar.

Lil Sue And The Cowtippers deliver a fun rendition of Ray Charles’ “Hallelujah, I Love Her So,” here titled “Hallelujah, I Love Him So.” Of course, there is no horn section here, but there is some nice stuff on steel guitar, and it works so well. I especially like that interaction between the steel guitar and electric guitar halfway through the track. That’s followed by the disc’s other original composition, “Where Were You,” written by Tony Macias and Susan Barrera. This one is about worrying that the man you love is being less than faithful. “Your tender loving/Is one of a kind/Don’t take that away, I’ll go out of my mind/Hey, hey there, baby, where were you last night.” Oh, how can you leave that woman at home, guessing? So cruel. The disc concludes with a seriously cool rendition of “5-10-15 Hours,” here simply titled “5-10-15.” It was written by Rudy Toombs, and originally recorded by Ruth Brown. Here Lil Sue And The Cow Tippers get good and bluesy, and Susan really digs into it vocally, belting out some of the lyrics. So delicious! This disc was just what I needed today after being rudely awakened by some men working right outside my window at 6 a.m. (hey, isn’t there some city ordinance against that kind of thing?). Instead of following my initial desire to throw empty beer bottles at them, I put on this disc, and within moments my anger was gone. Isn’t it wonderful what good music can do for us?