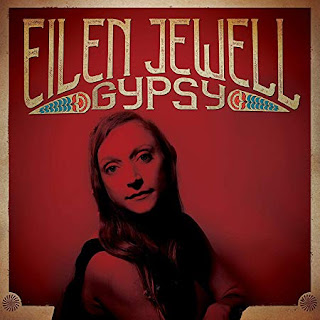 Eilen Jewell is an incredibly talented singer and songwriter based in Boise, Idaho. Her style of music is folk, with strong country elements as well as a bit of blues. On her most recent release, Down Hearted Blues, which came out in 2017, she offered covers of some delicious blues numbers. Now on her new album, Gypsy, she goes back to original material (with one exception). She plays acoustic guitar, electric guitar and organ on this release. The band backing her includes her husband Jason Beek on drums and backing vocals, Jerry Miller on electric guitar and mandolin, and Shawn Supra on upright bass. There are also several special guests on various tracks.

The album opens with “Crawl,” which immediately establishes a good strong beat before Eilen Jewell’s vocals come in. Her voice here has a lot of country in it, and it is that powerful, raw, serious country, the kind that you can dig into, that digs into you. The music also has more than a dash of blues, as she sings “I want solitude/Don’t want to be alone/Want to put down roots/Want to be a rolling stone.” This track features some nice work by Katrina Nicolayeff on fiddle. And then that electric guitar is seriously cool, that jam reminding me a bit of CCR. It’s a solid track to get things going. That’s followed by “Miles To Go,” a beautiful song with a mellower folk vibe and some good work on bass. Of course, her vocals are the key to this track being one of the disc’s highlights. I love her honest delivery here. And there are lyrics that could work for any period of time: “I’ve got a wandering soul/It takes me down the line/Ain’t got a nickel, baby, ain’t got a lousy dime/Ain’t got a nickel, ain’t got a lousy dime/Lord, I got plenty of these hard times.” Another line that stands out is “Miles and miles to go before I sleep.” Now there’s a line that should be a part of anyone’s road trip mix tape.

Then we get into undeniable country territory with “You Cared Enough To Lie,” the disc’s only cover. It was written and originally recorded by Pinto Bennett, and also recorded by Reckless Kelly (a band that was formed in Jewell’s home state of Idaho). “If you never really loved me, you cared enough to lie.” I can’t help but think of the scoundrel in the White House whenever I hear a song about dishonesty, though I don’t think that bastard cares enough (or at all) about anyone other than himself. His lies are self-serving, and he’s been doing that shit all his life. Remember how he called reporters in the 1980s, pretending to be John Barron, his own spokesman? Anyway, this track features more nice work on fiddle, and some cool stuff on steel guitar. It is followed by one of my favorite tracks, “79 Cents (The Meow Song),” which is about the inequality of pay between men and women. As serious as the subject it, the song is a total delight. “But don’t complain/Or they’ll call you insane/People call me left-wing swine.”  What I love is the way she almost celebrates being called that, for then the backing vocalists join her in singing, “Left-wing swine, left-wing swine.” If you’ve been paying attention at all lately, if you are even slightly conscious, you probably think that men suck. Hell, I am a man, and I can’t help but think we suck too, what with men like Donald Trump, Jeffrey Epstein and Brett Kavanaugh all enjoying positions of power and some sort of inexplicable immunity, getting away with horrible crimes against women (though it looks like maybe finally one of them will be taken down). By the way, the “Meow” part of the song mentioned in the title is a direct reference to that rapist in the White House. Eilen Jewell sings, “He’s grabbing us right in the meow.” What we desperately need is some strong female energy in the White House. I am fervently hoping that a woman will be leading our nation after the next election.

“Beat The Drum” eases in at first, but soon comes on strong, like a force that is moving at us and shows no signs of weakness. Good thing too, for we need that strength to pick us up, to carry us through. “If we resist, we win the fight/If we don’t persist, our hope will die/Our hope will die, our hope will die.” And there is more good work on fiddle. This is yet another strong track. “I believe in you and me/I believe in the dream.” Eilen Jewell then gives us a prettier, more delicate number, “Gypsy,” the album’s title track. This one has a comforting, relaxing effect on me, which I certainly appreciate (like a lot of you, I’ve been on edge lately). That’s followed by another unabashed country number, “These Blues.” “Some fine day these blues are going to leave me alone/But at least for now they’ve made themselves at home.”

“Working Hard For Your Love” is an interesting love song that has a somewhat darker country and blues sound. That’s followed by “Who Else But You,” a completely engaging song, intimate and revealing and beautiful, with Eilen’s vocals clearly in focus, the other musicians unobtrusive in their support of her. “Why do I play it all so safe/Why can’t I let my true face show/I don’t know, it seems I lost the way/But there’s one thing I’m still certain of/My love for you has no end.” This is yet another of my favorites. “Witness” is an adorable tune, with something of a classic rhythm. Then “Hard Times” is a bluesy song that addresses hard times directly: “Don’t want to be mad no more/Hard times, get away from my door/Don’t want to be scared no more/Hard times, get away from my door.” The album then concludes with “Fear,” a wonderful folk song that tells us “Don’t take fear to be your guide,” a good message to leave us with.

CD Track List
Gypsy is scheduled to be released on August 16, 2019 through Signature Sounds.
Posted by Michael Doherty at 8:44 PM