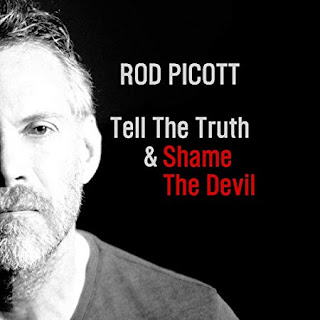 Rod Picott is a singer and songwriter from New England who is currently based in Nashville. His new album, Tell The Truth & Shame The Devil, features all original material, written or co-written by Rod Picott. If you ever needed proof that an album could have power with just a voice and a guitar (and sometimes a harmonica), here it is. Nothing else is needed here. Nothing is lacking. These songs are compelling, potent, and engaging, with lyrics that speak to the human condition, and so should speak to all of us. These songs feel both incredibly personal and universal. In addition to writing and performing the songs, Rod Picott recorded and engineered the album.

The album opens with “Ghost,” which actually begins with a rain sound effect. As always, I could do without that sound effect, and it strikes me as particularly unnecessary here on an album as stripped down as this one. Well, that being said, this is an excellent song, with some seriously good lyrics and a passionate vocal performance. Check out these lines: “I’m the punchline of my own joke” and “And the louder I yell, well, the more I’m filled with doubt” and “Now I’m alone and lonely, can’t say I’ve done my best/I could lie to myself, but I know goddamn well what comes next.” It’s a powerful and effective song. Perhaps it’s hitting me so hard because I’ve been feeling down for nearly three years now, and am not anywhere near where I expected to be at this point in my life. If you like Elliott Smith’s work, I think you’re going to love this song. I certainly do. “Ghost” is followed by “Bailing,” which paints a vivid picture of a time and place, and of a person who seems to struggle against both. “Just a poor man’s kid in a thrift store shirt/So I did what I did just to hurt.” His vocal delivery is intimate, but then I love when he suddenly raises his voice for “Route 95 shining like a diamond.” This is an album that deserves all your attention. Don’t just have this one on in the background. This track also features some good work on harmonica. Rod’s vocal delivery also has an intimate quality on “Mama’s Boy,” like he’s drawn us close to tell us a story. This song was co-written by Slaid Cleaves.

The harmonica at the beginning of “Spartan Hotel” is gorgeous and moving. This track features more beautifully intimate vocal work. There is humor to this one, with lines like “But if he could, he’d charge you twice” and “You don’t need luck to get lucky around here,” both of which made me laugh the first time I listened to this disc. “A Beautiful Light” also features some beautiful harmonica at the beginning. Something about the sound of this one makes me feel relaxed. I think it’s because of the song’s honesty. Check out these lyrics: “I guess a man will hold onto trouble when it’s all he knows” and “Now they’re a poor man’s punchline to a rich man’s joke” and “It’s a forty-hour week until you lose your heart/And you want to cut out the darkness with a knife.” But perhaps the line that pulls it all together is “There’s a thousand lousy songs that paint the hard life in a beautiful light.” “Beautiful Light” was written by Rod Picott and Ben de la Cour. That’s followed by “A 38 Special & A Hermes Purse,” another powerful song with some excellent lyrics. I am moved by these lines, which open the song: “I’ve spent half of my life fighting old ghosts/The other half trying to keep the gun out of my mouth/You wanted the truth, well, there it is.” And I love this line: “Every dream that comes true carries a curse.” If I were to quote every meaningful line from this song, I’d be writing the entire thing. These days, the depressing songs seem more appropriate, more right, more true. Don’t they?

Another highlight of this album is “Sunday Best.” This song is sweet and sad and kind of funny and human and real, everything you might want from a song. And it reminds me of my childhood, when once a week we pretended to be religious. I always suspected it was nonsense, even to my parents, particularly as there was never any joy to it for them. Here is a taste of the lyrics: “Stood in line/Crossed our hearts/And prayed that the whole thing/Didn’t come apart/The good dishes came out/And the silver did too/And everyone stopped cursing/For a couple of hours.” The album then concludes with “Folds Of Your Dress.” Check out these lines: “Wish I could find a place to hide/In the folds of your dress/Because right now I’m a goddamn mess.” Life is short, and getting shorter, and I want to just hide sometimes from whatever is coming next, to feel safe in a woman’s embrace, that place where the outside world doesn’t matter or even exist. There is a moment or two when Rod Picott’s vocal delivery reminds me of Greg Brown. This track ends with the rain sound effect again, and I can’t figure out why this would be included. Apart from these sound effects, I absolutely love this album.

CD Track List
Tell The Truth & Shame The Devil is scheduled to be released on July 19, 2019.
Posted by Michael Doherty at 10:30 PM