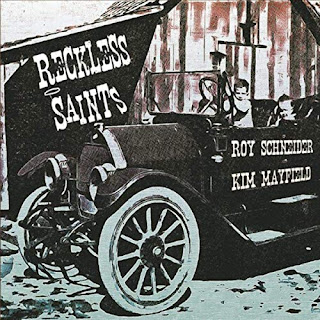 Though Roy Schneider and Kim Mayfield have been performing together for a decade, it wasn’t until 2018 that the married couple put out their first official album. Reckless Saints features mostly original material, with just one cover. Roy Schneider plays acoustic guitar, electric guitar, dobro, bass, banjo, ukulele, harmonica, and percussion. Kim Mayfield plays acoustic guitar, ukulele, mandolin, and percussion. You might think they had everything covered between the two of them, but this album features some special guests, including Gurf Morlix on one track.

The disc gets off to an energetic start with “Jump In,” and I’m totally into this song the moment it begins. It’s a fun bluesy gem with some cool work on harmonica. It moves quickly, a perfect rhythm and sound for a song about being traveling musicians out on the road. “Did we make any money/Do we know anybody/Who might let us sleep on their floor.” “Jump In” was written by Roy Schneider, and is followed by “Walkin’ On A Wire,” which has a more serious sound. “’Cause if I quit walking, I will fall.” Charlie McCoy joins them on harmonica for this one, and Keven Aland is on violin. Both deliver some wonderful work. I love the ending, with fiddle and percussion, and wish that section went on a little longer. These first two tracks also feature the work of Daniel Friedberg (known as Freebo) on bass.

Then Kim Mayfield sings lead on “If I Die Tomorrow,” which has a seriously cool and somewhat haunting country sound. Keven Aland is again violin, and I love his work here, which soars like a newly departed spirit suddenly discovering its ability to fly. This track also features some really nice stuff on electric guitar. “If I die tomorrow/Will I overcome all fears/The way I always wished I could/Through all my trials and tears.” “If I Die Tomorrow” is one of my personal favorites. That’s followed by “Subjugated Love,” a tune that seems designed to get you dancing. It has a delightful rhythm and is a lot of fun. Plus, it has some enjoyable lyrics, such as these lines: “Well, you’re giving me the creeps/And I just can’t sleep no how.” There is a cool little jam in the second half, featuring some excellent stuff on piano and fiddle. Dan Fidanze is on piano, and Keven Aland is again on fiddle. I’m guessing this tune would be a highlight of Roy Schneider and Kim Mayfield’s live performances. Then “Poison Arrow” has a pretty and engaging folk sound with some nice vocal work. This line stands out for me each time I listen to this track: “Got to shoot down anything that ain’t what we all know.”

“Ring Around The Moon” is another of my favorite tracks. I love its sweet, beautiful sound. This is the first track on the album composed by Kim Mayfield, and she also sings lead on it. “Hot summer, restless winter/We spent most of those days together.” I love the way that violin comes in, rising in a spiral up at us. J. Robert Houghtaling plays violin on this one. “I hope your life was good to you/I hope you thought about me too.” I love the way Kim pauses slightly before the second line. Then the guitar comes on strong to kick off “Angels Along The Road.” “Didn’t know which way to go/But he knew he couldn’t look back/Didn’t really understand what he’d done/But he had to hit the road alone/One eye peeled for trouble/One looking out for angels along the road.” Thomas Callahan plays bass on this track, and Roy adds some good touches on harmonica.

“Buddha Baby,” Kim Mayfield’s other composition on this release, has a comforting country sound, with Rob Pastore joining the duo on pedal steel. “My expectations got in the way.” Then “Runaway Train” comes in with a force, and features J. Robert Houghtaling on fiddle. “Let me off of this runaway train/I want off of this runaway train.” Oh yes, I think we can all relate to that need. Then “After The Storm” has a pleasant folk vibe. The line from this song that stood out for me the first time I listened to this album was “For those who go crazy right out of the gate.” There is also a bit of whistling to this one. The disc then concludes with its one cover, “Election Day,” a song written by Blaze Foley. This is a cool rendition, and it features special guest Gurf Morlix on vocals and electric guitar. Tim Coletti is on bass. “Hey, Mr. Policeman, please don’t take my stuff/It cost me too much money, and it probably ain’t enough/To get me through election day.”