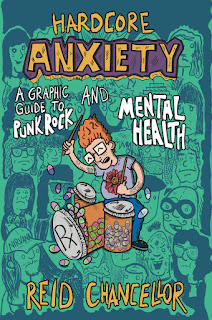 I think everyone I know suffers from anxiety these days. It’s difficult to avoid it, what with all the gun violence and children dying in cages and a moronic racist president with dreams of dictatorship and a thoroughly corrupt political party and the destruction of our environment. Not to mention whatever personal problems one might have on top of all that. And every day it seems things are getting worse. To maintain any kind of stability, many of us turn to music. And sometimes the absolute best music to turn to in these screwed up times is punk. Punk has been there for us for decades, helping us get through those terrible Reagan years, and now it is helping us survive these dark days of Donald Trump. Hardcore Anxiety: A Graphic Guide To Punk Rock And Mental Health is a graphic novel by Reid Chancellor, tackling the subject of mental health as it relates to punk music. Well, it’s not really a novel, because it’s not fiction. This is a personal account of a musician who suffered from depression and anxiety, and works through it with the help of music.

While it is a personal story and history, it is also one that Reid Chancellor recognizes is shared by many others. In fact, he directly addresses the reader early on, saying just that: “If you are holding this book then these bands and themes are as much a part of your life as they are mine” (p. 6). The book is also offered as a helping hand, with Reid writing, “I hope this book helps you understand that no matter what you aren’t alone and you can make it out alive” (p. 7). Reid himself is a character in the story, as he finds that playing in bands wasn’t fulfilling his dreams or expectations. Interestingly, one of the first drawings of him in the book (the one in which he is identified) has him looking directly at us, as if for help. And soon we learn why. He reads this message on a bathroom wall before a gig: “If you’re in a local band you should kill yourself” (p. 18).

It is a personal history, but it is also a history of the music, the two intertwined. The book gets into some of the influential punk bands, offering bits of biographical information, particularly as it relates to the subject of mental health. For example, in the section about The Ramones, Reid focuses on a 1976 interview the band gave in which they talked about writing about mental health. In one panel, Johnny Ramone says, “It’s kinda like our therapy, you know?” (p. 11). Oh yes, we know. Listening to punk music can be like therapy too, when you allow it to move your body and release energy and emotion, whether it is anger or frustration or despair or joy or whatever. And in the section on Black Flag, Reid focuses on the song “Nervous Breakdown,” commenting, “From the beginning mental health played a strong role in punk and hardcore” (p. 27). He mentions some of the troubles certain musicians have had in relation to mental health, focusing on artists like Bad Brains and Iggy Pop and Hüsker Dü.

Reid Chancellor also addresses the question of what exactly it means to be punk rock, and the concern that many people have probably had over the years of whether they are faking it, whether they are frauds. I love that Reid imagines himself (and draws himself) as a member of the Ramones, wondering, “Do you just put on a leather jacket and then you are part of the club?” (p. 36). It is a question of identity, both as you relate to yourself, and as you relate yourself to the larger punk culture, whatever that might mean. I appreciate the humor he shows in his take on his own life. One of the bands he was in was One Step, and Reid writes: “One Step always played hard. For 2 people or 200. We never played for 200 people though. So we’ll never know” (p. 75). Another example is when his fiancée calls the wedding off, she tries to cheer him up by saying, “But hey we can still get Taco Bell tonight if you want” (p. 104). My favorite line, however – and one that I think a lot of people will be able to relate to – is, “I had spent so much of my life miserable that I had no idea what I’d be like if I wasn’t” (p. 160).

Hardcore Anxiety: A Graphic Guide To Punk Rock And Mental Health is scheduled to be published on September 10, 2019 through Microcosm Publishing. Now I want to listen to some of the bands that Reid Chancellor was in.
Posted by Michael Doherty at 11:18 PM