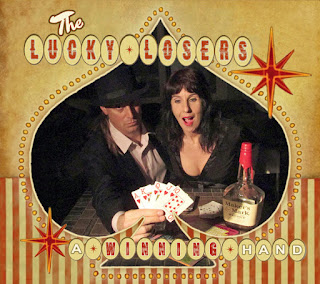 After enjoying Blind Spot, the new release from The Lucky Losers, I decided to go back and listen to the band’s debut CD, 2015’s A Winning Hand. Unlike the new album, this one features a lot of cover tunes. There are some originals too, of course, written either by vocalist Cathy Lemons or by vocalist Phil Berkowitz and Danny Caron. And some of the same musicians back them: Robi Bean is on drums, Chris Burns is on keys, Kid Andersen is on guitar and percussion. It’s an impressive debut, and certainly worth listening to, or revisiting.

The album opens with an original track, “Change In The Weather,” a fun, kind of funky number written by Phil Berkowitz and Danny Caron. It has a great vibe, and some good lyrics as well. Check out these lines: “Can you feel a change in the weather/Making clouds around your heart/A chance to dance around the subject/For the sake of playing a part.”  And these: “The weeds will start to grow among the flowers/That we planted in hopes of a better tomorrow.” Oh yes. There is some cool work on harmonica toward end. They follow that with a cover of “I Take What I Want,” the Sam & Dave song that was included on that duo’s 1966 LP Hold On, I’m Coming. It’s a fun, upbeat soul tune, and The Lucky Losers do a good job with it, with Phil delivering more good work on harmonica. Another cover follows that, Jimmy Rogers’ “What Have I Done,” a really cool blues song. I always liked the lines, “You got me coo-coo, baby/Coo-coo in my head.” Love can do that to you.

We then get a couple of songs written by Cathy Lemons, starting with “A Winning Hand,” the album’s title track. It’s performed as a duet, and I love that moment when those backing vocals come in. Lisa Leuschner-Andersen provides the backing vocals. Steve Freund is on lead guitar on this track. “This game is all I got.” Then “Suicide By Love” features some really nice work by Joe Kyle on upright bass and Chris Burns on piano. This is a cool late-night jazzy song, one of my personal favorites. I love the way Cathy delivers lines like “I was drinkin’ and druggin’ oh so well/I had my portrait taken at the city jail.”

The Lucky Losers do an interesting rendition of Bob Dylan’s “What Was It You Wanted,” giving it a perkier vibe than the original recording. Chris Burns’ work on organ is featured prominently, and Phil Berkowitz delivers some good stuff on harmonica. Marvin Greene is on lead guitar on this track. They follow that with a really nice rendition of Allen Toussaint’s “What Is Success,” their vocals blending well. Ben Rice plays slide guitar on this track. They also give us a fun version of “Baby, You Got What It Takes” and a kind of sweet rendition of Charles Brown’s “Cry No More,” both of which feature Kevin Zuffi on keys.

While on the new album, Cathy Lemons has a song titled “Take The Long Road,” on this release Phil Berkowitz delivers a song titled “Long Hard Road,” a good bluesy tune with a horn section. “’Cause I’ve been trying so hard to love you, baby/But you see I’ve got to love myself/’Cause I’ve given up pretending/To be somebody else.” Michael Peloquin is on saxophone, and Tom Poole is on trumpet. This disc concludes with two more original compositions. The first is “Detroit City Man,” a mean and cooking blues tune written by Cathy Lemons. She really gets into this one, telling us the story of a guy who maybe is less than perfect. “He had blond hair and blue eyes/He was long and lean/Everything he said to me/My god, lord, I swear he didn’t mean.” And then “Don’t You Lose It,” written by Phil Berkowitz and Danny Caron, has a classic mellow rhythm and blues vibe, and is another of the disc’s highlights. “Can you hear the whistle blowin’/It may feel like a warning sign/The past exists only in your mind.”

CD Track List
A Winning Hand was released on June 1, 2015 on West Tone Records.
Posted by Michael Doherty at 1:28 PM