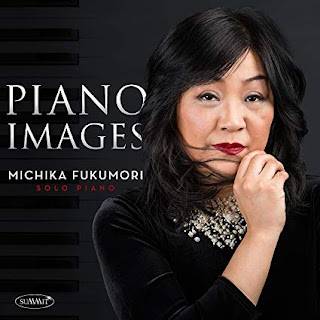 I first started listening to pianist Michika Fukumori in that foulest of years, 2016. Her album Quality Time came to me when the country was suffering through that ugly presidential campaign, the results of which still baffle and anger me daily. But the CD was just what I needed, as I tried to make sense of a country gone batty, a country eager to embrace authoritarianism, a country whose most unappealing qualities were rising to prominence. Now things are even worse out there. I am shocked that no one has dragged Donald Trump’s hideous body out of the White House yet and given the bastard the severe beating he so rightly deserves. Well, Michika Fukumori once again delivers an album to soothe some of our nerves, heal some of our wounds. Unlike Quality Time, on this album she performs solo (with one exception). And, perhaps because of that, the music has an intimate and personal feel. As on the earlier release, she gives us a mix of original material and covers.

Michika Fukumori opens this album with some original material, beginning with “Colors Of The Blues,” a cool tune combining elements of blues and jazz, with a playful sound and approach that I appreciate immediately. That’s followed by “Into The New World,” which has a light, pleasant, soothing vibe. This new world sounds like a good place to be. Then “The Answer Is…” is a mellower, pretty composition. This is the first of four tracks composing a suite titled “The Seasons.” She begins in winter, with a track that at times feels introspective and at other times is filled with excitement about what is to come. For the season of spring, she presents “The Story I Want To Tell You.” This one eases in, just as spring often gently, slowly emerges from winter, and then it grows and takes on brighter, warmer tones. This is a composition that Michika Fukumori also included on Quality Time. I’m surprised that the track for summer, “The Days We Were Smiling,” begins with such gentle, thoughtful sounds. We tend to think of summer as the liveliest of the seasons. But this is a warm and affectionate look back, a track of sweet nostalgia, rather than a celebration of the present (and hey, that makes sense, as there is not all that much to celebrate presently). “Tomorrow Is Full Of Promises,” the song for autumn, certainly has the most optimistic of titles. And, hell, I am ready for a little optimism. Eager for it, actually. And of the four songs in this series, this one does have the most positive and cheerful sound. It is making me feel ready for the future. Of course, it is also the shortest of the four tracks. Perhaps it’s impossible to keep that sort of optimism for long?

The first of the album’s covers is the Rodgers and Hart number, “Where Or When,” a song from Babes In Arms. I really like the way Michika Fukumori handles it. This track has given me a new appreciation for the song. On Quality Time, Michika Fukumori covered Antonio Carlos Jobim’s “Someone To Light Up My Life.” And on this disc, she again turns to that composer, first delivering a thoughtful, emotionally engaging rendition of “Chovendo Na Roseira,” and then a gentle and moving version of “Luiza.”

“Palco (A Little Dancer)” is an original composition, and one that I love. It has something of a familiar feel to it, like a theme from the score to a delightful foreign film. The character feels vivid, doesn’t it? There is a sense of play, a sense of fun, and a vibrant joy to the music. “My Muse” is a pretty composition, treated with a gentle touch, with compassion and tenderness and warmth. It is another of my personal favorites. That’s followed by “Oceans In The Sky,” the one track on this album on which Michika Fukumori is joined by another musician. She is joined on piano by Steve Kuhn, who wrote the number, and who also produced the album. It’s an interesting track, with a certain beauty, delivered with passion. The album concludes with Cole Porter’s wonderful “Ev’ry Time We Say Goodbye,” a song that speaks to me strongly these days, as I am often apart from the Love of my life. Michika Fukumori delivers a pretty and intimate rendition.

CD Track List
Piano Images was released on June 22, 2018 on Summit Records.
Posted by Michael Doherty at 10:19 AM