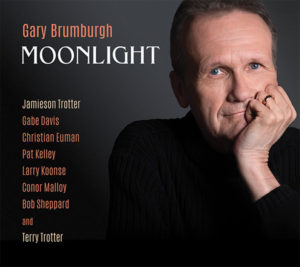 Jazz vocalist Gary Brumburgh released his first album, Up Jumped Spring, more than a decade ago, and has now followed it up with Moonlight. Why did so much time pass between releases? Gary spent a good deal of that time battling cancer, which was in his neck and tonsils. Fortunately, it did not affect his vocal cords, and the cancer went into remission in 2016. Now he’s back, and there is plenty of joy in his voice. Interestingly, in the liner notes he quotes the first line of Twelfth Night: “If music be the food of love, play on.” It’s interesting because Orsino, who speaks that line, is suffering from a sort of faux melancholy brought on by his love not being answered by Olivia. Anyway, on Moonlight, Gary Brumburgh delivers his personal spins on some familiar songs, including material by The Beatles, The Supremes and Irving Berlin. He is joined by Jamieson Trotter on piano, Gabe Davis on bass, Christian Euman on drums, Conor Malloy on drums, Pat Kelley on guitar, Larry Koonse on guitar, and Bob Sheppard on saxophone.

I love the way this album begins, with just the bass providing a cool introduction. Then, after a few moments, the familiar sounds of “Day Tripper” emerge, and soon the rest of the band joins in for a cool rendition of the Beatles tune, with a bit of swing to the rhythm, and some really nice work on saxophone. Gary Brumburgh is clearly enjoying himself, and his vocal work has a fun, excited feel, with even a bit of scat.  Just before the end, the song returns to the vocals backed by bass, and then the track ends gently, with a final note on piano. That ending works well, as the following song, “I’ll Close My Eyes,” begins quietly on piano. I like when an album has a flow like that, when the entire album is in mind as a band records individual tracks. It’s not long before this song picks up a bit, with Larry Koonse’s work on guitar. I really like Gary’s delivery, particularly on these lines: “I’ll lock my heart/To any other caress/I’ll never say yes/To a new love affair/Don’t you know, don’t you know that I’ll close my eyes/To everything that’s gay/If you’re not there/To share each lovely day.” And this track features some good work on piano.

“Dig/Sweet Georgia Brown” immediately announces itself as a fun track with that great drumming, and then those backing vocals shouting “Dig Georgia Brown.” The track is a combination of Miles Davis’ “Dig” and “Sweet Georgia Brown,” two compositions having a lot in common. As you might expect, this one cooks, and it features more fantastic work on piano. “Moonlight,” the CD’s title track, was written by John Williams, with lyrics by Alan and Marilyn Bergman, and was recorded by Sting for the 1995 remake of Sabrina. The song was nominated for several awards, but I never cared all that much for it. Still, there are things I like about this rendition, particularly Bob Sheppard’s work on sax. Interestingly, Gary follows that with another Sting song, this one written by Sting, “Heavy Cloud No Rain” from Ten Summoner’s Tales. It’s a really good version, in part because Paulette McWilliams provides backing vocals on this track.

Gary Brumburgh’s rendition of “My World Is Empty Without You” is quite a bit different from that by The Supremes (and the other versions I’ve heard). It begins with serious and sad tones, Gary at first accompanied only by Jamieson Trotter on piano and some light touches on percussion by Conor Malloy. From there, it does pick up, and it features some really nice work by Gabe Davis on bass. One of my favorite tracks is Kenny Rankin’s “Haven’t We Met.” This excellent rendition is delivered as a duet with Gail Pettis. I mentioned earlier that Gary Brumburgh quoted Shakespeare in the liner notes. Well, this song has a direct reference to Romeo And Juliet: “And I know that’s just how it happened/When Romeo met Juliet/Somewhere I read that Juliet said/‘Pardon me, haven’t we met?’” In Kenny Rankin’s original version it is Romeo that says “Pardon me, haven’t we met?” Perhaps in this version it is switched to Juliet because Gail Pettis sings that line. Because then at the end the lines are repeated, except this time it is Romeo delivering the line, and Gary sings it. This track features some damn good drumming toward the end. The album then concludes with a mellow tune, a passionate rendition of Irving Berlin’s “What’ll I Do.”

CD Track List
Moonlight was released on June 1, 2018 on Café Pacific Records.
Posted by Michael Doherty at 10:51 AM